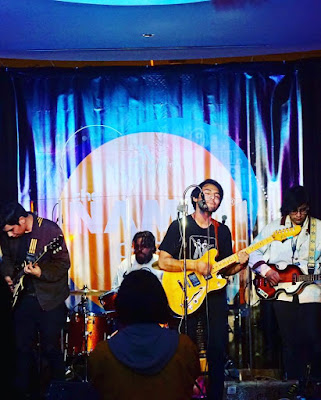 Q. When did Mind Monogram start? Mind Monogram started out as Edgar A. Ruiz's passion project in 2014 with a self-recorded/release of their debut E.P. "Moments in time" the project quickly came into fruition as a full band which now consists of Chris Caro (lead guitar) Bryam M. Mejia (drums) & Billy Azurdia (Bass)

Q: Who are your influences? as a band these are some influences we all share: The Pixies, Interpol,Beach House, The Strokes, James Jamerson, Carol Kaye, Radiohead, Grizzly Bear, Mitch Hedberg, The Biglebowski,

Q. Make a list of 5 albuns of all time
(As a band, in no particular order)
-Bloom by: Beach House
-Turn on the Bright Lights by: Interpol
-Sunflower by: The Beach Boys
-O.K. Computer by: Radiohead
- White Album by: The Beatles

Q. How do you feel playing live?
Very in the moment, & mirroring the energy in the room or crowd that we play to. It's always a completely a new but familiar feeling/ experience every time.


Q: Tell us about the process of recording the songs ?
For this particular upcoming album "Ivory Hall" we wrote the songs ahead of time and then took about a week off to record them in at Cabin Song Studios during spring 2017. It was easily the most fun and memorable experience we've had recording any of our work.

Q: Which band would you love to made a cover version of?
(As a band)
"Let me roll it" by Paul Mcartney (Wings)
Would be a fun song.

Q: What are your plans for the future?
To release Ivory Hall spring 2018 and perform in as many places as we can. Hopefully soon in Sao Paulo, Brazil!!! :)

Q: Any parting words?
Thank you Renato & TBTCI for reaching out to us & we hope to play out in Brazil one day! Much love from all of us❤️
*
*
*
Thanks