Waver with Haiku Garden - An Interview 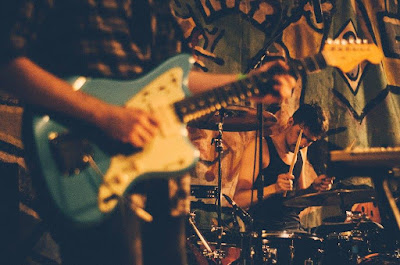 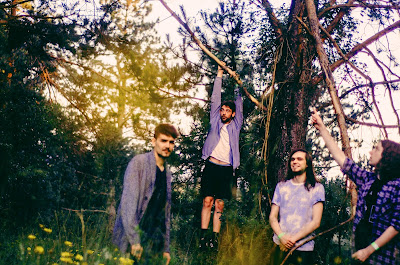 Q. When did Haiku Garden start? Tell us about the history...
LUKA: The founding three members (Anže, Klemen, Luka) met in the first year of college and started hanging out and jamming together. But the band really started in the Fall of 2014. It was at that time that we started focusing on our own material, finally got a permanent bassist (Matevž) and changed our name to Haiku Garden. Beforehand, we just played covers under a different name. We had our first show as Haiku Garden in March 2015. Since then we parted ways with our vocalist Juš, after which the other members took over vocal duties.

Q: Who are your influences?
LUKA: Our musical influences are quite varied. We definitely don't all listen to shoegaze all the time. Of course there are the classic bands that we mostly all like - MBV, Slowdive and Ride. We also dig newer gaze bands like Cheatahs and more noisy stuff like A Place To Bury Strangers. But we also share many influences that aren't in the shoegazing ballpark - Radiohead, Tame Impala, Sonic Youth and others. Klemen is also a fan of newer folk-oriented bands like Fleet Foxes, and drummer Anže simply loves The Beatles. Luka grew up on classic rock bands like Led Zeppelin and Black Sabbath. There are also classical music influences - Anže is a trained clarinetist and plays in a wind orchestra, while Luka is getting his degree in musicology, where he was exposed to a lot of contemporary classical music.

Q. How do you feel playing live?
MATEVŽ: We have the upper hand of being »shoegaze pioneers« in our home country of Slovenia, so the scene is quite welcoming. We are pretty excited about our shows in general and rarely miss a chance to present our music live. Gigs have always played a major role in our past and now we are really starting to enjoy our stage time because we are also slowly getting bettter at performing. Lots of show dates help us focus on practising and also writing new material.

Q. How do you describe Haiku Garden´s sounds?
KLEMEN: I think it's a blend of what we are currently listening to mixed with some shoegazing staples. Some songs have a more noisy edge to them and some are more somber or psychedelic. We change the sound quite a bit to complement the individual songs.


Q: Tell us about the process of recording the songs ?
KLEMEN: We recorded the EP ourselves in our rehearsal space. We rented some recording equipment and brought some of our own. We really didn't want to get into a studio to record the EP because we wanted to have full control on how the record would sound. Also we cut down the costs dramatically without having to pay for extra studio time. That allowed us to experiment and change up the record even when it was in the mixing process. The record was mixed by our friend Gregor Bajc.

Q. Which new bands do you recommend?
KLEMEN: Lately I've been getting into an Italian shoegaze band called rev rev rev. They released their second album this year and it's great. As for other genres, the new Mothers release is also worth checking out.

Q: Which band would you love to made a cover version of?
Goodbye Moonmen :')

Q: What are your plans for the future?
MATEVŽ: At the moment we are concentrating on playing live and presenting our debut EP as much as we can. During the summer we would like to record a live session and put it online. We'll probably even make a music video for one of the songs. The focus will also be on writing as much good new material as we possibly can. We would love to drop full length album as soon as possible. That will probably happen in 2017.

Q: Any parting words?
It would be awesome to see you guys in Brazil someday!
*
*
*
Thanks