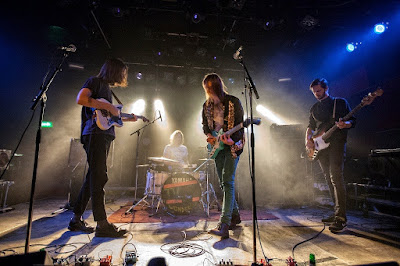 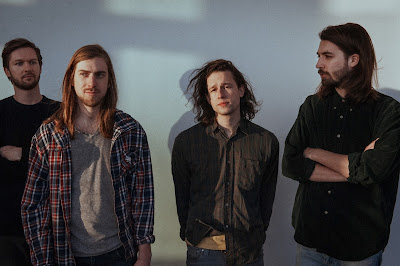 Q. When did TV Wonder start? Tell us about the history...
TV Wonder started about 3 years ago. We all met in Amsterdam because we went to the same shows. I (Tibor) first asked Teun (drums) and Marijn (guitar/vocals) to start a band with me, because I knew we had the same musical taste and I wanted a guitar-oriented band. After a short (unsuccessful) period as a three-piece, we added Stefan (also a good friend) on bass. We released our first EP in March 2015, which was sort of the starting point of playing more live shows and existing as a ‘real’ band.

Q: Who are your influences?
Our common influences are probably: Women, Preoccupations (fka Viet Cong), DIIV, Sonic Youth.
But I like that we also all have a really different taste in music, so everyone brings something else to the table.

Q. Make a list of 5 albums of all time…
Since we would never be able to make a top-5 that we could all agree on, we all made our own.
Tibor
Women – Public Strain
Arthur Russell – Another Thought
Braids – Deep In The Iris
Kanye West – Yeezus
The Dodos – Visiter

Q. How do you feel playing live?
I personally hang in somewhere between anxious and excited. I like playing live! The energy you can get from a good show is amazing. But playing with shitty sound is just nerve-racking. I would like to play some bigger venues in the future. There is no better feeling than having a full fridge just for your band.

Q. How do you describe TV Wonder sounds?
This is always a hard question.. I tend to call it experimental guitar-pop. We do have some weird elements like dissonance, tempo-changes, etc. But in the end we still try to create a listenable song.

I also really like this quote by DKFM Shoegaze Radio about us:
“The insistence and controlled chaos of Sonic Youth meets the delicacy and intricacy of DIIV.” They might have been able to put it into words better then I ever could.

The whole experience of recording in this really serious environment made us a bit nervous, but we managed to record two tracks within a few hours. Vocals were added later and it was mixed by these two amazing guys (thanks Tijmen & Laurens), who really managed to give the tracks their own sound. I’m really happy that they managed to make something unique and warm out of the rather clean studio recordings that we did.

Q. Which new bands do you recommend?
I’m gonna name some Dutch bands, because I think they are underrated and need more recognition. Everyone should check out: Torii, The Homesick, Floris Bates, Blue Crime, Apneu, Bird on the Wire and of course Those Foreign Kids, who consist of ½ of TV Wonder. We also listen to a lot of The Black Cult in the car.

Q: Which band would you love to made a cover version of?
‘Message in a bottle’ by The Police. We’ve tried it a couple of times, but it’s surprisingly difficult. The other guys have been trying to make a cover version of ‘What’s My Age Again?’ by Blink-182, but I’m glad it still doesn’t work.

Q: What are your plans for the future?
First off we are releasing two new songs through Geertruida Records (https://geertruida.net/). After that we are all heading somewhere else during the summer, so we will take it slow. But when we return we will finish the last songs for our first full-length, which we want to record somewhere at the end of the year. After that it’s straight-up world domination.

Q: Any parting words?
Not really.. Support your local scene!
*
*
*
Thanks