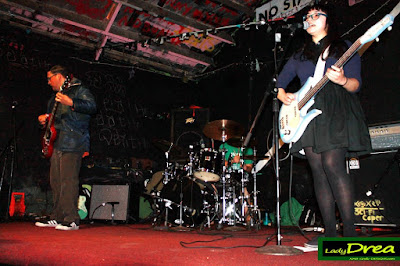 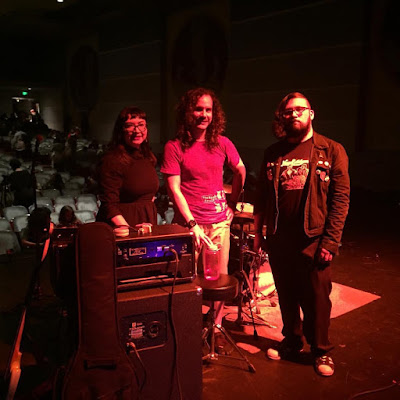 Q. When did Sci-Fi Caper start? Tell us about the history...
We started out as a two piece and put some home recordings out on bandcamp in 2011. After our first show as a duo in July of 2011 we decided to recruit a drummer. Jorge had been an old high school friend of Sams (guitar) and so we reached out to him to see if he was interested. He was down and thought his position was temporary but we worked so well together. We've been a power trio now for 5 years now.

Q: Who are your influences?
Most of our influences come mostly from 90's bands like Nirvana, Weezer, That Dog, The Breeders and a lot of others. Too many to mention to be honest. It feels as though we're still being inspired and influenced by newer bands like The Pains of Being Pure at Heart, Swearin', Terry Malts and Joyce Manor. We also gather a lot of inspiration from our friends and their bands.

Q. Make a list of 5 albuns of all time…
This is probably the toughest question to answer! In no particular order:
Weezer (the blue album)
Pavement (Crooked Rain Crooked Rain)
Terry Malts (Killing Time)
Go Sailor (Go Sailor)
The Parcels (Have a go with the Parcels).

Those are my (Emelia/bass/vox) all time faves.

Q. How do you feel playing live?
We all get a little nervous sometimes but we've been playing together long enough to have confidence in each other. It feels great once we're all in sync with each other. Sometimes it's immediate and sometimes it takes a song or two. At the end of the night, it's all good.

Q. How do you describe Sci-Fi Caper´s sounds?
I'm not sure if we can be described by any one sound or genre but we play a combination of fuzz, twee, pop and punk. I just like to call it Valley Fever Pop since we live in the central valley of California.


Q: Tell us about the process of recording the songs ?
Sam is our guitarist and brings all new songs to the table for myself and Jorge to build around. It's a fun process and sometimes doesn't take very long for us to have a full song ready and done. It's not always so easy. Some songs get scrapped.

Q. Which new bands do you recommend?
Some of our favorite new bands would probably have to be a lot of bands from the local scene. Bands like St. X and Midwest Moms. But we're really enjoying Aye Nako, Downtown Boys and Wimps!

Q: Which band would you love to made a cover version
of? We've played a lot of covers since we've been a band. We've even done a whole set of Nirvana. Bands we've covered would include Wavves, Terry Malts, Ke$ha, Diarrhea Planet, Descendents, JEFF the Brotherhood and The Blue Hearts. However, I think it'd be cool to cover some Prince at some point.

Q: What are your plans for the future?
We just released some new recordings and hope to get it on vinyl at some point. Ultimately, we'd like to tour. Even if it's just a little, touring would be wonderful! Hopefully, we can keep this going!

Q: Any parting words?
Only thank you to anyone and everyone who has every supported us! It's so very much appreciated.
*
*
*
Thanks