Motorcycle Song with Seafang - An Interview 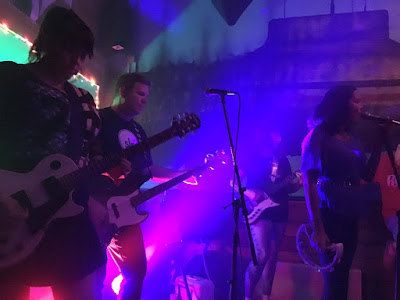 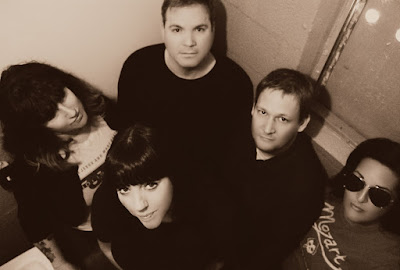 Q. When did Seafang start? Tell us about the history...
About a year ago. Stacey (guitar) and Susan (guitar) were in a band together and wanted to try something new. They shared a practice space with several other bands. It is a place where people hang out, drink beer, and talk about music. Each time I was there they had different people playing with them. One of the times Paul (drums) was playing drums and Heidi (vocals) was playing bass and singing. Heidi put down the bass to focus on a vocal part. I picked up the bass and started playing. At the end of the song I tried to give the bass back to her, but she told me to keep playing. After that practice we had a couple of songs. Everyone looked at each other knowing we had something special.

Q: Who are your influences?
We have many influences. At the moment the most obvious influences are from past bands such as The Shop Assistants, Lush, early Primal Scream, Motorcycle Boy.

Q. Make a list of 5 albums of all time…
That is a difficult question to answer. It changes based on time of day, mood, and style of music. There are so many great albums some from very obscure bands. However, here is a list of five undeniably classic albums that at the time of their release had an affect on me.
Primitives - Lovely
The Jesus and Mary Chain - Psychocandy
Pixies - Surfer Rosa
Stone Roses - Self titled
The Jesus and Mary Chain - Honey's Dead

Q. How do you feel playing live?
Playing live is fun. You get to see people's reaction to the music. It is a chance to hang out with music lovers, see other bands. St. Petersburg has a healthy music scene, but we are a little different to what is going on here musically. We're looking forward to traveling to other towns and playing with like minded bands.

Q. How do you describe Seafang sounds?
The Seafang sound is ever evolving. We hope to create good songs and melodies wrapped with interesting sounds. Some bands that dabble in shoegaze create beautiful soundscapes with bent MBV guitars, but they forget to coat it over a song. Having said that, there are no rules but the ones you create for yourself. And my rule is that the song comes first.


Q: Tell us about the process of recording the songs?
In my previous band, Honeyrider, I worked in the UK with Primitives producer Paul Sampson. I would bring in the basic song then we would experiment playing a bunch of instruments and at the end of two weeks we would have an album. Seafang is completely different in that all the spontaneity happens at the rehearsal space. There are five of us at varying levels of musicianship. By the time we get to the studio everyone knows what they are going to do. We recorded four songs at a local studio in one day, but went back to do some vocals, tambourine, etc.

Q: Which band would you love to made a cover version of?
I can't think of a reason for us to do a cover song. I think if we did it would be something that was not intended for our style of music. Going back to what I said about the song comes first. It would need to be a great song that was originally in a different style. A good example would be Lush's cover of Chirpy Chirpy Cheep Cheep. They did it right!

Q: What are your plans for the future?
We intend to record more, release more, play more, and have a great time.