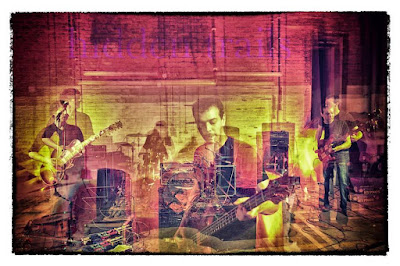 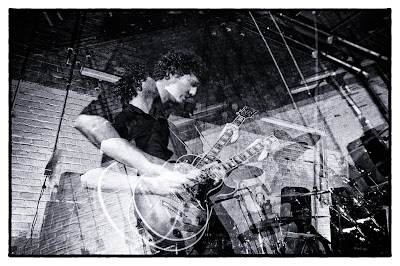 Q; When did HT start? Tell us about the history?
A; It all started decades ago when Dave started drumming on his nightstand to join his brothers band. A few years after I joined them playing a strange guitar with only 4 strings. In the meantime Jo (still a very young boy at that point) found a guitar on the attic of his grandma's house and took it downstairs. He immediately started playing some nice tunes on the porch but then disaster struck. An ominous van drove by containing an evil blues band. The band got out and kidnapped the young boy. Years passed by, Dave and me already left the scene for some time when out of the blue Jo turned up in front of Dave's doorstep. His eyes were glazed, his clothes were torn and in his claws he held an old guitar. After decades of torture (Jo was forced to play an E major scale and forbidden to play anything else!!!) he had finally escaped from the hands of the blues demons. He did this by following a hidden trail and ended up in Dave's studio. Dave didn't know what to do and gave me a call. He described the situation and asked me to come over so I picked up my bass and drove to his place. Once I got there we started playing some minor chords in odd bars and Jo started smiling again. He never left us since.

Q; who are you influences?
A; I am mostly influenced by the voice inside my head. It whispers, It shouts... but I don't feel completely comfortable talking about it.

Q; Make a list of 5 albums of all time.
A; Dark side of the moon,
Sgt. Pepper,
Live at Leeds (the who),
Are you experienced? (Jimi),
Instant Momentary Bliss.

Q; How do you feel playing live?
A; I guess it increases the dopamine level in your brain so it feels quite fine.

Q; How do you describe HT's sounds?
A; green


Q; Tell us about the process of recording the songs?
A; We play some chords (sometimes just one!), add a melody on top and press the record button. I hope not to many people learn this secret because this way it's very easy to produce an album.

Q; Which new bands do you recommend?
A; A year ago some guy recorded a song with Kanye West and Rihanna, you should definitely keep an eye on him!

Q; Which band would you like to make a cover version of?
A; I would take the band of terrorists called IS, leave out the hate, violence and religion and add some love, empathy and logic thinking. (I know this is quite an ambitious project)

Q; Any parting words?
A; I would like to thank you Renato for considering us to be a subject in your blog.
*
*
*
Thanks