Friendzone with Black Death After Sonic Massacre - An Interview 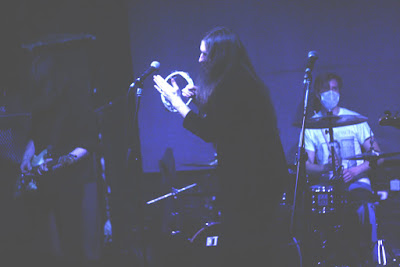 
Q. When did Black Death After Sonic Massacre start? Tell us about the history...
1). We started two years ago in 2014. I was doing a humorous video for youtube that is called "Какие Пичужки?" (Kakie pichyshki). It means "How are you doing?" for English. I made short musical movies and one of the episodes was dedicated to fictional shoegaze band I thought up. This band was called "Black Death After Sonic Massacre" and the song was called "Shum". It was derision of russian poseur bands. To cut a long story short, people liked this song and I made a decision to set up the band with the same name as the band from the video had. I offered to my fellows to join this new band, so we started our existence.

Q: Who are your influences?
2). All members of our quartet listen to Happy Mondays, The Stone Roses and Eagulls. So these are our influences.

Q. How do you feel playing live?
4). In other band wich is called Kiskin Zhar I play bass guitar and sing, and till I perfom I should care about two things: playing and singing. It brings less pleasure than perfoming with Black Death After Sonic Massacre where I should only to sing. So I feel myself more liberated and more sexual when I plaing live. I feell like my dick can reach any face of the girls from audience and stroke it.

Q. How do you describe Black Death After Sonic Massacre sounds?
5).Our sound is made up of dirty guitars, catchy drums, frisky bass, hysterical vocals and hilarious lyrics about girls and love for them.


Q: Tell us about the process of recording the songs ?
6). The last time we recordered We did two songs for 5 hours. We recorded all together
except vocal. Mixing took us 2 days. Usually we come to studio, drink a little, smoke cigarettes a little and record the songs. Sometimes we eat noodles.

Q. Which new bands do you recommend?
7). I'd like to recomend to listners these bands : Kiskin' Zhar, Weak Nerves, Mokroshelky and Lepra. Weak Nerves is my favourite young British band and others are Russian bands I like.

Q: Which band would you love to made a cover version of?
8). We would like to make a cover of Charlatans - The Only One I know and Stone Roses - Elephant Stone, but with other band Kiskin Zhar we have already done covers of Mudhoney, Nirvana, Red Fang, The Vines and Joy Division.

Q: What are your plans for the future?
9). We plan to record a single every two months and than to release The Best Of The Black Death After Sonic Massacre) Maybe we will make a tour of Russia in 2017.

Q: Any parting words?
10). I would like to say that Russian underground scene feels the rise. Many intersting bands appeared at the last three years. So, If foreign listners are interesting in extension of their musical boundaries, they may to watch my video blog about Russian Underground music wich is called "VOISE OF UNDERGROUND" or "Голос из канализации".)
*
*
*
Thanks