Reflections with Dead VIbrations - An Interview 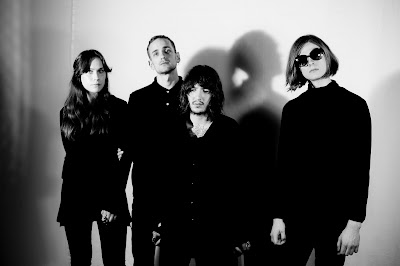 Q. Who are your influences?
(Christian) I try to make my list short..I love the early 90s shoegaze scene and when i started making
music i was a lot into 60s Garage.

(Olov) I just want to have the same vibe that the music my brother listen
to in the early 90’s had. Mostly rock, shoe gaze and swedish indie.

Q. Make a list of 5 albums of all time.
Methodrone - The Brian Jonestown Massacre
Rise And Fall - Ziggy Stardust And The Spiders From Mars
Deloused In The Comatorium - MarsVolta
Alive! - Kiss
#Untitled Second - The Telescopes

Q. How do you feel playing live?
(Elmer) I try to feel the energy in the music and move with it. Also i try not to fuck up playing the songs and to not fall over.

(Josefin) When i’m playing live it’s a mixture of feeling nervous and euphoric.


(Olov) 3 hours of panic 30 minutes of awesome.
(Christian) If the soundcheck turns out good then amazing. If not, still amazing.


Q. How do you describe Dead Vibrations sounds?
(Christian) After playing at Copenhagen Psych Fest Winter Edition a guy told us we sounded like a Dark Party. "Dark Party" pretty funny description….

Q. Tell us about the process of recording the songs?
(Christian) We always want to get in the right state of mind before recording. After pressing rec we try to make magic.

Q. Which new bands do you recommend?
(Josefin) I recommend Blonde Bunny from London. They are something unique, and to see them live was a magical experience.

(Christian) We Are Wood. Amazing music from Gothenburg!.

(Olov) Last but not least Kill West from the Echo Drug Recordings family!

Q. What are your plans for the future?
Tours, releasing more records and hopefully getting a bean shaped pool.

Any parting words?
Thanks for the interview and hopefully we´ll see you in Brazil some day!
*
*
*
Thanks