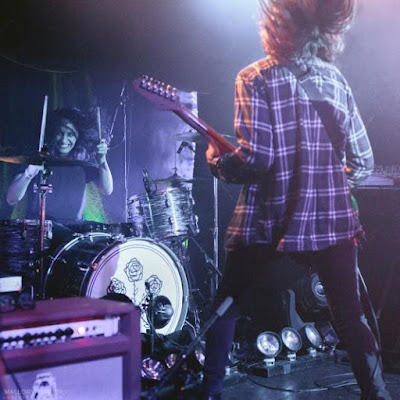 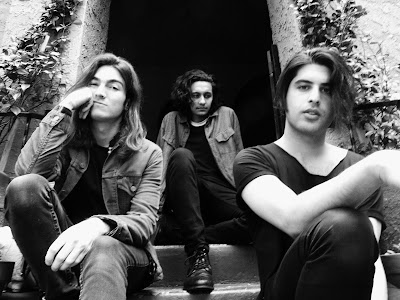 Q. When did Teenage Wrist start? Tell us about the history...
- We initially got together for the purpose of exploring new boundaries. Marshall and I have been friends since going to the same high school together in Colorado. I had just ended the "Daydream Forever" album cycle for Chain Gang Of 1974, while Marshall had just wrapped up supporting his latest Swing Hero release. I was in a position where I needed to give my mind a break from constantly being in Chain Gang world. I had always been a huge fan of Marshall's work and thought it would be cool if we got together and had some fun writing songs. It took a few months for us to find our stride. To discover what Teenage Wrist was. But once we did, we went for it and wrote the "Dazed" EP. Anthony had been playing drums for Swing Hero, so we figured it would be the perfect fit to have him in the band. It took a little while to find a permanent 4th member, but once we found Scott, we knew he was what the band needed. Here we are now.

Q: Who are your influences?
- We can all safely say that we have the same amount of love for the 90's and the early Emo movement. Personally, I grew up listening to bands like the Smashing Pumpkins, Oasis, Silverchair, My Vitriol...The list goes on and on. We also all have a love for the Emo/Punk/Hardcore scene. We came up in that world as early/late teens. The older you get, you discover new sounds. The discovery of Shoegaze was a pivotal moment. That now plays a big part in what we do, and what we do in all our own separate projects.

Q. Make a list of 5 albuns of all time…
- That's always a very difficult question. Here are a few off the top of my head:
1) The Cure - "Wish"
2) Tears For Fears - "Songs From The Big Chair"
3) New Radicals - "Maybe You've Been Brainwashed Too"
4) My Vitriol - "Finelines"
5) Smashing Pumpkins - "Machina/The Machines of God"

Q. How do you feel playing live?
- We love it. It's been such a nice change from performing live with Chain Gang Of 1974. When I'm touring behind that project, there are so many factors that come into play (laptops, keyboards, etc). Teenage Wrist is pure Rock music. We plug in, turn our amps up really loud, and play our hearts out. It's a beautiful thing.


Q. How do you describe Teenage Wristsounds?
- Loud & beautiful

Q: Tell us about the process of recording the songs ?
- Honestly, it's whatever feels right. We start a lot of ideas that never get finished. I feel that we all have a sense of what will and won't work for our band. We instantly know when a song is special to us.

Q: Which band would you love to made a cover version of?
- Anything by the Pumpkins would be cool. But maybe we'll fuck with everyone and do a Weird Al cover...

Q: What are your plans for the future?
- Honestly, we have no idea. We have a lot of new music recorded, and hope to begin work on a full-length record. We all have our separate projects going on, so sometimes it's a bit difficult to tell what we will do next. But that's the beauty of Teenage Wrist. It started as a side-project, and has slowly turned into a real band." As long as we keep having fun, we'll keep doing this.