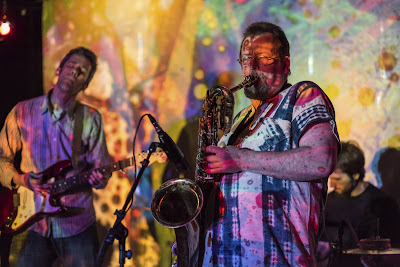 Q. When did San Kazakgascar start? Tell us about the history...
San Kazakgascar formed in 2006 in Sacramento, CA. We started out as a trio with myself (Jed Brewer), Paul Takushi, and Greg Hain. We agreed to play a small festival in Chico before we had any songs. I thought if we forced ourselves to come up with half a dozen songs in 2 months we would be more motivated. I had this idea for a quasi-Middle Eastern psych band, but didn't actually know if we could come up with music that satisfied that curiosity. We added Mike Woo (clarinet) shortly thereafter.

Q: Who are your influences?
The main influence would have to be KDVS 90.3 FM in Davis. I DJ'd there as a student and it opened my mind to all kinds of possibilities. I continue to listen to the station to this day. When we formed Kazakgascar, there were two DJs, specifically, who gave me inspiration. Brendan Boyle did this show of "international psych" and Gil Medovoy does more traditional Middle Eastern, south Asian stuff. As far as specific artists, I would say Savage Republic, Sonic Youth, Om Kalthoum, Thinking Fellers Union, Thin White Rope, Camper Van Beethoven, and Erkin Koray would be the big influences.

Q. Make a list of 5 albuns of all time…
How about 500? Off the top of my head, five of my favorites would be Beatles' Revolver, CCR's Willie and the Poor Boys, Sonic Youth's Daydream Nation, Bee Gees, etal Saturday Night Fever, and Metallica's Kill 'Em All.

Q. How do you feel playing live?
I love playing live , but also beat myself up about it not always being good enough. About 3 years ago, I decided to get rid of my shitty vocals and go instrumental. Now I can focus on guitar wanking or just grinding one chord into the ground.

Q. How do you describe San Kazakgascar sounds?
When people ask me to describe the band, I usually say that it's "fake Middle-Eastern psychedelia." It sounds pretentious, but that's the most honest answer I have. There are songs that sound more Eastern European and some that sound less Eastern, and more like the Velvet Underground, Can, or whatever. We've never claimed to be authentic in any way. We're just approximating melody, phrasing, and rhythms from traditional music, and putting it through our white dude indie rock blender.


Q: Tell us about the process of recording the songs ?
The first album, Greetings... was recorded at a nice studio and it's big sound reflects that. The 2nd one, Idle Ships, was recorded at a makeshift studio by Andy Morin of Death Grips. He worked really fast, which I liked. Since then, all of our recordings have been done by our bassist Greg. We record basic tracks at our practice space and then do overdubs and mixing at his tiny house. Most of us are in our 40s and have a limited amount of time to work on stuff, so we peck away at overdubs and mixing on weekends. Greg has become a masterful home recorder/mixer. With the current EP, we only spent only 2 hours recording the basic tracks and then about 4 months of squeezing in overdubs and mixing when we could.

Q. Which new bands do you recommend?
I'm not keeping up with stuff as much as I once did. Some of my friends have excellent newish bands. Vasas, from Sacramento, have great 60s-style pysch-pop songs. ALTO! from Portland are a great experimental, but somewhat accesible band. I just heard Sunwatchers for the first time the other day and really like them.

Q: Which band would you love to made a cover version of?
Not sure about this one. It would be fun to cover something that sounds nothing like us and give it our flavor. The Thinking Fellers Union's cover of "Green Eyed Lady" and the Joggers' cover of "Magic Man" are really great examples of taking a classic rock song and making it a born again freak.

Q: What are your plans for the future?
We've settled into a new line-up. It's me, Greg, Chris Hall, and Robert Kennedy. It's pretty much the line-up you hear on Twice-Baked Coma. We want to keep pushing the all-instrumental version of the band and explore some different instruments and collaborators. Sometimes I get a little neurotic in which directions I want to push things. I want us to further explore weirdo jazz, but also really loud approaches and really quiet approaches.

Q: Any parting words?
Thanks for covering the obscure dream-weavers of the world!
*
*
*
Thanks