Points of Light with Sentinel - An Interview 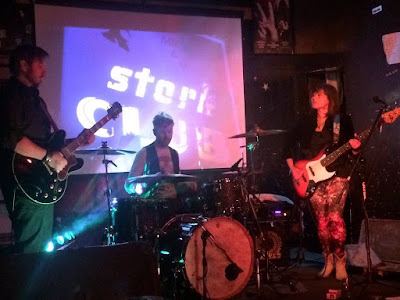 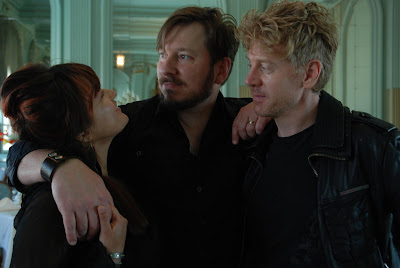 Q. When did Sentinel start?
We started way back in Long Beach, California in 1999, when I Dennis and Tarabud started a side project on a 4 track recorder, all centered around her vocals and my guitar sound.

Tell us about the history...
We have been playing the Bay Area club scene since 2005, but I we go way back, I began playing music in high school when I taught myself guitar and fronted a rock band with some friends from high school. We wrote all original songs and performed in Long Beach and Los Angeles. Tarabud began an interest in music in elementary school learning violin, then later taught herself guitar from a Beatles song book, and all the while joining school choirs all up through High School. When we first started Sentinel as one of my side projects she only sang, but I encouraged her to play bass out of necessity that Sentinel came together for live shows. We have had a few drummers, but Billy has been around the longest, and is now a regular member. He picked up the drums after a few lesson once he moved to the Bay Area from Colorado. Since then he played in several local indie bands till we all met and he joined Sentinel in 2010.

We have played tons of shows with Billy in the Bay Area, and even performed live on college radio! We always struggle to pick the best live set, only cause we have so many songs to choose from our catalog. Eventually we agree on 10 song set.

We could play a two hour concert with all the material we have composed over the years. That would be incredible of course!

Q. Make a list of 5 albums of all time…
Blue Bell Knoll by the Cocteau Twins,
The Joshua Tree, by U2
Killing Moon, by Echo & the Bunnymen,
Nebraska, by Bruce Springsteen
Into The Labyrinth, by Dead Can Dance,
& one more from Tarabud
Glow, by the Innocence Mission

Q. How do you feel playing live?
We feel energized and at the same time transported. It’s wonderful to be on stage sharing our music live with fans and audiences. We always start out a little nervous, but settle into what we do by the second song of our set.

Q. How do you describe Sentinel sounds?
Sentinel, is an indie-dream-pop ruckus of Dennis’ driving guitar melodies and the soothing Tarabud vocals.


Q: Tell us about the process of recording the songs?
Sentinel albums are a labor of pure love, since we do it all ourselves from start to finish. We write the original music pretty much starting with acoustic guitar melody or a piano melody and build from there, chorus/verse or vice versa. Usually lyrics come last. When we have a certain amount of songs we feel good about we begin recording. Mostly we have recorded all our albums in our home studio. Dennis being a pro recording engineer; we get our signature sound from his engineering skills. At the end of that process, we often send completed albums for mastering. Finally, we create the art work or find an artist that would like to have his art on the album! We finally get CD’s printed. For an indie band like us, we often struggle to be heard by the masses, but we have built up quite a following over the years of doing on-line promotion ourselves, and with the support of Podcasters around the world, not to mention DJ support from college radio stations and Bay Area tastemakers like the influential Aaron Axelsen of Live105 FM, somehow we get our music out!

Q. Which new bands do you recommend?
Joy Formidable from UK, In Letter Form from San Francisco, California, Liss from Denmark.

Q: Which band would you love to made a cover version of ?
Lips Like Sugar by Echo and the Bunnymen

Q: What are your plans for the future?
We plan to release a new album which will be much more laid back and dreamy than our previous albums! We will be shifting away from pure rock styling.

Q: Any parting words?
Thanks for sharing our music with your audiences! Real treat to be featured with you!
*
*
*
Thanks