Cohabitation with Surf Vampires - An Interview 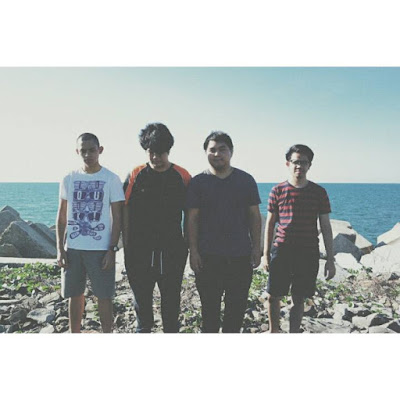 Q. When did Surf Vampires start? Tell us about the history...
Surf Vampires just started this year, back in April. The name Surf Vampires is just a rechristened name of my previous recording projects which I started back in 2012. The project was then called Beatnik Economy, which was me trying to do this weird post-punk stuff. Then in 2015, I changed the name to Beached, which was just me playing straight indie pop with a mix of psychedelia.

In 2016, the project underwent another name change in the early months of January, under the name of Low Real. It had this Radio Dept dance-y dream pop sound going on and I sent these demos to a bunch of small time labels. Most of the demos got rejected, which prompted me to lay low for a while.

I then started writing again last April, now renamed as Surf Vampires and posted 15 second demos on Instagram. Some of these songs would lay the foundations for Lush. I invited my old schoolmates, Akram, Niyaz and Daniel, whom I’ve been jamming with for some time and got straight into practicing these demos. I wrote and recorded Lush and we literally just printed 30 CDs of it and gave it to our friends for free, hope that the word of mouth between these guys would spread around.

After some positive feedback, I wrote down a couple of more songs in mid-April for another EP we were working on called Cohabitation. After releasing the two EPs in Brunei, we just uploaded both of them on Bandcamp as a digital album with a 'name your price'. Then the project got this small hype going around and that’s basically how this recording project of mine went off.

Q: Who are your influences?
Major influences of mine mostly came from old C86 bands such as the Wake and Obama-era bands like Beach Fossils and Wild Nothing. These guys helped me a lot in my song writing

Studying A Midsummer Night’s Dream during college also helped me in trying to get that dream-like atmosphere. There’s this youthful feeling from that play that kind of got stuck with me every time I write songs.

Q. Make a list of 5 albums of all time…
This is going to be a weird list but here you go
1. Slipknot - Slipknot
2. Blue Train – John Coltrane
3. Nocturne – Wild Nothing
4. Moment Of Truth – Gang Starr
5. Discovery – Daft Punk

Q. How do you feel playing live?
Since the project just started under a new name, we didn’t get much gigs until recently. But when we do get gigs, there’s this weird mix of anxiety and relief when I’m on stage. I’m not sure about the other guys though.

Q. How do you describe Surf Vampires sounds?
Sombre and melancholic, but that gloomy atmosphere is smeared with this layer of nostalgia fueled stories filled with youthful romances.


Q: Tell us about the process of recording the songs?
Lush was recorded by myself while Cohabitation was done collectively. I recorded raw drafts using this white Behringer USB adapter which was plugged into my laptop that was running FL Studio 10. I sequenced the drums in FL since I couldn’t afford a drum kit.

There’s this insane close gap between the two EPs in terms of release dates. We were rushing it so we could promote it locally once everything was done.

The one that took most of the time of the recording process was me making all these raw drafts for the EPs. Then we would just try to re-record them to make them sound polished as possible since we couldn’t afford to rent a studio.

After recording, it’ll be just me sitting in my bedroom listening to these tracks over and over, tweaking with the equalisers and frequencies until I was satisfied with all of them.

Q. Which new bands do you recommend?
I heavily recommend this Bruneian psychedelic folk band called Tropical Hornbills. They haven’t released a load of songs, but they’re worth checking out.

Q: Which band would you love to made a cover version of?
Personally, I would absolutely love do an album of just us re-recording Rubber Soul by the Beatles but in a slow tempo and drenched in this heavily reverberated ethereal sound. It’ll be crazy fun.

Q: What are your plans for the future?
Just try our best to play at shows as much as possible before university starts. I’ve written a couple of songs but I’d feel like I’ll rush things. Maybe just let all this simmer in for a while.

I’m hoping that I get to re-record the songs in a studio and release an album under a label. As of now, we aren’t signed to anyone. And we’re hoping to play in bars or small festivals around Asia since the region here has this crazy following on indie pop. But we’ll see.

Q: Any parting words?
Just a big thank you to Renato Malizia for taking the time to do this interview. I really didn’t expect someone from Sao Paulo to actually notice us since this recording project is so new. God Bless.
*
*
*
Thanks