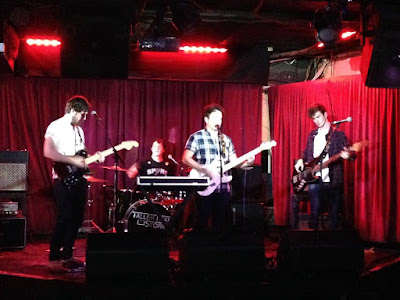 
Q. When did Tibican start? Tell us about the history...
Tibican is made up of Dom, Pete, Cathal, Tom & Marc.

The band started as my (Dom) solo project in December 2014 while studying at university. After attracting some attention from BBC Introducing I started receiving offers to play shows, so asked around to see who would be interested in getting involved. At the time I was living with Pete (guitarist) and started talking to him about what was going on. He, along with Cathal and Marc (who I had been in bands with in the past) soon made up the beginning of Tibican as a ‘band’. During the summer of this year we were looking to bring in an additional member and Marc introduced us to his friend Tom.

Q: Who are your influences?
We all listen to different types of music but our main influences would probably be: Foals, Wolf Alice, The Maccabees, The Smiths and My Bloody Valentine among many many more. We could go on forever!

As a guitarist, I’ve always loved the tones that guys like Kevin Shields and J Mascis have brought to the world. I was exposed to these guys very late on and prior to them I loved the intricate rhythmic layers that Yannis and Jimmy from Foals use to build momentum and drive melodies into you.

Q. Make a list of 5 albums of all time…
It’s almost impossible to choose but if we had to, it would be something along the lines of:
1) Foals – Total Life Forever
2) Muse – Absolution
3) Fleetwood Mac - Rumours
4) The Maccabees – Given To The Wild
5) The Smiths – The Smiths

Q. How do you feel playing live?
We love playing live. It’s our favourite part about doing this! It’s always so rewarding to show people what we have worked so hard on.

Q. How do you describe Tibican sounds?
I would say the music is somewhere in the region of indie/alternative with slightly more ‘pop’ elements at times. I think the earlier stuff we put out was heavily influenced by shoegaze artists like My Bloody Valentine (and we still are) but as we evolved we have started to experiment with ‘poppier’ tones and are really enjoying what we’ve come up with.


Q: Tell us about the process of recording the songs?
At the beginning I would vaguely write all the parts for everyone and then take it to the guys. From there, they would put their own take on it and then the song builds from there. As we’ve developed and we brought in Tom the process has changed. Sometimes it will be as before. Other times maybe a verse or chorus will be finished and then the others will give me their thoughts and we’ll take it from there.

When it comes to recording we always get the main idea down quickly. Then we go about recording each instrument individually, making sure it’s as tight as possible. I’ve always mixed and produced the tracks once we all agree they’re finished musically.

Q. Which new bands do you recommend?
I really like what I’ve heard from As Elephants Are and NZCA Lines. The Coronas’ single really caught my eye when I heard that.

Q: What are your plans for the future?
We’re currently in the process of building up to the release of our first Charity Single titled ‘Your Kisses Work’ in aid of Lupus Awareness. Lupus is a chronic and currently incurable auto-immune disease believed to be affecting thousands of people throughout the UK and about 5 million throughout the world, of which 90% are female.

We contacted three Lupus charities (Lupus UK, The St. Thomas’ Lupus Trust & The Lupus Foundation USA) with the aim to release a song as a charitable release with profits being shared between the charities.

The song will be available to buy on all major online download and streaming services later this year.

Q: Any parting words?
We would like to thank The Blog That Celebrates Itself for getting in touch with us and featuring us on the site. Being based in London, UK we are amazed our music has reached across the world and into Brazil. We hope one day we can come and play some shows.
*
*
*
Thanks