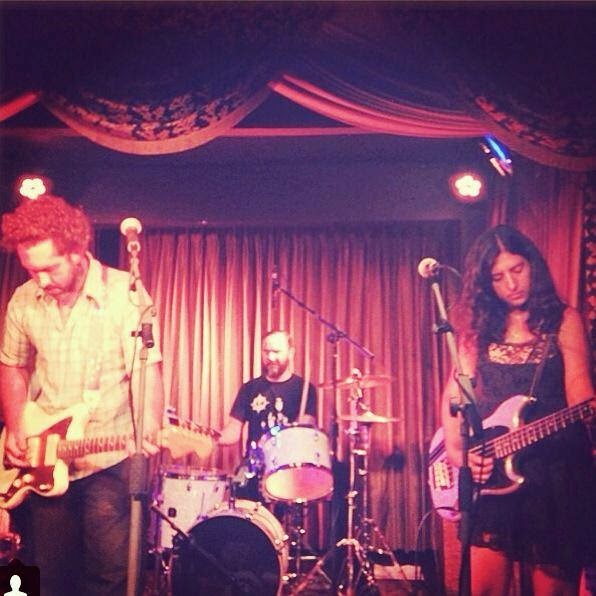 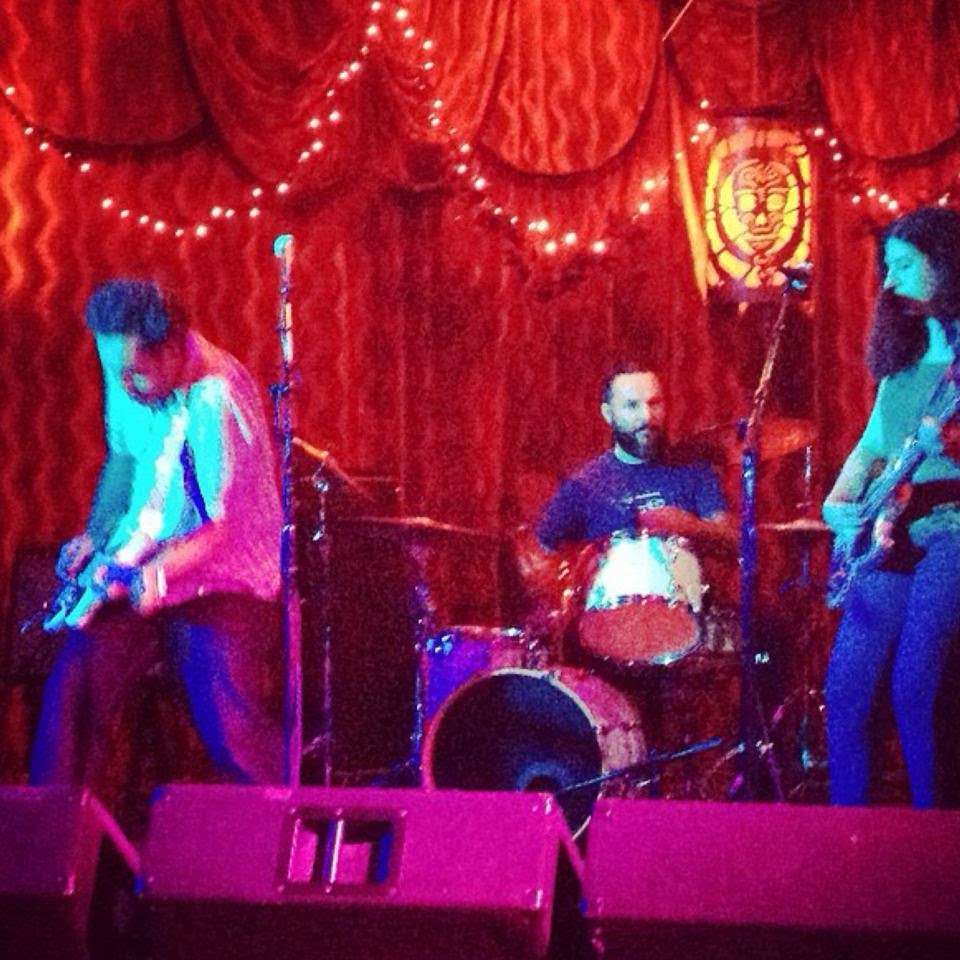 Q. When did Space Waves started, tell us about the history...
We (Sarah and Kelley) started recording original songs in October 2008, after some months of sort of jamming together and playing along to songs. We started off as housemates and Kelley had a home studio setup. After recording three songs together we figured we could release an EP, and have kept it going since then. We're currently working on our 4th album. We worked with drummer Mark Loftin on our 2nd and 3rd albums, and since moving back to my hometown of Long Beach have been playing with Brandon Werts on drums. We've moved back and forth between Los Angeles and Oregon a few times but are back in SoCal for good now.

Q: Who are your influences?
I think we have a lot, both individually and collectively, but thinking back to when we had started playing together, we would play along to bands like the Cure, Slowdive, Mazzy Star, Galaxie 500, Jesus and Mary Chain, so I guess a lot of 90s-ish bands. Bands that a bass player and guitar player could crank and play along to. We also love a lot of classic rock like the Doors and Led Zeppelin, Black Sabbath, AC/DC. I played flute in school orchestras since age 7 and throughout high school played in a steel drum band, so I guess I have that background too, and I picked up bass in my previous band. Kelley played in some bands in high school and after and has played piano and guitar forever, since ages 4 and 10. Before we started playing together he was heavily into synths, but favors guitar now. Our drummer who started playing with us after we moved back to California has more of a hardcore/metal/jazz playing background, quite diverse there. Some other inspirations might be Cocteau Twins, Bob Dylan, Nick Drake, Neil Young, Luna, the Smiths, Black Heart Procession, Bedhead, Hum, Joy Divison, Labradford, Television, Nirvana, Yo La Tengo, Roy Orbison, Interpol, the Velvet Underground, Elliott Smith, Jimi Hendrix, Pulp, Spacemen 3, the Chills, the Clean, Dick Dale, BRMC, Opal, New Order, the Beatles, Portishead, King Black Acid, Swoon 23, the Stooges, Suicide, Tears for Fears, T. Rex, Songs:Ohia, the Wedding Present, Seam, and tons I'm leaving out!


Q. How do you feel playing live?
Mostly good. It depends. I myself tend to feel awkward at times but I try to have fun and just play and sing the best I can. A few times we have been interrupted after a song or two and told to turn down. At one show this guy kept tapping my hand as I was playing and kept trying to tell me to sing louder. Stuff like that can be kind of annoying. I've also developed a small fear of being shocked or having sudden ear-piercing feedback, and live I tend to worry about how it's sounding, especially my vocals. It's rare that we get a soundcheck. I used to be really shy about singing in front of other people. If Kelley hadn't encouraged me, I doubt I ever would have started. When I was younger I would get performance anxiety and it's something I've had to work on. On the positive side, it can be fun to meet new bands/people and to play in front of people, instead of just in our house or studios. So, long story short, I'm not really a natural performer/entertainer, but I do love playing and creating music, and for the most part playing out is worth whatever hassles come with it. That is just me, though. As a band we seem to have a good time. I mentioned before that we have moved around quite a bit and we had a long-distance drummer for awhile, so with Brandon this is the longest time we've had a consistent in-town drummer and it's been great being able to work all together on the songs. I think we are developing dynamically and are getting a good sense of when something sounds right or when it sounds off. 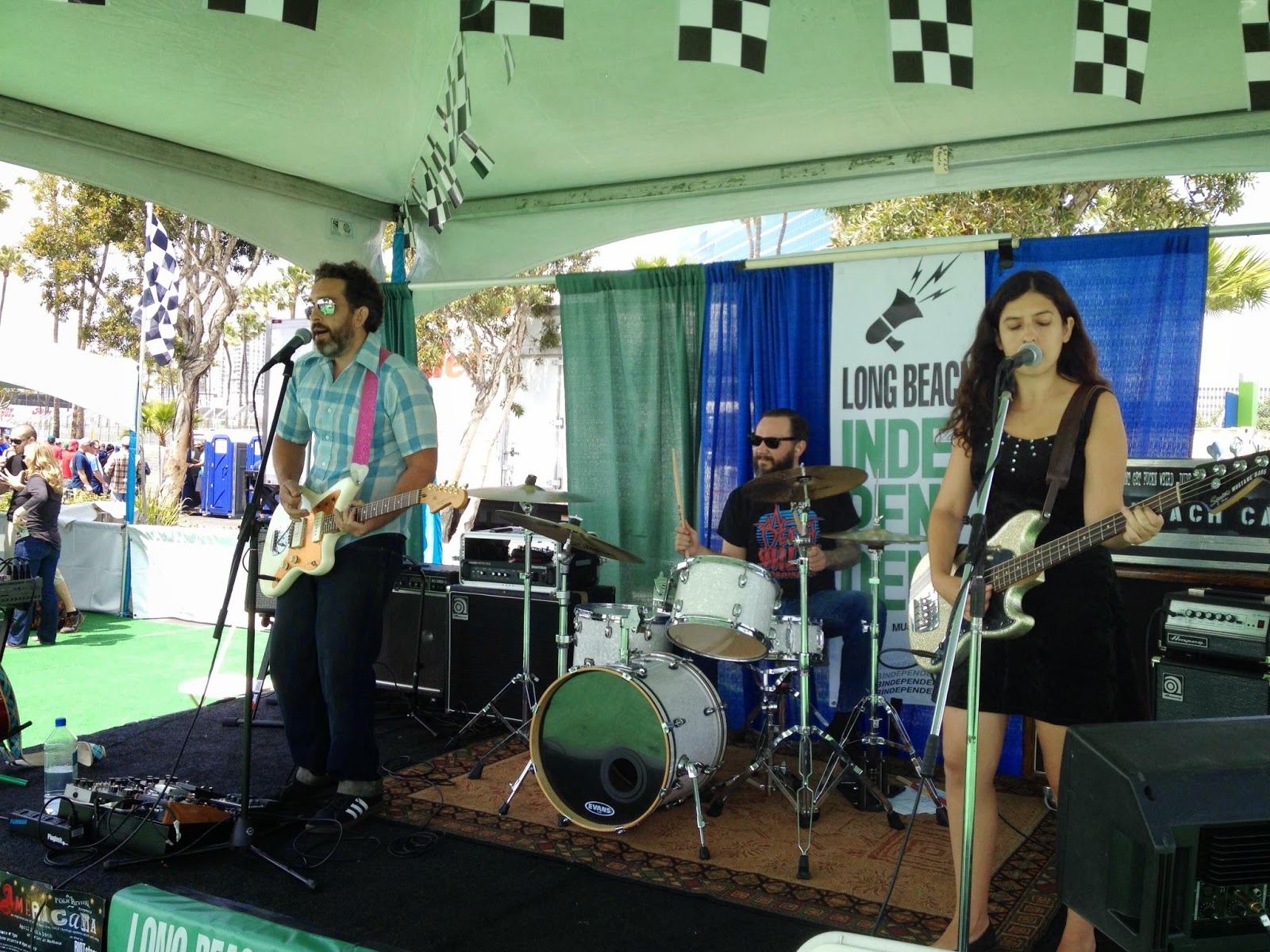 Q. How do you describe Space Waves sounds?
I usually just say it has psych rock and shoegaze influences. We've gotten comparisons with Slowdive, Spacemen 3, Loop, Sonic Youth, Jesus and Mary Chain, someone recently said Beach House, the other day someone said MBV. Someone once said Kelley's guitar playing is like alien surf rock.

Q: Tell us about the process of recording the songs ?
Oh boy. Well we have released an EP and 3 albums so far. Our first EP and album Kelley engineered, mixed and mastered himself. The EP was put out when we lived in Oregon, and the first album was made when we lived in Los Angeles. For our 2nd album, You Can Ride a Beam of Light Like a Musical Strum, we had moved back to Oregon and he engineered it in our basement. By then we were working with Mark Loftin on drums (he's been in Foxtail Somersault, Morning Spy, Schwerma, and probably more I'm forgetting). He lives in San Francisco so we had a long distance band with him. Kelley and I would write songs, record demos, send them to Mark, then he would learn them and practice along, then come up to Oregon for marathon weekend playing/recording sessions, and the occasional show. However it started getting a bit out of hand for Kelley and we hired Larry Crane to mix the album and Garrett Haines to master it. Then, since we continued writing songs, we started working on a 3rd album, pretty much while we were still finishing up the 2nd one. Kelley didn't want to engineer it so we again worked with Larry Crane and recorded half of it with him at his studio Jackpot! in Portland. During this time we moved back to California so we recorded half down here in Long Beach. Then we traveled back to Portland to mix with Larry and again sent it to Garrett Haines for mastering. But that is all just the logistics, of course there is the whole mystery of where songs even come from and all that, but I guess that is more of the songwriting process. We tend to have songs written and rehearsed before we record them, and record bass, drums, and guitar live and then overdub vocals and any extra parts. Sometimes recording is part of the songwriting process. Sometimes the songs have to marinate awhile before other parts come up for them. Each one is different really. And now that we have an in-town drummer, it is changing the process. Q: Which band would you love to make a cover version of?

Well we've done quite a few already. There's a cover of the Doors 5 to 1 that is on a compilation. We have performed tribute nights for Mazzy Star and Joy Division and we have played "Slowdive" by Slowdive, mostly just for fun at practice but we did play it out once. "Bells Ring" by Mazzy Star was an early cover song we recorded. I think the Doors song is the only one that we changed. It's slower and shorter and simpler, done on a whim from memory one day, and we ended up submitting it. Going forward, I'm not sure, we don't tend to play covers out and don't have any plans for covers, unless we finally do the Led Zeppelin's "Achilles' Last Stand" one that Kelley's been wanting to do.

Q: What´s the plans for future....
We are working on a new album, our 4th and our first one with Brandon on drums. We've recorded demos for everything (11 songs) and are figuring out how to finish it. We are very excited for it. We were recently approached by a new label here in Long Beach called Leg Records that will release something of ours on cassette. I've written two other new songs and I think Kelley has some he's working on so we will have those to work with in the more distant future. We have some shows coming up in Long Beach (March 28th at the Prospector with Bad Vacuum, Wind Burial, TBA, May 7th at the Prospector with Miss Massive Snowflake, TBA) and hope to play out more around town and maybe L.A. Tour is always appealing but I'm not sure how realistic it is. We'd just like to keep it going and to keep exploring and evolving musically.

Q: Any parting words?
I guess I should say that we have our 3rd album Sing My Song available on vinyl. It is our only vinyl release so far. We also have CDs available of that and our other releases. Thanks for the interview! Cool blog. Oh, and links:
ttp://spacewaves.bandcamp.com
http://www.facebook.com/spacewaves
http://www.soundcloud.com/spacewavesss
*
*
*
Thanks
Postado por TBTCI às 12:41