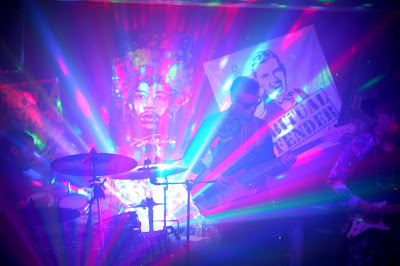 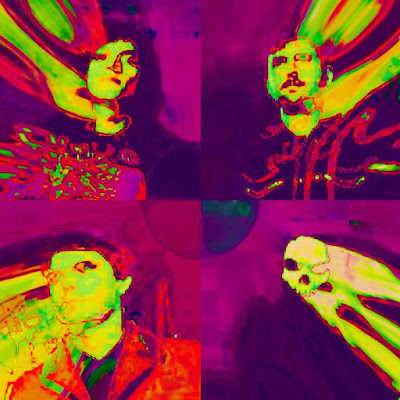 Q. When did Astral Lite start? Tell us about the history...
A.) We started just this year, in April of 2015. Over the summer we worked on some songs, released our first single in July, and played our first live show in September. Since then we've made a big splash in our local music scene despite the fact that the local scene has never championed a shoegaze/psych band. Many people have thanked us for bringing something new to the area. We've been playing a handful of shows around Northwest Florida and we're hoping to play in other states by next year.

Q: Who are your influences?
A.) Each member is influenced by different things. We all share a common interest in bands like the Velvet Underground, Sonic Youth, Dinosaur Jr and My Bloody Valentine. But we each also bring our own element of influences to the band. Johnny Palmer (lead guitar/vocals) brings the heavy post-punk and goth influence from The Cure, Joy Division and Bauhaus, both vocally and instrumentally. Josh Thompson (2nd guitsr vocals) brings about guitar tones that channel more ambient acts like Boards of Canada and Seefeel. And both Ricky Stanfield (bass) and Chris Riot (drums) bring their love of Black Sabbath into the mix.

Q. Make a list of 5 albuns of all time…
A.) (This is the top 5 albums of lead guitarist/vocalist Johnny Palmer.)
The Cure - "Pornography"
The Brian Jonestown Massacre - "Methodrone"
Velvet Underground & Nico
Slowdive - "Souvlaki"
Sonic Youth - "Evol"

Q. How do you feel playing live?
A.) Playing live is a different experience every time. The songs never sound the same twice, and onstage we tap into our cosmic creativity via improv. That's where the real magic happens. You could say we're sort of a "shoegaze jam band".

Q: Tell us about the process of recording the songs ?
A.) So far, we've only recorded DIY for our upcoming first EP. In Ricky and Josh's garage on Johnny's laptop. During the recording of our Soundcloud single "Velvet Phobia", we recorded the percussion first, then the bass, and built our lush guitar soundscape over it. Playing in sync with the band is one thing, but playing in sync with what you hear through headphones is a mystic, fluid experience in itself. To play the track back and hear what you laid down and it be absolutely flawless and transcendent is a real blessing. There are some moments you can't capture in a professional studio.

Q. Which new bands do you recommend?
A.) As a very new band ourselves, we don't really know many bands newer than us. But Acid Baby Jesus are a newer band that we've all enjoyed and taken some cues from. Also, Tamaryn have been a real treat to both guitarists ears.

Q: Which band would you love to made a cover version of?
A.) We play plenty of covers live as we progress into writing more originals... these include Black Angel's "Bad Vibrations", Donovan's "Season of the Witch", and Bauhaus' "Bela Lugosi's Dead" among others. One cover we do that we actually plan to record is of The Telescope's "The Perfect Needle".

Q: What are your plans for the future?
A.) We're looking to release our first EP "Mesmerist's Mainline" by the spring of 2016, and then we'll be heading into professional studios to record our debut full-length. By Fall 2016 we plan to be touring dates around the U.S.