Honeysuckle with Bedroom Eyes - An Interview 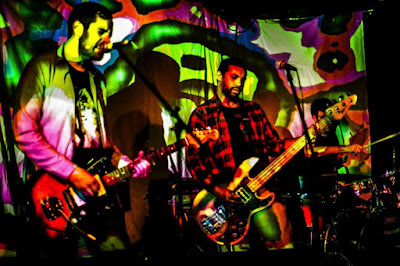 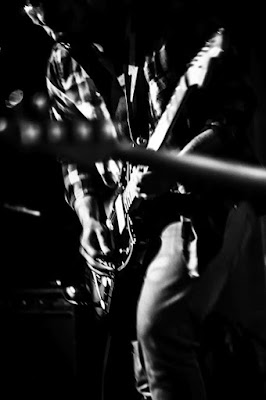 1. When did Bedroom Eyes start? Tell us about the history...
Bedroom Eyes started up sometime in 2011 with Rj, Adam, Rob and Mike. We had all been playing heavier music in different bands around New England, particularly southern New Hampshire and Boston. We knew each other from playing and going to shows in the area, some of us were longtime friends. Right around the time things with their band L'Antietam started to slow down, RJ and Adam were kicking around songs with a different sort of flavor and decided to make something of it. Early on they would alternate playing guitar and bass, and the first album was recorded like this. Due to an unfortunate hand injury, Mike had to leave the band and we tried to scrape by as a 3 piece for a while. It was during this time that we laid down some tracks for a record that was never finished. Later on, Danny joined on bass, and RJ and Adam took to guitar full time. That was sort of the "comeback." We finished writing the new album, recorded it, and started playing more shows around the area.

2. Who are your influences?
We dig all kinds of music. Between all of us there's love for everything from hip hop to metal, electronic to classical. I think we started the band wanting to make noisy rock music, not quite as chaotic as we had in other projects, but not quite pop either. There were some riffs early on that made us think of Sonic Youth, but we could never shake the sort of sad, moody vibe that crept into our music so songs always sounded different when we were done with them. Among some of our influences are Eric’s Trip, Malady, My Bloody Valentine, Polvo, Swervedriver, a lot of 90s rock really. It doesn’t end there but those are definitely the more obvious ones.

4. How do you feel playing live?
We’ve all been playing in bands since our early teens, playing live has always been part of it, and it is indeed a joyful experience. We’re always looking for ways to add to the live experience but appreciate the simplicity of a straightforward set with no frills.

5. How do you describe Bedroom Eyes sounds?
We don't have anything like a mission statement for how we want to sound, so I often have a hard time trying to find words to describe how we come across. We tend to aim for darker moods and noisier sounds, and like to leave the vocals obscured and atmospheric. Shoegaze is a decent starting point, but we try and change things up and keep it interesting a lot of the time, so I don't think we fit well with other bands that get that label.


6. Tell us about the process of recording the songs?
We recorded our two existing albums at different studios but we’ve always gone in knowing what we wanted. When we’re still in the writing process we regularly do home recordings so we can all take time to reflect on what we’re working on and try new things. We also understand that everything is subject to change if it suits the song, so we'll often demo a song several times throughout the writing process until we've found a sweet spot. We booked significantly more recording time for Honeysuckle and as an outcome we spent more time fussing with the details, mixing, and tweaking the final takes. We wanted to take time to get the vocals done exactly right, so we laid down all the instrumentals in a weekend session and mixed it in another session about a month later, and in between RJ recorded vocals in his bedroom at his leisure, and we added some other sounds. This approach was really great because it reduced overall time in the studio and made the time we spent there much less stressful.

7. Which new bands do you recommend?
We have pretty varied musical tastes between us, but we all really enjoy the new Infinity Girl record Harm. It's a very interesting approach and a very precise execution of their often chaotic sound. It has the romantic nervousness and slacker grooviness you'd want from a great pop record, but gives it to you in a completely fresh way. Other than that, here's some personal rec's from each member:

Adam: Viet Cong - Self Titled (2015) I was a huge fan of the band Women and when some of those dudes started a new band I knew it would be tight. This shit has a bit of a post punk vibe but maintains Womens' noisy, brittle guitar sound and angular sections.

Ghostface Killah with BADBADNOTGOOD - Sour Soul (2015) Not that this is a newer artist but his collab with badbad is like when a friend gets a really different hair cut and it looks dope as fuck, you're like shit your hair should've always been this way!

Rob: Shapednoise - Lightness (2015) This guy's a fantastic electronic noise artist however I am more interested lately with his techno/house tracks such as this which you'd likely find on vinyl. Extra hard-hitting and creative.

Danny: Paranoid - Satyagraha (2015) I just can't seem to get enough noisy d-beat hardcore lately, and this record really blew my mind with how they've incorporated metal/thrash into the mix. The split LP with Absolut is also a total ripper!

8. Which bands would you love to make a cover version of?
Boston has a rich tradition of putting together whole shows of tribute bands for Halloween, but we haven't had the chance to take part yet. We talked about doing Smashing Pumpkins this year but we didn't have time. Danny and Adam played in a Hives cover set a few years back which was a ton of fun. In the past we covered "Tractor Rape Chain" by Guided by Voices, and we’ve talked about covering a Grouper song cause it would be really cool to turn a soft acoustic tune into a banger.

9. What are the plans for the future?
We’re constantly writing, and already have several songs fully written. We're getting much more into the groove of collaborating, and ideas are originating from all corners. For instance a few of our new songs started as ideas from Danny. We'll be focusing on tightening those up and fleshing out a few old ideas, and with a few songs from the scrapped session we'd like to revisit, we are already pretty far along with writing the next album. But we'd like to go even further with recording experimentation next time, so it may be a while before it's ready to see the light of day!