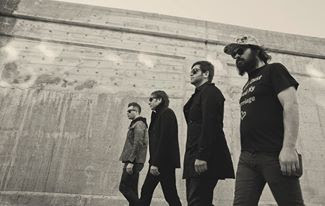 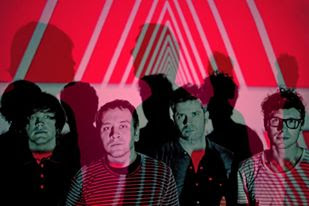 Q. When did Pink Frost start? Tell us about the history...
Pink Frost started off as a few friends getting together and writing songs and a kind of side project to APTEKA. After the tragic loss of Mark Frost in 2011 and some weird legal issues surrounding the name “APTEKA” it made sense to fuse the two bands together into one unit.

Q: Who are your influences?
Our influences are always growing and rearranging themselves from Nuggets-era garage jams to Sabbath inspired doom to the sharp angles of post-punk or even a tripped out ballad like Jefferson Airplane’s “Today.” Anything we come across can be influential. It’s not really a specific band or style, but more a feeling we are trying to capture at any given moment

Q. Make a list of 5 albums of all time…
It’s always changing but at the moment

Q. How do you feel playing live?
Playing live is the purest expression of what we do. A very loud expression.

Q. How do you describe Pink Frost sounds?
A cathartic expression of artistic deviants who still believe in beauty in shithole Earth.

Q: Tell us about the process of recording the songs?
That’s evolved over time. We used to record everything at our noisy practice space, and there were some definite positives to working that way. We could spend hours and sometimes weeks obsessing over certain sounds or textures and in those early recordings you can really sense the obsession, but we were always encountering pretty serious limitations. Both in terms of sonic fidelity and capturing the performance. We didn’t have enough gear to record the band live as a full unit, so it was more of a record the drums and then lay tracks over the top until things seemed finished. So we were always missing that spark of a live performance. The last few recordings have been recorded by Gregoire Yeche at Electrical Audio which has been really liberating and has allowed us to explore the performance as art form and get into some serious sounds.

Q. Which new bands do you recommend?
Touched By Ghoul, Metz, Lasers and Fast and Shit,

Q: What are the plans for the future?
We’re currently working on a new LP for 2016 that we’re really excited about. Feels like a complete expression of what we’re capable of doing in this current formation. Beyond that all I can say is things will change in deeper directions.

Q: Any parting words?
Really love your blog and wanted to thank you for helping keep music evil!
*
*
*
Thanks