Sad is Fine with dot Vom - An Interview 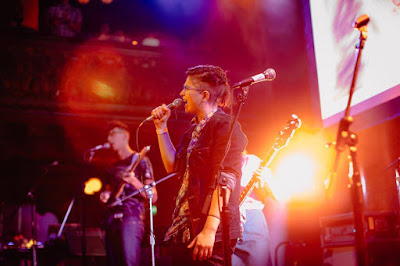 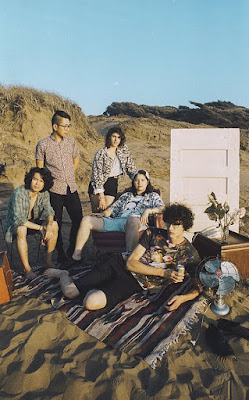 Q. When did dot Vom start? Tell us about the history...
As I started typing out my answers I realized the names would get confusing, so here's a quick rundown of our members:
Dany - lead vocals, songwriting, synthesizer, answering these questions
Austin - rhythm guitar
Leslie - lead guitar
Kati - bass
James - drums

The band started in around 2013, and the history of the current set of people (our lineup has changed a little bit over the years) is very typical for a band in the San Francisco scene. The city's scene, especially around SF State, has a really homey, incestuous feel to it---everyone's been in a band with everyone, everyone's dated everyone's ex-boyfriend, you get the idea. So Austin and I started dating through a mutual friend and started the band, and the members we have now joined through random happenstance. I met Kati working backstage at a music festival. Leslie met us at a tiki bar near my old house, through our previous guitarist Jonathan. James, our drummer, is the most recent addition to the band, and we'd never heard of him, yet he was friends with our previous drummer Fil, occasionally played in a band with Austin's old high school classmates, AND grew up with Jonathan in his hometown, so, go figure. Small world, small scene. Sorry for all the names!

Q: Who are your influences?
We have a ton, because between the five of us we like a bunch of eclectic music, but the top three genres that we draw from are probably 50s/60s doo-wop pop (Gene Pitney, Ben E. King, The Shirelles, Dion Dimucci), shoegaze (Slowdive, My Bloody Valentine, Starflyer 59) and modern dream pop (Candy Claws, Youth Lagoon, Beach House). Q. Make a list of 5 albums of all time… Since there's five of us we'll all pick one! Dany: Candy Claws - Ceres and Calypso In the Deep Time Austin: Radiohead - Kid A Kati: King Gizzard and the Lizard Wizard - I'm In Your Mind Fuzz Leslie: Chon - Newborn Sun James: Wu-Tang Clan - Enter the Wu-Tang

Q. How do you feel playing live?
It's the best part and the weirdest part. It's like a teenage makeout---exciting, but also awkward and kind of gross.

Q. How do you describe dot Vom sounds?
Our music tries to walk the line between cute and sad, and between rock and pop. It's dreamy, but still grounded. We try not to be deep or pretentious---it's very personal music, and so it describes the mundane problems that we go through as lower-middle-class socially-stunted twenty-somethings in the city. "First world problems" like heartbreak and depression and existential crisis, you know?


Q: Tell us about the process of recording the songs ?
We've only just started getting our stuff professionally recorded--before the split we released, we just did demos at home with an audio interface, some SM-57s, and Ableton Live. Our recent split, though, we recorded with Scott McDowell at Hyde Street Studios, and he is a phenomenal producer. As much as we'd love to record all the instruments at once, for a more natural feel, we weren't quite ready for that when the opportunity rolled around, so we did it to a click track---drums first, then guitars and keyboard, then vocals.

Q. Which new bands do you recommend?
We have a bunch of talented friends we want to shout-out! Some of them are: Bobey - intricate, beautiful loop-based math folk Summer Peaks - pop perfection with great songwriting and catchy melodies Talk of Shamans - dancey math rock, both technically complex and plain old fun to groove to

Q: Which band would you love to made a cover version of?
We cover Weezer all the time as a joke, but if I wanted to do a serious cover, it'd probably be of Blondie's "Heart of Glass" or The Talking Heads' "Psycho Killer." We have a soft spot for the 80s.

Q: What are your lans for the future?
We've been playing a few shows in the area, and it's exhausting, so we're finally taking a hiatus to work on a full-length album which we hope to release at some point next year (maybe in the summer?) and go on a West Coast tour.

Q: Any parting words?
It feels good to feel bad sometimes.
*
*
*
Thanks