Luminol Dancing with Le 1991 - An Interview 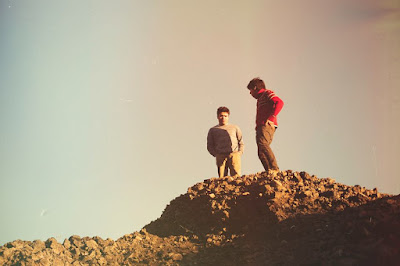 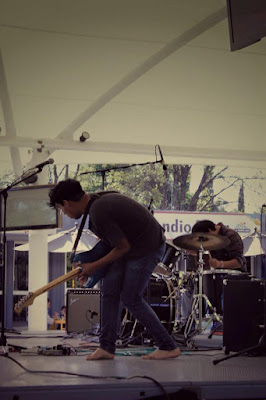 Q. Tell us about the history...
We met back in 2006 or so at high school. We were not friends back then, but we were the only two guys in class that played an instrument. We went to different high schools after that and lost contact, but two years later we found each other again, became good friends, and started a band of five people. It was so hard to get a place in the scene back then, we were too young, like 16 or 17 years old and, even though it was something really exciting, we had a lot of problems with the band members and we felt really drowned. After two years the band dissolved and Moncho and I started to jam at his parents place. Little by little we developed this concept, some people think we came out of nowhere, or that we were hidden in a room like monks, but the truth is that we’ve been playing a lot around our city for a while, but since we didn’t have any solid material recorded we’ve been unnoticed until now. We didn’t recorded any serious thing because we were busy with other thigs, but I think now is the right time. We know each other very well and we know our musical pulse. We’ve been playing/jamming/recording for almost 8 years together although we have been doing different things with different people: I play bass in Bleak Boys, and Moncho played the drums for Car Crash Sisters for a while, but that never stopped us to make music (or other projects) together. This music, these songs are the product of patience, friendship and an extreme passion for music and creation.

Q: Who are your influences?
Moncho has a lot of new punk influence; he’s the drummer, so he loves noisy loud things like METZ or speedy rhythms like Wavves and Cloud Nothings. He’s always looking for clean, direct sounds of drums in the records, like those in Interpol, Silversun Pickups or The Jesus Lizard. As for me, I have a more melodic sense; I enjoy the vocal harmonies of the seventies British or American pop music, dreamy sounds like Beach House or Slowdive, the pretty dissonances of guitar players like Lee Ranaldo, and the rawness of bands like The Jesus And Mary Chain or any goth band from that time. Also I’m a huge fan of 80’s music, weather is synthpop, new wave, new romantics, whatever, I’m down for that.

Q. Make a list of 5 albums of all time
Ok, since we are two I’ll include both lists

Q. How do you feel playing live?
We love it, we just go away. It’s like a different kind of connection. We feel a kind of cosmic chemistry between us and the crowd.

Q. How do you describe LE 1991 sounds?
I might sound rude, but lately the bands seem to ignore the responsibilities of the drums in the song. They just play a single rhythm, go through it all over the tune, and slow down the volume until it sounds like a drum machine. That’s something we don’t like about a lot of new shoegaze bands. We try to develop the rhythm in a way that it can touch the listeners: You can feel a real drummer when he plays, that’s what we try to do. As for the strings, I’m not the kind of guitar player that goes through Am, Em, G, C all the time and adds a lot of overdrive or effects to dress it fancy; I think that’s too obvious. I’m always looking for warm, weird sounds in chords or melodies that I cover up with a soft chorus or other modulation pedal. I tend to use delay to expand the frequencies, and sometimes an overdrive is necessary.


Q: Tell us about the process of recording the songs?
We know each other so well, so we connect instantly. We have made a routine; we are organized in the composition process. When we make new songs it’s because we have a common idea: usually we jam through a phrase or a rhythm and record it more than one time. We build a structure for the song. When you jam to make a song it’s common that you follow a pulse, and you may follow the same pulse every time you jam. So it is important to step aside of the song after we record it, and think about it in a more mathematical way. We study the structure and try to find other ways to build it, we try other tonal possibilities, and work patiently with the melodies until we feel it’s done. When we recorded our last EP, we were looking for a more direct sound, so for the guitar we used several mics in a room and a signal divided in stereo, just the way we play in a live performance.

Q. Which new bands do you recommend?
We love Fidlar, Torres, METZ, Girl Band, Drenge; in a more underground place there’s bands like Crisis Arm, Airs, Ummagma (Man, those guys are so space-special), Jaguwar –not so new, but always cool-; In Mexico there’s tons of bands, Birdhaus (You need to check this audiovisual project), Moon Moon, Vaya Futuro, and -of course- Teorema, Bleak Boys and Car Crash Sisters.

Q: Which band would you love to make a cover version of?
Fleetwood Mac, ABBA, Bee Gees.

Q: What are your plans for the future?
We need to play shows asap! We would love to make a tour to North America soon and we’l see what happens next.

Q: Any parting words
Listen to the bands from your city.
*
*
*
Thanks