Perception with The Sonic Dawn - An Interview 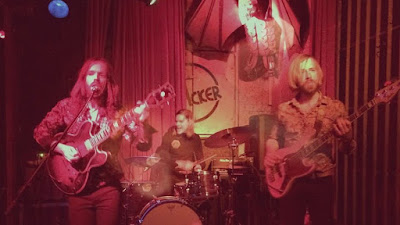 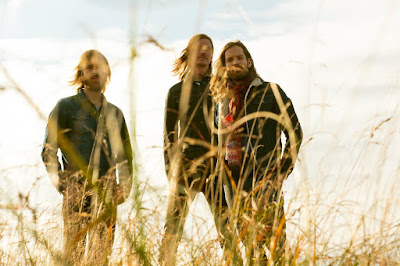 Q. When did The Sonic Dawn start? Tell us about the history...
The three of us have known each other since we were teenagers. We used to record these tapes to each other with the best jams we knew and trade them in school. Like “Check out Focus, they’re SICK!”

We’ve always played music together. The Sonic Dawn first saw the light of day as ‘The Mind Flowers’. We played our first show in January 2014 and quickly got a record deal for a 7-inch single on Levitation Records. From then on things have been moving fast! We have played a lot of shows across Europe and working on building our own sound. We signed with the Berlin based audiophile label Nasoni Records for our debut album, Perception, which just came out world-wide (LP/CD).

The name was changed because we would otherwise risk a law suit from Ultimate Spinach’s former producer, upon release of Perception in the U.S. It turns out he owns the trademark “Mind Flowers” in the states, which we obviously had no idea about. It feels good to be The Sonic Dawn though, so we’re not sorry.

Q: Who are your influences?
There are so many! We strive to sound just like ourselves – an original sound, not a revival of anything – but it’s easy to tell that we’re really into music from the late 60s and early 70s. Mainly American West Coast groups from the first acid wave, and classics like 13th Floor Elevators, Hendrix, The Doors etc.

But we’re into all sorts of stuff, really. Jazz, afrobeat, soul, folk, avantgarde… So much amazing music out there. What matters is that people write about something relevant. You need to really WANT to play, for the music to be any good. A lot of the music people hear on the radio etc. is only made with the purpose of making money.

Q. Make a list of 5 albums of all time…
Tough one, but here are five killer albums that never seem to fade. They are as relevant today and sound just as refreshing, as when they were made. In random order:

13th Floor Elevators - Bull of the Woods
Their least acclaimed album, which was mostly done by guitarist Stacy Sutherland, as the group was disbanding into chaos. Crazy intense vibe and some of the most amazing guitar ever. Genuinely original songs and sound.

The Jimi Hendrix Experience - Electric Ladyland
It’s hard to pick a favorite among Hendrix’ albums, but this one is perhaps the most psychedelic? This is a very conceptual side of Hendrix’ songwriting and everybody plays like there’s no tomorrow. That kazoo in the opening track… Impossible to fuck with!

Hansson & Karlsson - Man at the Moon
An instrumental concept album about the moon landing, by the Swedish progressive/fusion duo Hansson & Karlsson. Funny how well they set the scene. This is mostly just them jamming out, but the music is so picturesque. Space exploration for organ and drums.

The West Coast Pop Art Experimental Band - A Child’s Guide to Good and Evil (Vol. 3)
One of our all time favorite bands. As an album this record is probably their best. Everything adds up, so it’s not just a bunch of good songs, but a larger whole. Quite psychedelic, but extremely smooth sounding. Very intriguing and quite provocative at times.

The Doors - s/t
Probably one of the best debut albums ever made. It’s hard to grasp that ‘Break on Through’, an all time classic, is the first song on the first album. They nail it from the first seconds, you just surrender and let them say it like it is. Makes you want to go to “the other side”. Imagine these guys were in their early twenties at the time. Mind-blowing.

Q. How do you feel playing live?
It’s what we do! We're really a live band at heart, we live and breath for playing live concerts. We work hard to give people something different. We put great effort into our live sound and don’t cut any corners out of convenience, like only bringing a digital echo effect when a real tape-delay echo machine obviously sounds so much better, for instance. Mostly of course, the experience of the show is about the energy and intention that you put into it, and we try to play each show like it’s our last. People seem to really appreciate that, which is great.

Q. How do you describe The Sonic Dawn’s sound?
Our sound is often compared to the sound of some of the rock groups from 1968-69. But there are notable differences as well, elements that we like to think are our own contribution, like the atmospheric vibe on our album single ‘Watching Dust Fall’ (with Erik ‘Errka’ Petersson on keys).

Our music is conceptual, complex and inviting. We try to build a sonic universe where there's room for thought and strange adventures. Music for reflection, you could say.


Q: Tell us about the process of recording the songs?
We recorded ‘Perception’ in an old farm house in the countryside here in Denmark. It was a quite interesting experience to disconnect from your daily lives completely, to focus on just making this record. There was a special kind of lonely vibe out there and the isolation turned out to be quite productive. We would record all day and sometimes all night as well, for the two weeks we were there.

We did the recordings ourselves, so we had the time and opportunity to experiment a lot, which is one of the reasons why the album doesn’t sound like most other new records out there.

Later we worked Peter Brander, a producer who has produced some of the most famous Danish rock/pop artists (Sort Sol, Michael Falch etc.) on mixing and mastering the album.

Q. Which new bands do you recommended
Dean Allen Foyd from Stockholm, Sweden. They are one of the best and most original current bands we know in the whole world. Hands down. We owe a lot to these amazing guys, whom we first met coincidentally at a show in Berlin in 2012. They blew our minds that night.

The Wands from Copenhagen, Denmark. Check out their debut album, it’s a pretty sweet mix between neo-psychedelia, catchy riffs and more conceptual stuff, like the final track on there. Hilarious guys too.

Magic Jove, another Swedish band, from Malmö. They sound like a young, Swedish version of Blue Cheer. A classic psychedelic blues trio with some great songs. They have a cool 10-inch EP out.

Q: Which bands would you love to make a cover version of?
We actually don’t do covers. In our opinion it can be difficult to mix cover songs with your own stuff, because it can pull the audience right out of the universe you’re trying to create with your own original songs.

If we decide to do a cover version anyway some day, it might be of ‘I’m Not Like Everybody Else’ by Ray Davies (The Kinks). It seems every good 60s group did a cover of this killer song at one point. It could be fun.

Q: What are the plans for the future?
We are starting our album tour in December 2015, where we will play a string of shows around Europe. Germany, France, Switzerland, Austria… The list continues and we hope to expand beyond Europe one day. We're sending quite a lot of records overseas so there seems to be an interest.

And we're working on the next album. We've just been away in complete isolation of a month to write and record, but that's a whole different story.

Q: Any parting words?
Make love, smoke weed, listen to music. Be nice to each other!