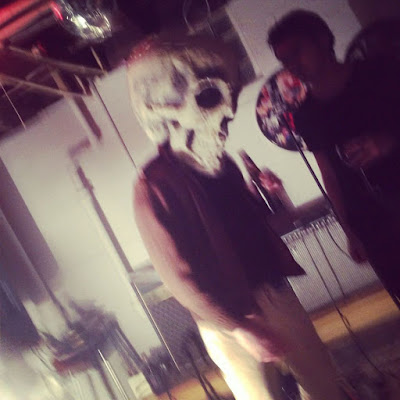 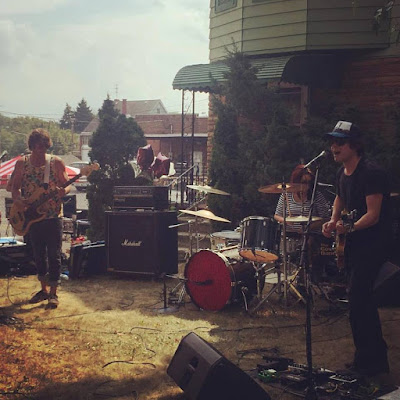 Q. When did Birthday Noose start? Tell us about the history...
Birthday Noose began as an acoustic two piece about two years ago. My buddy Alex Nikitin had hundreds of great acoustic songs that he wanted to start playing out live, so we starting playing together. Jamming ensued and our sounds became fuzzier and louder. We added Chrissy Spangler on drums about a year into the band which resulted in the psychedelic sounds of Birthday Noose that we play today. Eventually Alex left the band and Chrissy and I began writing the songs. Around a year ago we took on local legend Erik Blankenhorn and the holy trinity of Birthday Noose was formed.

Q: Who are your influences?
I have so many influences, mostly in the psychedelic realm. As far as guitar inspiration I’m a big fan of Kevin Sheilds from My Bloody Valentine, Oliver Ackerman from A Place to Bury Strangers and John Dwyer from Thee Oh Sees. Some of my favorite bands are Spacemen 3, The Thirteenth Floor Elevators, The Cramps, The Stooges and The Velvet Underground.

Chrissy: Kevin and I have some overlap in our influences, but some of my favorite Birthday Noose jams come out of the collision of our differences. I definitely have my roots in the classic rock and earlier heavy metal (Van Halen, Metallica, Black Sabbath, Judas Priest, MC5) and I am always looking for that attitude in new music and performance. Bands blowing my speakers up lately: Bass Drum of Death, Fidlar, Thee Oh Sees, and Death From Above 1979.

Q. How do you feel playing live?
Awesome! We are definitely more of a live band. I do a lot feedback and guitar effects work that you can’t hear on the recordings and we’re constantly trying out new songs live. We try to play out as much as our work lives allow.


Q: Tell us about the process of recording the songs?
We recorded and mixed all of our EP ‘Hang Em’ High’ ourselves in my basement. We recorded the songs live and then added more layers of guitar and vocals. We didn’t have a bass player at the time of this recording so I played simple bass on top too. I definitely went for the simplest recording process and tried to capture as much of the live sound as possible.

Chrissy: Just going for that base track and adding layers was the quickest way to capture the real attitude of our sound, because we play off of each other – that’s how the songs were made, that’s how they are performed, so why not record them that way? I remember getting the base track down for “Keep Tripping” and then realizing the mic didn’t really pick up the cymbals, and I missed a hit or two. So rather than scrapping the track, we made an entire layer that was just me standing next to a cymbal that we re-mic’d and laying into it about 10 times. It was hilarious! I especially remember finally getting “The Cure Song” down. We would get halfway through and one of us would barely mess up, but we knew the take was ruined and would stop, shout some profanities and start over. We did that about 10 times, until the frustration built up and when we finally said, “fuck it! This is the LAST time we are playing this DAMN song!” and we got the take. Once you stop trying to play the song, that’s when you actually play it, and that is how we captured this EP.

Q. Which new bands do you recommend?
I’m not on the cutting edge of new music, but a few newer bands I really like are Meatbodies, Fuzz and Jesus Sons. There are some great Ohio bands that we are fans of such as Me Time and The Raging Crush, Broken Mugs, Weird Science and Ultrasphinx.

Q: Which band would you love to make a cover version of?
We’ve done a bunch of covers by bands like The Stooges, Spacemen 3, The Gories and The Velvet Underground. Now that we have so many songs we don’t have much room in our sets for covers- but I’ve wanted to cover The Cramps, The 13th Floor Elevators and The Troggs for a while.

Chrissy: I’ve always wanted to pull off MC5’s “Kick out the jams” and melt some faces.

Q: What are your plans for the future?
This winter we are going to be recording a lot. We have about two albums worth of material we really need to get out. We definitely want to get our debut album out by spring. In the meantime we’ll continue to write new songs and play out.

Q: Any parting words?
Don’t eat stuff off the sidewalk. And check out our other band Me Time and The Raging Crush! Also, check out Akron bands because we’re all the best.

Chrissy: Let the dinosaur’s die! We want new rock and roll on the radio!
Thanks for the interview!
*
*
*
Thanks