Land with Novella - An Interview 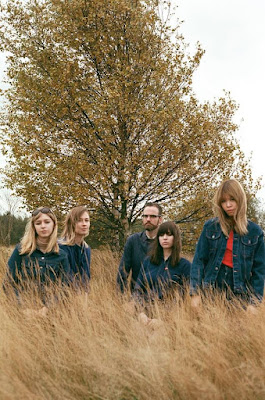 Q. When did Novella start? tell us about the history...
Q1- Novella started in 2010 when Hollie, Suki and Sophy met through mutual friends, I (Iain)joined as drummer in 2011 and Issie joined on keys and synths in 2014 shortly after our debut album was recorded.

Q: Who are your influences?
Q2 Influences include 60's psych, Velvet Underground, Led Zeppelin, Can, Neu, Sonic Youth, Stereolab and Broadcast amongst others.

Q. How do you feel playing live?
Q4 Depends on the gig, it can be hard work or fun, terrifying or exhilarating. It's quite rare that we all have the same experience at any given show, what was great for one of us could be bad for another. Playing live is definitely addictive, though.


Q. How do you describe Novella sounds?
Q5- It's pretty difficult to describe your own sound, we've been referred to as Shoegaze, Neo-psychedelic, Kraut-tinged Dreampop, added together there's probably truth in those descriptions.

Q: Tell us about the process of recording the songs ?
Q6- We have to work on the cheap and thus quickly, so we record the basic track all together as a band, use the best take then overdub other instruments, if necessary, and vocals. The method has it's pro's and con's but for a band like us, it gives a pretty honest feel.

Q. Which new bands do you recommend?
Q7- Really been enjoying Deradoorian recently and we toured with Cheatahs who are also ace as are Hookworms.

Q: Which band would you love to made a cover version of?
Q8- We played a cover of Coming Down by The United States of America in our live set for a couple of shows, that was fun.

Q: What are your plans for the future?
Q9 We have a 3 week tour of Europe coming up in February, then, hopefully festivals, etc through the summer. At some point we are aiming to cross the Atlantic to play shows. We are also working on new material for the 2nd album.