Music For Movies Unmade with Vivid Low Sky - An Interview 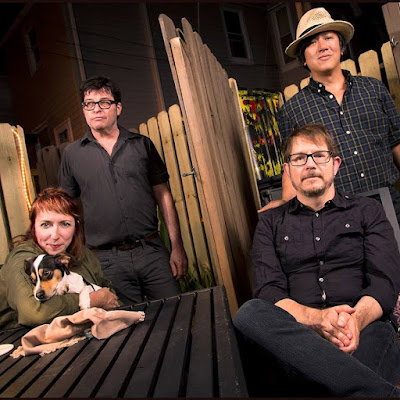 Q. When did Vivid Low Sky start? tell us about the history...
I first started the band in Baltimore as a side project for music that didn’t work with the band I was playing with in 1997. Eventually, I had written enough material to record a full-length record. I called some of my favorite musicians in the area to help me make the record a reality. These musicians were Miyuki Furtado on drums, Shirlé Hale on bass / keys, Thomas Moore on guitar and J. Robbins on guitar. The result was a record called ‘Music for Movies Unmade’ which didn’t get released until 2000 on Plastique. By this time, I had relocated to North Carolina with Shirlé, Miyuki had moved to Brooklyn and formed The Rogers Sisters, and Thomas had moved to Morgantown, WV, so the band went into hiatus after only playing 3 shows. In 2012, Shirlé & I moved back to Baltimore after playing in Free Electric State while in North Carolina. I had also written another Vivid Low Sky record over the years. In April 2015, we decided to record our follow-up record, ‘II’ , this time with J. Robbins producing and play a bit of guitar on a couple tracks as well. Miyuki came down from New York and Thomas came in from West Virginia and we practiced for 6 hours and went into the studio the next day. The result will be released on March 11, 2016 on LP/digital in the States via Slimstyle Records and on cassette via Friends Records.


Q: Who are your influences?
Probably the biggest influence for me as a musician would be post-punk bands of the late ‘70s/early ‘80s, such as Echo & the Bunnymen, The Cure, Joy Division, and followed by the early records of Brian Eno. With that said, I am also a huge fan of ’50s/’60s be-bop jazz and also Krautrock bands like CAN, Neu!, & Faust.

Q. Make a list of 5 albums of all time…
This list is something that will forever change for me depending on my mood, but at the moment off the top of my head.
1. Brian Eno - Another Green World
2. The Cure - Faith
3. Neu! - Neu!
4. John Coltrane - Olé Coltrane
5. Sonic Youth - Sister

Q. How do you feel playing live?
We really enjoy playing live, it adds another dimension to the music because some of the material is improvised and left to chance, so it changes every night and makes for a one of a kind experience.


Q: Tell us about the process of recording the songs ?
We practiced for 6 hours the night before we entered the studio with J. Robbins, who was in Jawbox. We cut the basic tracks for the whole record in one day, most in one or two takes and the following day we spent cleaning up tracks and overdubbing. Miyuki went back to New York and Thomas back to Morgantown. The following week J, Shirlé and I spent adding additional guitars, Hammond organ and such and then J and I mixed it. It was a pretty quick process in all.

Q. Which new bands do you recommended?
I’m an avid music fan, so I’m constantly looking for new bands. Some of my current favorites are Viet Cong, Girl Band, Föllakzoid, Metz, Savages, and Total Control.

Q: Which band would you love to made a cover version of?
We’ve been talking about doing a cover of a Link Wray & his Ray Men song called “Rumble” which came out in 1958.

Q: What are your plans for the future?
Our record drops in March of 2016, so we plan on doing some touring of the East Coast in April and the West Coast in the Summer. We would love to play anywhere that would have us, so if Brazil wants to bring us down let us know…haha.

Q: Any parting words?
Thanks for supporting independent bands like Vivid Low Sky and giving us exposure. It’s people like you that make us want to keep making our art. Cheers!
*
*
*
Thanks