Wash Away with Teen Brains - An Interview 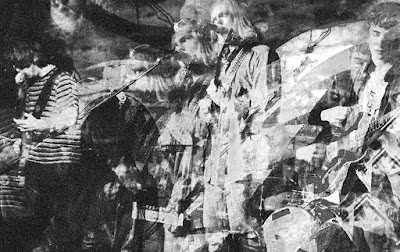 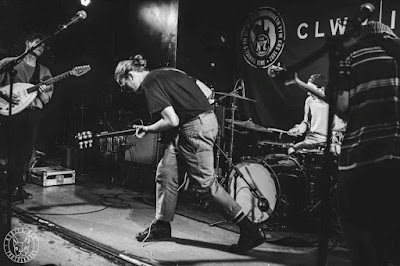 Q. When did Teen Brains start? Tell us about the history...
Teen Brains started in 2014 as a side-project from another band me and Tyler were in. It was originally just us two, we never really had any intentions of taking things seriously we just wanted to record some fuzzy/surfy tracks every now and then, stick them online and leave it at that. So one night we wrote and recorded our first single 'Annabel' in Tyler's bedroom, we stuck that online and got a really cool response. Harry from Beech Coma Records got in contact shortly after asking if we wanted to contribute a song to this cassette compilation he was putting together so over a couple of days we recorded our second single 'Flume' and from there we started to take it more seriously I guess. We started working on our self-titled EP right away and during that writing/recording process we decided to flesh out into a full band and start playing shows. Now Teen Brains is me (guitar), Tyler (guitar and vocals), Harley (bass) and Chob (drums)

Q: Who are your influences?
We're definitely influenced by that early wave of shoegaze/psych bands like The Jesus & Mary Chain, The Brian Jonestown Massacre, Ride, A Storm In Heaven-era The Verve, My Bloody Valentine etc etc. There's probably some influence from newer bands like A Place To Bury Strangers, DIIV, Splashh, Toy and that sort of stuff too. We never were like 'right lets make a record that sounds like X band and Y band' that's just the stuff we were listening to a lot when writing so the influence sort of came through naturally I guess.

Q. Make a list of 5 albuns of all time…
(sorry I really can't answer this one, way too difficult, my answer probably changes everyday haha)

Q. How do you feel playing live?
We love it! Me and Tyler write and record pretty much all the tracks in his bedroom and before we both moved to London we used to practice in my shed so it was always really cool getting to hear the tracks 'properly', through a decent sound system and with a technician there to make us sound better than we actually are haha. And obviously it's always so cool watching people get into our set and have a good time when watching us. That being said though we're always slightly nervous when we play, not nervous about actually playing, more because we're just genuinely cursed.. we have the worst luck when we play live, things are always dying on us - pedals, guitars, amps, we seem to break literally everything. My Big Muff and Cathedral both died on me during one set which, being in a shoegaze band, was a total disaster. So there's always that fear in the back of my mind like 'what's going to break this time??' bit other than that playing shows is great.


Q. How do you describe Teen Brains sounds?
Psych-pop I guess? I always find it pretty difficult to answer this because our sound generally varies from track to track but I guess it's somewhere between shoegaze/psych and surfy guitar-pop, that's what other people usually go for anyway

Q: Tell us about the process of recording the songs ?
We usually write and record our songs at the same time, we've always done things pretty DIY because we like to have total control and freedom to experiment, also Tyler studies music production at university so we never felt the need to fork out on going into a proper studio. But yeah usually we'll spend a day or two locked in his bedroom writing and recording as we go. Typically we'll turn up with a bunch of riffs and ideas that we'll flesh out into a full track and build on within the recording software. We like doing it this way because it allows us to sort of build on the track as we go, trying different things that we wouldn't usually think to try. It's never really a case of writing a song in a practice room then going into the studio and recording it. Our new EP is so much more experimental than our previous stuff and has a much bigger sound because of this, it's a lot more noisy than our previous releases because we tried a bunch of new techniques and experimented with samples and other stuff. It's a blessing and a curse though because as I said there's a lot more freedom to try new things when self-recording the tracks but it can be a curse because it'll end up taking us ages and ages to record things because we'll constantly be changing or adding bits and we always end up scrapping versions of tracks and re-recording them until we're totally happy with them. That's why our self-titled took so long to get out, there must have been like three/four different versions of that EP before the final one.

Q. Which new bands do you recommend?
There's too many to name! Our hometown Norwich is killing it at the minute, our good mates Claws do really good surfy garage-pop, there's a new Riot Grrl band called Peach Club they're crazy good, Dazy Crown are great too if sun-soaked guitar-pop is your bag. New Horror are unreal too, they're a northern band who do stupidly good lo-fi post-punk/shoegaze sort of stuff. I work at Fuzz Club Records and we're putting out an EP from this new Italian band called My Invisible Friend who are just ridiculous, they do a really dark, mind-blowing mix of shoegaze and kraut, definitely worth checking out. I've been listening to a lot of Witching Waves, Magic Potion, Dream Wife and Chain of Flowers too, they're all wicked. Too many good bands to mention !!

Q: Which band would you love to made a cover version of?
Erm I'm not really sure, we've joked a few times about covering 'Message In A Bottle' by The Police, I'm not really sure why but I guess we always thought that would be pretty cool. Maybe a track by The Cure, there's been a couple tomes where we've thought about covering Lullaby or Just Like Heaven but we don't really do covers.

Q: What are your plans for the future?
We've got a new EP coming out in September called 'Translucent' that we're really stoked about, I feel like all bands say this but it's so much better than our older stuff. We took a little hiatus from playing shows to finish recording the new tracks and because we were all super busy with various other things, but when the new EP comes out we're going to get back into playing a bunch of shows. We were talking about doing a UK tour later in the year and maybe an EU tour in 2017 but that's just talk at the minute.

Q: Any parting words?
Our new EP is going to be released in the UK via Witchgirl Recordings, which is a new independent label I'm starting up so follow us on Facebook if you want to be kept in the loop with the new EP, we'll have some news on that very soon (Facebook.com/witchgirlrecordings)
*
*
*
Thanks