Drawn Out Days with Black Nite Crash - An Interview 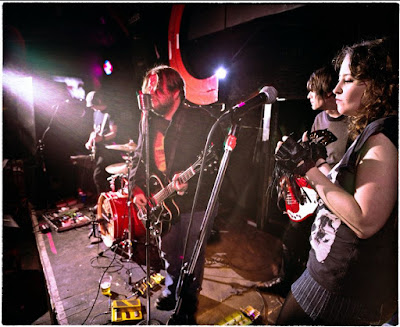 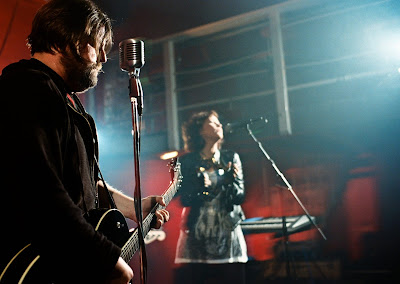 Q. When did Black Nite Crash start? Tell us about the history...
The short version: Seattle-based, established 2002. Since then 23 different band members in 24 different line ups all making roughly the same brand of fuzzy pop. Two albums, a couple of EPs (one split with Sky Parade), a split seven inch (with The Tamborines) with much more music coming soon.

The slightly less short version: The band originally came together as a four piece (Me-Jim Biggs-on guitar/Don Brewer on bass/Jen Hill on keys/Marcel Feldmar on drums) back in 2002 after running ads in the local alternative weekly. I had just come out of a frustrating series of collaborations that started as a milquetoast-y Radiohead/Brit Poppy hybrid band and morphed into something else over the course of a couple of years with several personnel changes and the de rigueur band drama that comes with them. After that reached its acrimonious end, I was thinking about giving up music entirely, but was inspired to give it all another shot by a chance interview I assisted on with Steve Kilbey of the Church for an old e-zine and my attendance at a Black Rebel Motorcycle Club show that happened the same week. I decided I loved music too much to quit, but decided I was going to do something simple, straightforward and fun, inspired by the stuff that I truly loved (The Stooges, The Jesus and Mary Chain, Primal Scream, etc.) instead of more indie flavor-of-the-month claptrap constructed out of jazz chords and perpetual misery. Within a few months I had a semi-stable lineup and we were on our way!

We played our first shows in December of 2002, they were the first Shoegazer’s Balls put on by Reverb Records at the Crocodile Café in Seattle and the Fez Ballroom in Portland. They consisted of a bunch of bands from Portland and Seattle doing short four song sets including three shoegaze covers and one original. We did Adorable’s “Homeboy,” Spacemen 3’s “Take Me to the Other Side” and My Bloody Valentine’s “Slow” along with our own Jesus and Mary Chain indebted original, “See Her Tonight.” By February of 2003 we had added a second guitar player (Joel Bergstrom, now of the excellent Vibragun) and started playing the local Seattle circuit fairly regularly. We got some good shows, got some notice in the local papers, got some radio play, cut an EP (that didn’t really work out) and made some personnel changes (replacing our keyboard player first, then our bassist, then getting rid of keyboards altogether). Within a year we (Joel, Marcel, and I with our new bassist Larry Brady) went to work on our first album. We ended up working with Erik Blood (producer for Shabazz Palaces and a stellar artist in his own right) initially and then Dave Hillis (engineer for Afghan Whigs, Pearl Jam and others, formerly of Thee Heavenly Music Association) getting about a dozen tracks down… and then it all kind of fell apart. Our bassist quit, our drummer moved, and our other guitar player decided he needed a break. So we took a year plus hiatus during which the album hung in limbo. Somewhere during the time in between one of our songs made it on to Northern Star Records first Psychedelica compilation alongside the Brian Jonestown Massacre, Silver Apples, and the Black Angels, among others, which was no small victory for us.

Joel and I decided to regroup in 2006, found a new rhythm section (Randall Morgan on drums and Jaime Clapper on bass), added a keyboardist (Heather Taylor) and finished up that first album to take on the road after its release by Custom Made Records. After a few short tours and a couple of years with minimal lineup changes we started work on a second album with Matt Brown (Trespassers William), during which time it all sort of fell apart again. Jaime became Michael Tyler who became Jasun Hadaway on bass, Joel decided after we finished recording album number two that he needed to do his own thing (and started the aforementioned Vibragun) and Heather moved on to greener pastures. Scott Kennedy (who was playing in Erik Blood’s band and now plays with Kingdom of the Holy Sun, as well) stepped into the second guitar/co-writer role and Izzy Dickey jumped on as our keyboardist, adding additional vocals and percussion to the mix, which has led to our longest lived lineup to date, over 4 years together now.

Over the last 14 years we’ve shared stages with a pretty diverse group of talented folks (including Spectrum, Adam Franklin, Longwave, Art Brut, Black Ryder, Asteroid #4, Editors, Helio Sequence, LSD and the Search for God, Kid Congo Powers, Ringo Deathstarr, Singapore Sling, and The Telescopes as well as many, many others), placed music in films and video games, and generally had a good time creating our particular brand of melodious fuzz, which really has not changed much in spite of the varying personnel involved… We’re getting ready to release our third album later this year, with another one nearly done and production about to start on an EP as well. Hopefully it doesn’t all fall apart this time. 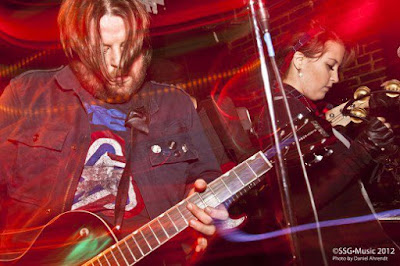 Q: Who are your influences?
Wveryone and everything. Our most obvious influences are the classic shoegazers and proto-shoegazers (Ride, My Bloody Valentine, The Jesus and Mary Chain, Spacemen 3) mixed with some post-punk (Joy Division, Echo and the Bunnymen) and some more classic stuff (The Stooges, Velvet Underground) . That being said, almost everything I hear, and certainly everything I love (which includes old punk and rap, as well as minimalists in the vein of Philip Glass and even top 40 radio hits) informs what I do. Everyone in the band brings their own vibe (and musical baggage), too. We all come from different places (none of us are actually from Seattle) and have fairly diverse backgrounds so there are a lot of different flavors cooked into our stew.

Just one example, the lead track on our second album (Drawn Out Days) is a song called “Baby It’s You.” The song “Girl” by Suicide is a fairly obvious antecedent; the bass lines are very similar. Originally, though, when I got the idea for the song I was standing in the shower thinking about the vague similarities between an old song by our friends Kinski called “Floundering and Fluctuating” and “Found Love” by Pete Bassman and Rosco’s post-Spacemen 3 project The Darkside (because that is the kind of thing I think about in the shower). I was sort of humming both of them back and forth to myself in the shower one morning and then somehow connected the style of verse chording to the pattern used in the chorus of “Don’t Ask Me Why” by Billy Joel, of all things. I got out of the shower and started to put a song together with a droning verse change based around that style. When I started to play a bass line that fit, the Suicide connection became apparent, but then when I worked up the chorus and bridge changes I actually started to get a House of Love vibe and kind of emulated Guy Chadwick a bit in the vocal. When I started to nail down the lyrics, I got to thinking about how the Pixies would do set lists in alphabetical order and thought about other times I’ve heard of bands turning songs into something like a game or an exercise, so for the rhyme scheme I decided to build each couplet around a different vowel sound: six couplets, six vowels (when you include ‘y’). So, very simple song with several different things feeding it from multiple directions…

Q. How do you feel playing live?
Best part of ‘the job.’

Q. How do you describe Black Nite Crash sounds?
Reverb drenched fuzzy noise pop with a heart that breaks anew every single day.


Q: Tell us about the process of recording the songs?
It is... Endless. Some are totally worked out and battle tested before we ever get to the studio, some are roughed out in the studio on the fly. After we get the rhythm tracks locked, we spend ages overdubbing and tweaking. It takes forever, mostly because we are perpetually broke and incapable of doing our own engineering. With an unlimited budget, I’d like to think we’d put out an album every 4 to 6 months… That being said, spending time in the studio is my second favorite part of the job.

Q. Which new bands do you recommend?
What is new? I discover stuff all the time; I’m always searching for good tunes. Sometimes I miss things for a few years before I hear about them. Over the last few years, the Cheatahs are probably favorite thing. There’s a bunch of newish (to me) stuff coming from Australia at the moment that I dig like City Calm Down, Morning Harvey, Flyying Colours and the Jezabels. The “supergroup” Minor Victories just put out a helluva album. I love September Girls and their off shoot thing Cruising. I just found out about The New Lines, but it seems like maybe they’re already done… Man of Moon seems promising. Locally here in the Pacific Northwest I’m digging Nostalgist, Jigsaw Puzzle Glue, and Tender Age among many others. There’s an artistically thriving scene in both Seattle and Portland at the moment.

Q: Which band would you love to made a cover version of?
We love playing covers. We just let loose an EP of Spacemen 3 covers on youtube. In our live set of late we’ve been doing everything from Echo and the Bunnymen (“Do It Clean”) and the Gun Club (“Sex Beat”) to the Beastie Boys (“Gratitude”) and the Damned (“New Rose”) and most recently we’ve been working up versions of the Ocean Blue’s “Between Something and Nothing” and “Shivers” by The Boys Next Door. We’ve been known to get a little weird with a Kraut-rock-y version of Salt n Pepa’s “Push It” and a mash-up of Jay-Z’s “99 Problems” with the Monkees’ “Stepping Stone,” as well. I’ve always wanted to do The Church’s “Reptile,” but somehow never get around to it. The Church has long been my favorite band…

Q: What are your plans for the future?
We’ll be releasing at least one new album by the end of the year. We have a second that needs a few tweaks and then that will drop as well. We also have some studio time booked through our label (Neon Sigh) to cut a few new songs for an EP. We’d like to hit the road again sometime soon, as well, but those plans are currently on hold while we finish up the recording part of things.

Q: Any parting words?
My personal credo taken from Love and Rockets’ “A Private Future”:
“Live the life you love, use a god you trust, and don’t take it all too seriously.”
*
*
*
Thanks