Anywhere with Cassettes on Tape - An Interview 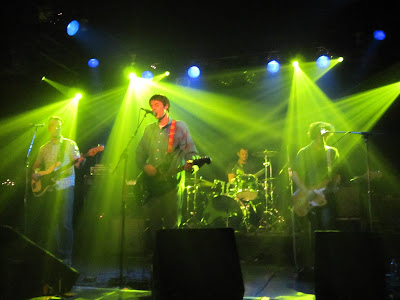 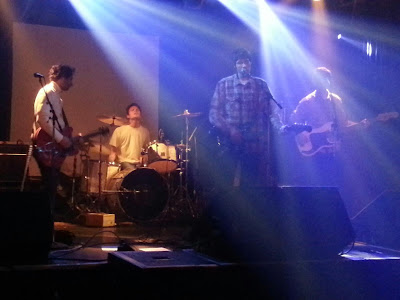 Q. When did Cassettes on Tape start? Tell us about the history...
Chris (drummer) and I (Joe on vox/guitar) began playing with each other in 2009 in a band called Das Fur Kots. We changed the name to Cassettes on Tape in 2011, because frankly no one could pronounce or remember our name. Shortly thereafter we lost our lead guitar and bass player. Greg was an easy choice as the new bass player. He is my brother, and we share a lot of the same sensibilities and musical tastes. (Funny thing: Chris and I only have ever had bass players named Greg in the different version of this band). We were already moving towards the fuzzy and reverb-rich guitar sound when this happened. So when we were looking for a new guitar player, we directed our search with this continuance in mind. We wanted to find someone who loved Johnny Marr and Kevin Shields and J Mascis as much as we did. That’s when Shyam came in. He had recently moved to Chicago from Washington, DC where he was formerly in the band Metropolitan. The first time he played with us, we knew that he was the perfect fit, hand in glove so to speak.

Q: Who are your influences?
If it’s not obvious, we really love the 80’s/early 90s UK indie scene. The Cure, the Chameleons, MBV, Slowdive, New Order, Stone Roses, the Smiths, and Jesus and Mary Chain to name many. And that only scratches the surface. We like anything with a lot of guitars and hooks and lively drums. On this side of the pond, I’d say Dinosaur Jr, Pavement, Sonic Youth, the Replacements, and Superchunk spoke to us.

Q. Make a list of 5 albums of all time…
This is really hard, but I’d say
JAMC-Psycho Candy
Pavement-Slanted and Enchanted
Dinosaur Jr-You’re Living All Over Me
MBV-Loveless
The Cure-Disintegration

Q. How do you feel playing live?
Playing live is a blast. We don’t take ourselves too seriously. We just want to turn up our guitars, play as loud as we can, and do justice to our recorded songs. We just like to have a few drinks, pour out some energy, and try not to screw up.

Q. How do you describe Cassettes on Tape sounds?
A lot of fuzz, and reverb. But we take a lot of pride in our songwriting. If there’s not a hook in our riffs or vocals, we aren’t interested. We hope that comes through. When we write a song, we want people to recognize and feel our influences. If someone walks away from hearing a song saying that it sounds like Ride or Ned’s Atomic Dustbin or Pulp, that’s a big compliment for us. A lot of bands don’t want to be called derivative. But we embrace it.


Q: Tell us about the process of recording the songs?
Our two EPs, Cathedrals and Murmuration, and our new LP, Anywhere, were all recorded the same way. We used the same great recording engineer and producer (Jamie Carter of Carterco in Chicago). Everyone is isolated in their own rooms, but we play the songs live trying to get a solid take and capture that energy of playing together like we do in our dingy rehearsal space. The biggest piece is the drums. Once Chris locks that down we can redub the bass and guitars. This is where Shyam really shines in adding layers upon layers of guitar to make the songs sound richer. The final step is usually my vocals and backing vocals by Greg and Shyam. Then we make everything just as wet as possible.

Q. Which new bands do you recommend?
I don’t know if we can recommend anybody that your readers haven’t already heard of. We are bit unapologetically stuck in the past. But current bands that we like a lot are DMA’s, Soft Kill, Merchandise, Nothing, Whirr, Sioux Falls, and Swearin’. As far as Chicago, there are so many great bands like Star Tropics, Airiel, Panda Riot, Wired Minds, and Pink Frost.

Q: Which band would you love to made a cover version of?
A simple direct choice would be Pale Saints Sight of You. But I’ve always liked the idea of taking a song from a different genre and making it our own. I once suggested the idea of covering Deep Blue Something’s Breakfast at Tiffany’s and was almost kicked out the band. So if your readers have any suggestions, we’d love to hear them.

Q: What are your plans for the future?
We just released our first LP Anywhere, so we are going to play some shows in support of it. But I don’t think it’s going to be long before we start working on songs for a new record. We really dig recording and seeing what we can do in the studio. And we love to see how people respond to our material.

Q: Any parting words?
Just a big thanks to everyone like you that is supporting us and the kind words they have about our music. We’re just four guys who like to pretend we’re in Echo and the Bunnymen. So it’s really been a kick.
*
*
*
Thanks