Cooler Coast with Castles - An Interview 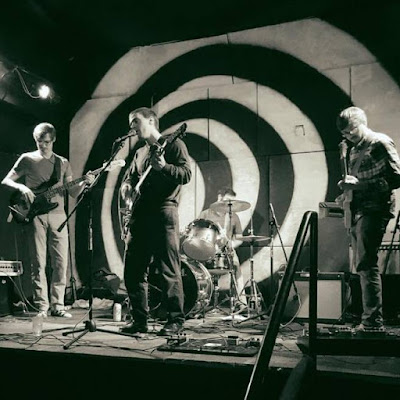 Q. When did Castles start? Tell us about the history...
Tom Wortman and I started collaborating in 2012, playing nothing but distortion-heavy songs, me on rhythm/vocals and him on drums... he had to drive a distance to my parents' house where I was living at the time, which was brutal! Despite Tom's awesome fills, my folk-like rhythm wasn't accomplishing much instrumentally. In 2014, we found Eric Wenzel and got the catchy, melodious lead guitarist we'd been wanting, and put some nuance into our playing, ditching the excess fuzz. Bassist Adrian Swindells joined us soon after, adding some excellent groove and structural direction to our songs. At that point we were actually 'CASTLES', with all of us sculpting every song together and finding a sound that felt natural to us.

Q: Who are your influences?
I like a lot of goofy-but-amazing styles: Disasteradio, Sonny and the Sunsets, Deerhoof, Animal Collective. On the mellow side of things where my emotions are at half the time: Seapony, Sparklehorse, Toro y Moi, Dent May, Beach Boys. On the alternative side, Smashing Pumpkins and The Flaming Lips have been huge for me over the years. And lyrically, Joanna Newsom is kind of the holy grail, along with The Magnetic Fields. Vocals that do their own thing are the best.


Q. Make a list of 5 albums of all time…
The best I can do is '5 personal favorites'; factoring in popularity or hype would be a nightmare to me:
Animal Collective - Spirit They're Gone, Spirit They've Vanished (weirder than Merriweather)
The Flaming Lips - Clouds Taste Metallic (an absurd number of classics)
Smashing Pumpkins - Mellon Collie and the Infinite Sadness (just ignore a few of the angsty songs)
Fleet Foxes - self-titled (the melodies are near perfect)
Joanna Newsom - Ys (a complete and utter epic)

Q. How do you feel playing live?
I'm usually reinvigorated by the idea that the crowd's hearing the songs for the first time, it lets me hear everything totally fresh. It really feels like I'm doing something I want to do, which is rare.


Q. How do you describe Castles sounds?
Melancholically happy, or maybe bittersweet. The melodies are somehow powered by nostalgia to me, they invoke the same kind of feeling as remembering something wonderful. The genre is kind of secondary to that in my mind, but dream pop, shoegaze, and psychedelia are pretty fitting descriptions.

Q: Tell us about the process of recording the songs?
For 5 or 6 full weekends, we drove a couple hours to Robotboy Records in Eugene, recorded and mixed until all our brainpower was spent, then came back to Portland. There was a lot of greasy food, Marble Madness (a band pastime), and tossing around of ideas. We tried to nail our live sound without adding too many bells and whistles, and we cut out a fair amount of material to find something cohesive. Although we definitely weren't striving for perfection, we had to do a lot of fine-tuning to get it sounding stellar for each one of us individually.

Q: Which band would you love to make a cover version of?
The Shaggs. I feel like with the right arrangements, more people would understand that they actually had some awesome melodies and ideas, and aren't just enjoyed ironically!

Q: What are your plans for the future?
We're constantly working on new songs and trying to hone in on the sound for our next EP or LP; there's probably going to be a bit of psychedelia, some spacey doo-wop, maybe this one song that's fairly disturbing... we're still figuring out the kind of themes we want. The next release will be even better!

Q: Any parting words?
Everyone do something you love ASAP! And check us out on facebook as we tour: https://www.facebook.com/castlespdx
*
*
*
Thanks