Unfold with Slowly - An Interview 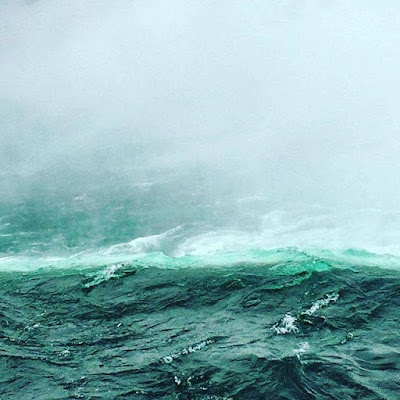 
Q. Hello Charlie, first congratulations , Slowly is really brilliant, what is your analysis after conclusion of the two first tracks? Are you happy with the result?
First off, thank you so much for the chance to talk about this project, I’m very excited! Slowly is a pure passion recording project, something I do in my spare time between writing music with Soft Wounds, and all the other things that life brings my way. If even a few people appreciate it and want to download the music I am releasing, that's all I could hope for! So far with the first two tracks (‘Melt’ and ‘Same Lines), there has been a good response and I have been having songs downloaded pretty regularly, which to me is a win! The songs released to date are just a taste of what’s to come, so if you like what you hear, there's more on the way!

Q. How was the process of creating 'Unfold"?
With Slowly, I am releasing ‘Unfold’ one song at a time, in real-time…so the creative process for the album is ongoing! As each new song is written and recorded in my home studio, I release it through the Slowly bandcamp (for free) and then start working on the next song. It’s fun doing it this way, because even I don’t know how many songs the album will have when I am done (or if I will ever be done), and the previous songs always inform how the next song(s) might sound. I like that the digital format has allowed me to release an album that can change/evolve over time, and I like that is not super defined, allowing me to explore different directions as I release and write new songs. I also like that people can enjoy the previous songs I have written without having to wait for a whole album to be finished. I like the idea that people who are into Slowly can sort of be in on my creative process and see how it works as I write music. I have been in a lot of bands before, but I have never done it this way, I usually write a bunch of songs, recorded them, and release them all at once. I am excited to try out this new method of releasing an album.

As far as recording for Slowly, I work on the songs at home in my basement studio with my cat watching me...she seems to have a good time, so to me that is all that matters. I don’t have the most elaborate recording setup, but it works for me. The only thing that I don’t do myself is mastering, my friend Tom does that part fort me.

Q. What are the main differences between Slowly and Soft Wounds?
I guess the biggest difference is in Slowly is that it’s all me. Soft Wounds is a full band, and even though I write the basis for most of the songs, having the rest of the band collaborate will influence and greatly help to shape the final version of a song. With Slowly, it’s all me…I liked the challenge of seeing if I could write every part (guitar, bass, drums and vocals), record it on my own and do all of the artwork, photos, etc, myself…so far, I am happy with the results! Also, Slowly songs are allowing me to explore some of more post-rock and slowcore influences, but still with a creamy shoegaze center.

Q. What were the influences for Slowly?
I am influenced by a lot of bands/musicians (too many to name)…for this project, genre-wise it’s a lot of shoegaze, noise rock, post rock, indie rock, 90’s slacker rock, slowcore…even a little sludge/doom stuff, I am throwing them all in a pot, stirring and seeing what comes out…hopefully people think it tastes good! :)

Q. What are your plans for 2016?
Soft Wounds (http://softwounds.bandcamp.com) is currently working on some new material, and we hope to record a full album within the next year. With ‘Slowly’, I hope to release a new song every month…so check back athttp://slowlymusic.bandcamp.com often to hear/download the new additions to the album as they are released! :)

Thank you so much for the opportunity to talk about this project, and thank you for all you do to showcase great new music!
*
*
*
Thanks
https://www.facebook.com/slowlyisaband
Postado por TBTCI às 03:57