The Glistening One with Sansyou - An Interview and Premiere 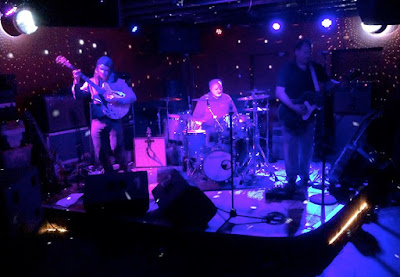 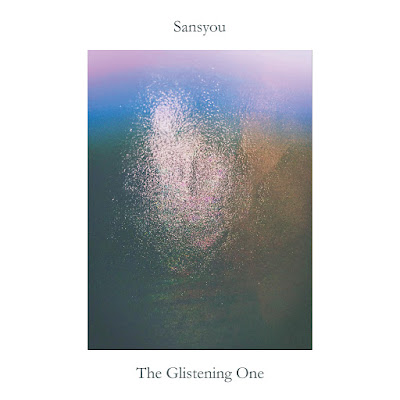 Q. When did Sansyou start? Tell us about the history...
- Sansyou began as an acoustic project with hand percussion, 12 string guitar and cello. It was a way to step out of fully electric bands with vocals and bass so we could start exploring instrumental music in a different way. We played out a fair amount but never captured an accurate recording of that incarnation. Around the summer of 2011 we felt like it was time to plug back in and go electric, so Davis joined on drums and Matt and I moved to electric guitars and have been developing that sound ever since.

Q: Who are your influences?
-We listen to a lot of different things and I am sure it all filters through into our sound. Some of us grew up through the punk rock scene, then post-punk and plenty of tangents along the way. People have heard elements of Vini Reilly, Robin Guthrie and Peter Buck in our guitar sounds and that makes sense. We take inspiration from lots of things outside of music, like just talking about an image or feeling. That will often suggest ideas that turn into songs. One of the pieces on our new recording, Rise of a Fall, is based on some completely irrational waking nightmares I've had about falling backwards off an incline that pitches too steep to climb. It tied into some pieces of music we were developing at the same time that had an ascending/descending pattern but hadn’t come together as a whole yet. So ideas like that tend to influence the sound.

Q. Make a list of 5 albums of all time…
-When we talked about this, three "P's" came out. Pub-rock, Prog-rock, and Post-rock. The song craft of Elvis Costello, particularly Armed Forces, was lost on me originally, but Davis really locked into it and I appreciated it later. It didn't necessarily feature tons of guitar but the hooks and structure are really smart. For the prog-rock, we all love Pink Floyd, particularly Animals. We managed to see Rush on their last tour, so Hemispheres goes on the list. For post-rock sounds, I turn to the Sea and Cake all the time; all their releases are great, especially Runner. And in between, things like Nowhere by Ride are key as well.

Q. How do you feel playing live?
-Lucky that we can do it. And definitely thankful that there are places for us to perform and an audience to play to. We dont take it for granted. For us, the challenge is to plan a set that maintains interesting dynamics and builds some tension and release. As instrumentalists we try to draw the audience in by building that feeling of an arc into the set. Matt is really tuned into this and usually has a sense for what will work based on who else is on the bill and the venue, so we’re never just repeating the same set.


Q. How do you describe Sansyou sounds?
- The advice that resonates with me came from Geordie Walker of Killing Joke. He has such a singular, unique sound, I asked him how he does it, and he said, "Play what you want to hear". Just as easy and hard as that. So what do I want to hear? Something that is rich, full and expansive. Sometimes convey a sense of floating or suspension, and then sometimes forward motion. That feeling of being underwater and seeing nothing but blue in every direction. I want the sound to capture that feeling; and to do it instrumentally, without any obviousness from lyrics. Working without bass or vocals allows certain elements to come forward that otherwise would be lost. I definitely pay a lot more attention to what drums can do and give more space to them. It's more than a backbeat and Davis has composed pieces that we translate into guitar parts in ways I've never done before, like the title of our prior release, The Dilettante. On the newer songs, we’ve worked in some more aggressive sounds and use them dynamically, so that’s been an interesting path of the moment.

Q: Tell us about the process of recording the songs?
-We put a fair amount of pressure on ourselves to stay honest to what we can perform live. Tracking for this new recording was done quickly since we'd been performing the songs for some time. We recorded live as a trio and didn’t take long to get a good take. For our prior release, we really stayed minimal and did hardly any overdubs. Just the three of us in a small room with small amps. The songs suggested that approach and it worked well then. On this new recording, The Glistening One, the songs stretched out a bit more and invited a harmony line here and there so we added that this time. Nothing extravagant but I think the additional parts help fill out the sound. We all felt like if a new part was in our heads, it was at least worth trying and questioning it together. There was no shortage of guitars or amps, so we used those for new textures. We try to walk a fine line of keeping that economical, minimal approach with enough white space and yet color in just the right amount of shading too.

Q. Which new bands do you recommend?
- There are so many. Right in DC, we are lucky to have bands like Tone, Boat Burning, The Mantis, Lost Civilizations, The Orchid, The Caribbean and many others. I definitely recommend checking out their recordings for a sense of what is happening here.

Q: Which band would you love to made a cover version of?
-We've put this as a challenge to ourselves more than once! We actually pulled off an instrumental version of Heart and Soul by Joy Division for one performance. Davis made a loop for the bass part and Matt pulled up some sustained pads to interpret the keyboard parts while I did Ian Curtis' vocals on guitar. I was glad we pushed ourselves to do that since their music is so foundational.

Q: What are your plans for the future?
-We are ready to get The Glistening One released on Moon Sounds and play shows through this year. We have loads of songs ready for the next release already and will play those live too. And we never stop writing and finding new sounds. We might revisit using piano too, which we haven’t done since our first release, When We Become Ghosts. In the short term, we hope The Glistening One reaches people with an ear for instrumental music.

Q: Any parting words?
-Thanks for your work here on TBTCI! I've learned about lots of cool bands from your writing and hope you keep it going. Curating the good music and steering your readers to it is more important than ever today, so thank you.
*
*
*
Thanks