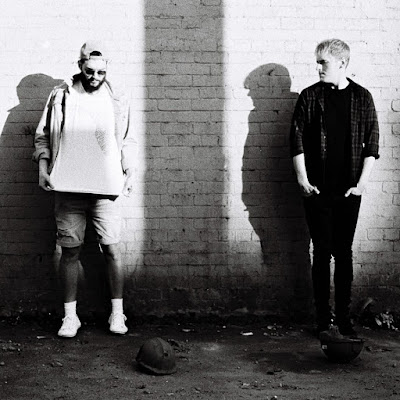 
Q. First, congratulations on your debut, sounds really gigantic.
How was the process of creating "Chamber Piece"?

Rewarding I'd say. We wanted it to sound grimy and have a sense of looming chaos, like the roof might cave in on your head at any moment, which literally could have happened in one of the locations we recorded in. We recorded part in a studio, which was really nice and comfortable but we made the decision to move to a space that would have a more obvious imprint on the character of the sound and so recorded the rest in this big mill in Salford.

Q. What were the influences that shaped the EP?
I think the biggest influence is the mentality that music needn't be about virtuosity, at least not in a traditional music sense. I don't read or write music as I have never been interested in theory, I'm more excited by musicians who approach instruments in an uninformed way.

Q. What are the main differences between the first singles and the EP?
We actually decided to include our early singles in the EP as the songs were all written in a similar period and definitely felt part of the same world. I think our sound will continue to evolve so it's nice to group these sounds together. There were other songs we recorded at the start that we ended up not releasing for one reason or another, mostly as they didn't feel challenging I think.

Q. What are the plans for 2017?
We're going to focus on promoting Chamber Piece and then we're taking a break until Autumn. I'm writing lots of new stuff at the moment though, it's great when you hit a creative streak.

Q. Final considerations ...
Chamber Piece is best listened to at night through headphones, but fuck who am I to tell you what to do right? As long as you hear it I don't give a fuck.
*
*
*
Thanks