Bad Songs for Good Girls with Red.Deer- An Interview 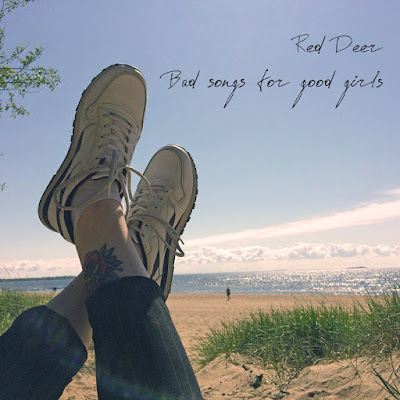 Q. When did Red.Deer start? Tell us about the history...
1. I started making music 5-6 years ago. At that time I lived in a small not far from the Northern capital, I had an acoustic guitar an a big wish to make it sound. Then I learned how to play and understood, that my possibilities wouldn`t be fully disclosed with this instrument only, so I started studying sequencers. The first one was, of course, FL Studio. My first albums were made in it, then I learned Cubase and worked with it. A lot has changed since then and I grew up as a musician.

Q: Who are your influences?
2. During the life different bands and musicians had an impact on me. I was influenced the most by Thom York, Mogwai, Gos is an astronaut. Among the Russians - Dolphin and Pavel Dodonov.

Q. Make a list of 5 albuns of all time…
3. Certainly, this is Ok computer (Radiohead), in rainbows (Radiohead), The end of beginning (God is an astronaut), Music for airports (Brian Eno), Oshin (DIIV)

Q. How do you feel playing live?
4. When I`m on the stage, I feel like I do something important - as for me, as for the audience. It gives me strength and sense to keep on creating.


Q. How do you describe Red.Deer sounds?
5. First of all, Red Deer is a reflection of my music taste. There was time, when I focused on live instruments, there were album, when I felt like adding more electronic sound. I always have an argument with myself: to come to electronic sound or to make interesting guitar parts. Recently, i`ve started combining these two moments. In the last album I started singing. All in all, I`d describe Red Deer`s music as melodic with an attempt of aggression.

Q: Tell us about the process of recording the songs ?
6. I always make the whole music at home. I have a laptop, a sound board, instruments and a mic. Considering the comfort and no material costs, it`s easier to make music at home, especially now, when I try to make it more electronic.

Q. Which new bands do you recommend?
7. The band Mercurium, with the girl on vocals, I recorded one song with her for my another project (Wintermilk). Div I Ded, cigarettes after sex, Perturbator.

Q: Which band would you love to made a cover version of?
8. I`ve already made covers, one of them is Ghost Rider (Suicide), now I don`t want to make it, but if I wish, I would choose the song of The Horrors.

Q: Any parting words?
10. To sum up, I`ve noticed, that there are much more musicians now than a few years ago. By the time, there are more and more of them, so it becomes very difficult to get to the top, especially in Russia. But I don`t give up and keep on doing what I can do - making music.
*
*
*
https://reddeermusic.bandcamp.com
Postado por TBTCI às 14:08