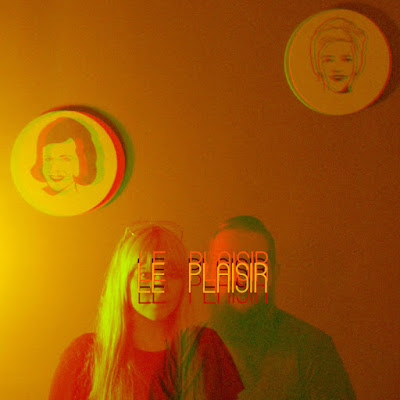 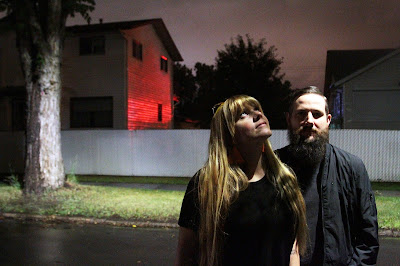 Q. When did Le Plaisir start? Tell us about the history...
We're a two-piece kinda spacey psych-pop band that started when Doug and I moved to Paris in 2015. We mostly just started making music together because we were new in town and didn't know anyone yet and we needed something to do. It was definitely not a serious, focused effort. We were just messing around. Before Le Plaisir, I played in a band called The Lad Mags (we shared a drummer with Betrayers and did a bunch of touring with them). Doug had recorded all of The Lad Mags' songs at his studio in Edmonton, so we had worked together a bit in that capacity, but Le Plaisir was the first time we really collaborated on songs together.

Q: Who are your influences?
We were just having a conversation the other day about bands who inspire you vs. bands who actually influence your sound. We don't really sound like any of these bands so I guess they are more like inspiration than influence, but we both really dig Moon Duo, Radiation Flowers, The Kinks, Silver Apples, Black Sabbath, Young Marble Giants, Jacco Gardner, Betrayers, Spacemen 3, The Backhomes... The two of us actually have pretty different taste in music, and Doug would probably give a very different list, but we agree on these bands for sure.

Q. Make a list of 5 albuns of all time…
Oh man... that's the toughest question. I would have a different answer to this every single day. I can't commit to picking 5 albums of all time, but 5 records I will never be tired of listening to:
Sleep's Holy Mountain,
Flying Burrito Brothers - "Guilded Palace of Sin",
The Stooges - "Raw Power",
Kikigaku Moyo - "Forest of Lost Children",
Aphrodite's Child - "666".

Q. How do you feel playing live?
We actually just played our first show together last week! I am used to playing in a band with 5 people, so the stage felt really big with just the two of us. Maybe we should figure out some dance moves or pyrotechnics or whatever to fill up all that space? But seriously, it is really comfortable for us to perform together. Doug is super talented and really calm, and we know each other so well that it just feels laid back and fun to do our thing.

Q. How do you describe Le Plaisir sounds?
Synth-drenched psych-pop songs, I guess? Our recent EP was a concept album about the end of the world and the freedom and romance in watching it all burn down. Doug is a major synth nerd and a very technically proficient musician and my background is in more scrappy garage-y bands and Le Plaisir is the tiny bit of common ground that we could find between us.


Q: Tell us about the process of recording the songs ?
Our EP was half recorded in Paris and half in Edmonton. Doug is also a recording engineer, so we had the luxury of just recording bits and pieces whenever we felt like it, rather than having to commit to blocks of studio time. We made shitty little demo versions of the first couple of songs in this TINY apartment in Paris, and Doug recorded them on this portable Pro Tools rig he had brought with him from Canada. We later started running an artist residency in Paris so we had access to a nice big space that had really beautiful acoustics, so we recorded the final version of Feathers there. If you isolated the tracks from that song you would probably hear Paris traffic in the background.

We moved back to Canada a few months ago and finished the rest of the EP here in Doug's studio. He has a massive collection of rad vintage gear so we got to play around with a lot of great stuff while we were figuring out how the final versions would sound. When we started making these little bits of songs in Paris I didn't think we would really even end up releasing anything, but I actually really dig how this EP turned out, so I think we'll keep at it.

Q. Which new bands do you recommend?
They've been around for a year, but I finally caught on to Here Lies Man and they are fucking amazing. They're like, heavy psych stoner afrobeat. They completely rule. Highly recommended. I am really into the most recent record from Radiation Flowers, too. That band has also been around, but the record is new and definitely worth giving a spin. Brunch Club (also from Edmonton) are so great.

Q: Which band would you love to made a cover version of?
Our EP that we released last week has a cover of a really early Eurythmics song (like before Sweet Dreams made them a K-Tel Hits-of-the-80s cliché). That song ("Never Gonna Cry Again") had been on my list for a long time, it's such a great, moody jam with so much texture, even though it is so simple. I've always wanted to do a super spaced-out version of Something's On Your Mind by Karen Dalton. Maybe that will be next.

We kept our cover pretty close to the original, but I always really admire when bands completely transform the songs they cover and turn them into something totally new. Betrayers did a cover of "White Horse" by Laid Back that was so great that way, and another one of my favourites was the cover of "Fast Car" done by another Edmonton band, Switches. They turned this iconic folk song into a rowdy punk anthem, and it totally worked!

Q: What are your plans for the future?
We are kind of in the middle of getting our shit together to move to LA in the next while, but in the mean time I think we'll work on getting a full-length record released and do some touring. The great thing about being a two-piece band that are also married people is that touring is so easy! No more sharing tiny shitty hotel rooms with 5 people!

Q: Any parting words?
Thanks a ton for taking the time to give our EP a spin and talk with us. We totally appreciate it. I hope we can make it down to Brazil someday. Everyone I have met who has toured there says there is no place better to play shows.
*
*
*
Thanks