The Sand Collector's Dream with Carta - An Interview 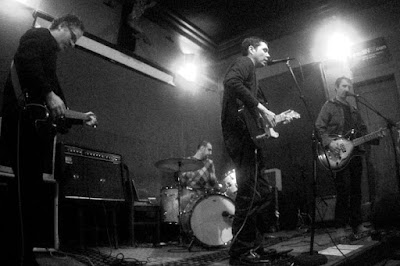 Q. When did Carta start ? Tell us about the history...
Kyle: Carta started in the early 2000's as an of outgrowth of my involvement with ambient/post-rock band Charles Atlas and the first Carta album piggybacked on the sessions for their final album, "..to the dust...". Both Sacha and Matt from that band contributed to the first Carta album ("The Glass Bottom Boat") . I, Ray and Sacha pushed forward with a more stable band after that album came out and we felt like we should play shows to support it. We had a few drummers, including Raj Ojha who went on to play with Howlin' Rain and the Once and Future Band, but for the past several years Gabriel Coan, who also plays with the Orange Peels, has handled percussion as well as many of the electronic portions. Gabe had been in the band Continental who we'd played with and known in SF for years and I'd always wanted him to play drums for us. And then when Continental ended, he did.

Q: Who are your influences?
Kyle: When the band started out I was heavily influenced by bands who have gone on to become friends, like Disco Inferno, Hood, Tarentel, Piano Magic, Lisa Germano, and sadcore bands like Codeine, Red House Painters, and American Music Club. And there's a kind of early 80's art-rock that has always appealed to me: Peter Gabriel, David Sylvian, Talk Talk, then, later on, the first generation of 'post-rock' from the UK like Bark Psychosis, Pram, Long Fin Killie. I think we've all absorbed these sounds, and they've rubbed off in some ways; some of it is certainly evident in the last two albums.

Kyle: Sacha was in a band on Mute (Rosa Mota) so I think Mute is all over everything to a degree.

Gabe: The overall sound and feel of this album was influenced by Depeche Mode and Tears for Fears, very specifically the "The Hurting" album. I kind of lost interest in playing acoustic drums for a while, and that's very evident on "The Sand Collector's Dream". And as I was shaping sounds and layering parts, I would ask myself: "What would Martin Gore do?"

Sacha: I have a very varied interest in music, my father introduced me
to Django Reinhardt, The Modern Jazz Quartet, Antonio Jobim, Sergio Mendes, (Late) Beatles and Manduka. Later on bands like The Bunnymen and Bauhaus introduced me to The Velvet Underground, Lee Hazelwood, John Cale and Brian Eno. 80's reggae from Sly and Robbie is always on my turntable with more experimental sounds like Delia Devonshire and Peirre Bastien.

Q. Make a list of 5 albums of all time…
Kyle: Impossible but here are 5 that have lasted for me that come to mind:

Sacha: This is very hard and changes over time.
Off the top of my head....

Q. How do you feel playing live?
Kyle: Usually I feel terrible. I once played a show right after eating a bbq seitan sandwich and almost never played live again. We played live around the Bay Area for years but with decreasing frequency lately due to a dearth of compatible clubs in San Francisco. When we do play now we try to do it with other friends, in more low key or odd venues.

Ray: I think we are at our best when we play in non-traditional spaces like art galleries. Sacha and Kyle played a drone piece at the Oakland Columbarium and we've even played in a dress shop.

Sacha: Making music has always been my passion and playing live is a sometimes necessary part of the that. i.e. supporting an album. We play small shows these days...supporting friend's bands, playing art galleries etc

Q. How do you describe Carta sounds?
Kyle: The go-to description I've given out has been "Paranoid inner-vacuum micro-dub and ruminative post-space hypno-drone." Easier to say what we aren't: we are not a shoegaze band; we are not a post-rock band. Ghost rock has been the best descriptor I've seen.

Sacha: The Carta sound has evolved in the past ten years. The No1 album being mostly instrumental and soundscapes. No2 has a more harsh sound than the first and intertwined songs with more experimental sounds. No3 I think is very powerful with external unhappy events influencing the music and lyrics whilst still capturing beauty. No4 has more songs but perhaps too new to fully describe presently.


Q: Tell us about the process of recording the songs ?
Kyle: Many songs the new album ("The Sand Collector's Dream") and the previous one ("The Faults Follow"), were largely written in the studio from electronic beds of sound generated by Gabriel; typically he'd present something, sometimes something very very long, and then the rest of us would write on top of it, and then collaboratively we'd shape the song while recording and overdubbing. It was a great luxury to have access to two studios to do this in for as long as we needed.

I think only two songs came in fully written before recording, the title track and "The Last King of Rome" which we'd been playing live for a while. On each of our albums we've had guest vocalists with lovely voices; the first was Sarah, who played keys for us for a while; the second was a woman named Lorealle, who we'd ask back if she ever extracted herself from Oregon; and our friend Odessa Chen sang a lot on these past two albums. I've known her in SF for many years and was always a big fan; I think I got her to sing on the last Charles

Atlas album. Jon DeRosa was on one of our previous labels and I've also always been a big fan of his voice and his music (as Aarktica) and I just like him as a person. I was so pleased with the contributions Odessa and Jon made to the new record. We mixed the whole thing with Eli Crews who did our first two albums. He's one of the only people who puts me completely at ease in a studio.

Sacha: Every album has been different, The process is varied and includes one of us coming in with an idea, two people playing together to form a skeletal song form, a drum beat, a chord, even colleagues and friends coming up with ideas and us going from there. This last album was all of these things with Gabe being the person in the middle stitching things together and recording sounds.

Ray: Craig Escalante also sent us a guitar passage that ended up turning into a complete song.

Q. Which new bands do you recommend?
Kyle: Being old now, I'm not very good with new music. I like Wax Idols a lot, and Drab Majesty. That all sounds a bit goth, doesn't it? My friend Shana Falana puts out great albums on Team Love, if you like shoegaze and wall of sound. Everyone who likes that should give her albums ("Set Your Lightning Fire Free" and "Here Comes The Wave") a listen.

Ray: I love the latest by Childhood (Universal High) and the Alex the Astronaut EP is really great, but Pete Astor's Spilt Milk is my favorite in the last year.

Sacha: At the moment I'm listening to The Fat White Family and Kate Tempest.

Q: Which band would you love to made a cover version of?
Kyle: We're in the process of putting together an album of cover versions of songs by I Start Counting, Gary Numan, John Cale, Brian Eno, a few others. I also want to record "Sara" by Fleetwood Mac. Gabe and I talked about getting many people to do a whole album of covers of that song. It might happen. It's a perfect song.

Ray: What Kyle said. Early 80s electronica is really fun to cover and I think it's in our DNA as a band.

Sacha: We are recording songs as we speak....mostly 80's songs. Its a fun adventure and challenging, in as far as respecting the songs and artists but having ones own slant on it.

Q: What are your plans for the future?
Kyle: We are doing the covers album, should be out in some manner next year; at the same time, in order to mark both the 10th (well, 11th) anniversary of the first Carta album, as well as the 50th anniversary of writer Anna Kavan's death, I'd like to put out a vinyl album collecting remixes of the song "Kavan" that opened that album and which was named after her, as well as some of the remixes we are releasing as bonus tracks for the new album as digital downloads only for now. There are very good people who are doing remixes: Yellow6, Piano Magic, The Declining Winter, Roger O'Donnell of the Cure, Gabriel Coan, Sybarite, Mark Van Hoen. I'd like that to be a very lovely Carta release; do the whole thing, colored vinyl, gatefold, exclusive artwork, liner notes about Anna Kavan, who was, I think, a terribly overlooked and underrated writer. After that, who knows. We seem to release a new album every 4 years, which isn't very often. I don't know if America will last another 4 years.

Sacha: See above.....finishing and releasing our covers album. Once that is done we'll take a step back, lick our wounds and plan the next attack

Q: Any parting words?
Kyle: We always appreciate any coverage we get, and any listeners we manage to hook, and anyone who purchases our music. Despite how easy it is to record and release music these days, it's still an art, and art -- whether audio, visual, or written -- too often offers scant gratification when placed in the public space. So thank you.
*
*
*
Thanks