American Sushi Sessions with After Care - An Interview 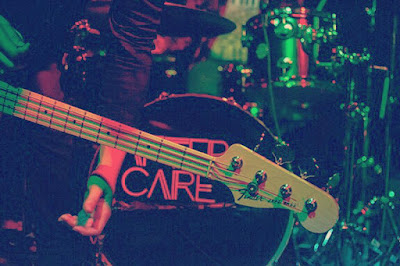 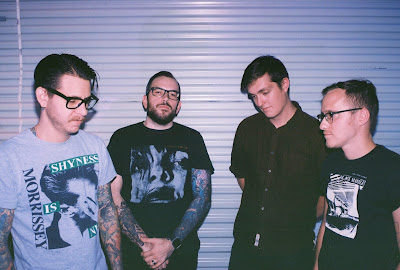 Q. When did After Care start? Tell us about the history...
Ben: After Care first started about a year ago in the summer of 2016. After discussing our mutual love of shoegaze music and David Lynch, Joey and I got together and began playing around with some guitar parts. Within our first couple practices, we felt like we were on to something special and began jamming with Matt and James. We all clicked immediately and quickly began playing live shows around Atlanta.

Q: Who are your influences?
Ben: Nirvana’s simplicity, nihilism and catchiness and Slowdive’s otherworldly soundscapes are my biggest influences with After Care.

Joseph: Bands like Slowdive and My Bloody Valentine have a huge impact on us obviously. Cloakroom is another great band I think a lot about when I write. Most of all David Lynch movies inspire a good bit of our writing.

James: As far as my bass playing goes, Nirvana is a huge influence, but I also have a ridiculous amount of pedals for a bass player, and for that I have to blame, Explosions in the Sky, O’Brother, and my love for post-rock/shoegaze in general ha.

Matt: The Smashing Pumpkins are a big inspiration, I try and channel Jimmy Chamberlain as much as possible when we write.

Q. Make a list of 5 albums of all time…
Ben: The Twin Peaks soundtrack x5

James: For my personally, (in no particular order)
The Chariot : Long Live
Brand New: The Devil and God are Raging Inside Me
Converge: Jane Doe
Pedro the Lion: Control
Underoath: Define the Great Line

Q. How do you feel playing live?
Ben: I usually feel pretty spacey.

Joseph: It's the most rewarding and cathartic feeling there is for me. Nothing beats it.

James: It’s incredibly cathartic for me personally, not counting the anxiety I have leading up in till the moment we start.

Matt: It's usually pretty cathartic for me.

Joseph: Have you ever gotten surgery before? Have they prescribed you painkillers? After Care sounds like lying in bed on painkillers. Heaven.

James: We sound like the band I’ve always wanted to see while very stoned in a dark room with beautiful lights.

Matt: Swirly, like staring at a Magic Eye painting for too long.


Q: Tell us about the process of recording the songs ?
Ben: “American Sushi Sessions” was tracked live at American Sushi Studios in Atlanta, GA by Aaron Hendrickson. Tracking live was a conscious decision we made in an effort to capture the atmosphere, abrasiveness and spontaneity of our live sound. We worked from 11PM to 5AM, so there was a dreamy vibe that made things really special.

Joseph: Aaron Hendrickson was amazing to work with. He's incredibly positive and gives fantastic feedback. We sorta named the EP "American Sushi Sessions" in honor of him and where he tracks. We definitely hope to work with him again in the future.

James: Pulling an all nighter was pretty rough, but so worth it.

Matt: Tracking everything live was a cool experience and definitely my preferred way for us to get these songs out to people. Our engineer Aaron was super easy to work with.

James: My good friends from CA in a band called Quiet, and another ATL local band called Harmacy

Matt: Atlanta is lucky in that we're a home to so many great bands. Can't recommend Thousandaire, Repulsory, or Cloak enough.

Q: Which band would you love to made a cover version of?
Ben: The idea of doing a Smashing Pumpkins cover has been tossed around a few times.

Joseph: Archers of Loaf - Web in Front
Talking Heads - This Must Be the Place
The Pixies - Monkey Gone to Heaven

Are all songs I have on my list I want to cover.

James: I’ve always wanted to do a cover of Neil Young or Bob Dylan and just make it weird and spacey.

Matt: Yeah, Smashing Pumpkins is definitely at the top of my list.

Q: What are your plans for the future?
Ben: We are currently promoting our “American Sushi Sessions” EP and working on material for a full length record. I’m stoked to play as many shows as possible and see where it takes us.

Matt: Playing shows in and out of town and recording our full length.

Q: Any parting words?
Ben: Thanks so much for checking us out. Say no to drugs.

James: Thanks for your time, and thank you for listening.

Matt: Thanks for listening
*
*
*
Thanks