Amour d'été with Françoise - An Interview 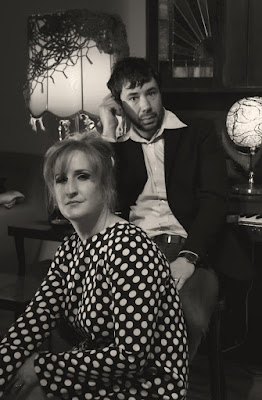 
Q. When did Françoise start? Tell us about the history…
Françoise started with a love story between Marc-André Beaudoin and me (Jacinthe Riopel). We metduring a karaoke party where I was singing songs from the 60's. A few years and a wedding later, the idea of having a band together came back and we decided to do it for real. We love the music that was played in Quebec during the sixties and we decided to treat ourselves by creating a band with these influences in mind.

When looking for to name the project; the idea of taking my middle name “Françoise” came naturally. We’re very fond of the retro-French-60s sound of this name.

In studio, to complete the band, we collaborate with our friends from Le Couleur(https://lecouleurmusic.bandcamp.com/ ) and with Félix Dyotte (https://felixdyotte.bandcamp.com/ ), allgreat fans of sixties music.

Q. Who are your influences?
For the sound, Marc-André is mainly inspired by the British invasion (The Kinks, The Who & The Beatles) and by 60’s American teen pop bands (Beach Boys, Jan & Dean). As I write lyrics in French, I am inspired by the songs Serge Gainsbourg wrote for France Gall and Françoise Hardy, as well as what was done in Quebec in the sixties, which was mostly great American hits translated into French.

Q. Make a list of 5 albums of all time…
With the Beatles – The Beatles
Blue Album - Weezer
Variations fantôme - Philippe B
And Marc-André wants to add:
Village Green Preservation Society - The Kinks
Odessey and oracle - The Zombies

Q. How do you feel playing live?
We are a new group. We have only played live once, in acoustic version, at our album release party. It was really exciting to play our songs in front of our friends and family. Amusing moment: My 7 year-old son came to play the tambourine on stage with us during the song “Hula Hoop”. We are looking forward to doing more shows soon.

Q. Which new bands do you recommend?
I really like the Montreal band Paupière. Their single “Rex” spins a lot at home. I recently discovered the band Bébé Soleil. Their first single "Souliers de course" sounds great, and I’m looking forward to hearing the full album.

Q: Which band would you love to make a cover version of?
We would definitely like to cover these songs:

Q: What are your plans for the future?
We have completed the pre-prod of the next album and we enter the studio early September for the recording. The launch is scheduled for next spring. We’re also planning to release a cover of a Christmas song during the Holiday season.

Q: Any parting words?
Check out our new music video for the song “Parasol”: https://www.youtube.com/watch?v=L3RpiCKNktk
*
*
*
Thanks