Very Pleasing and Desired with Cherry Heaven - An Interview 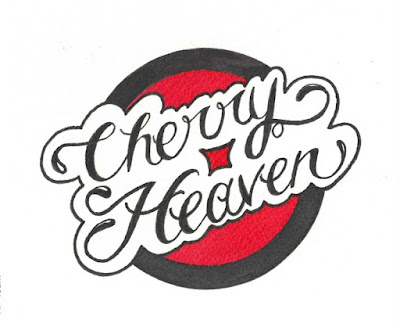 
Q: When did Cherry Heaven Start? Tell us about the history...
Tim: Cherry Heaven started as a project called "Dubbed Noir" in September 2015. We liked the idea of creating a hybrid band that blended multiple sounds and styles, particularly electronic music and rock 'n' roll. Initially, we'd get together and write these doomy little synth songs. The first one we ever wrote was called "I Think I Might Be Evil." For a year, we worked on songs and actually recorded an album that never got finished. It was abandoned late in the game in favor of new songs that felt a little more sophisticated. Late last summer, Cole did a remix of a tune called "Some Kind of Trip" that transformed the song from an ordinary demo to something that felt extraordinary. "Trip" set the bar really high and most of the tunes on "Very Pleasing and Desired" and our EP where written after that benchmark was made. Last fall, I traveled to New Orleans to record additional bass parts and vocals with one of my best friends, Stacey Colangelo, who also happens to be a very gifted tattoo artist. My buddy, Johann, also helped out with bass duties on several tracks. This winter, we became "Cherry Heaven" as it was the title of one of our old tunes that we liked a lot. It just felt right!

Q: Who are your influences?
Cole: My big, lifelong musical influence has always been Aphex Twin, but in recent years my approach to composition has been strongly influenced by fringe electronic artists like Burial, Zombie, and Actress, who de-emphasize beats and classic production value in favor of idiosyncratic, personalized production value and emotional ambient texture. This orientation is reflected in the LP where drum and rhythmic presence take a background role to other elements such as grainy, hazy, and distorted sounds.

Tim: I'm into classic alternative, synth pop and post punk. Art rockers are my kind of people because they tend to have an edge when it comes to songwriting and style. I like classic rock and singer-songwriter stuff too. I love Bowie, Iggy Pop, New Order,Depeche Mode, The Cure, Blondie, The B-52's, Gary Numan, Roxy Music, The Smiths, Smashing Pumpkins, Fleetwood Mac, Tom Petty and Kraftwerk, to name a few. I love female voices also, especially Kate Bush, Stevie Nicks, Siouxsie Sioux, Grace Jones, Debbie Harry and Donna Summer. I'll always have a soft spot for shoegaze and dream pop and never tire of the 4AD sound. I love Cocteau Twins, My Bloody Valentine, Lush and This Mortal Coil.

Q: How do you feel playing live?
Tim: Thus far, we have only been a studio project, though we've talked about maybe doing some shows later this year. Initially, I had no interest in playing live. I've warmed up to the idea but am honestly not sure how some of these tunes would go over live.

Cole: I like to perform elements of my musical interests that aren't as sympathetic to the album format. So for example, I am much more open to experimentation and improvisation in a live setting, and use the opportunity to allow a song to wander into other musical territory that wouldn't make as much sense on a focused, album-oriented track. Basically, I like to use the live presentation to remix and reimagine the album tracks.


Q: How would you describe how Cherry Heaven sounds?
Tim: I think we both love beats, guitars, synths, and atmosphere. There's elements of dream pop, post punk, alternative rock, electro-pop, shoegaze, trip-hop, classic rock, experimental and dance music in our tunes. There's a little bit of David Lynch too. We're not afraid of emotions or ugliness but also appreciate dumb pop songs with goofy lyrics.

Q: Tell us about the process of recording songs?
Tim: I write the skeletons of the songs in more of an old school way, often on an acoustic guitar or with my keyboard. I frame the tunes using what I consider to be a classic pop song structure, with verses and choruses and hopefully hooks and melodies. Sometimes the tunes come out fully formed from the get-go, sounding like full band arrangements, and other times they are more sparse. Cole and I then work on the tunes seperately and flesh them out. We use a file sharing service to send them back and forth and the sounds continually evolve. Eventually, we get together to mix the songs and make decisions about what gets released, vaulted or put on-pause for later.

Q: Which new bands would you recommend?
Tim: LA has a great music scene and with lots of little indie labels that are doing really exciting things. There's tons of cool local bands including Part Time, Winter, Tamaryn, Peaking Lights, Soft Metals, Geneva Jacuzzi, Gitane Demone, Kauf, Fatal Jamz, Puro Instinct, Nite Jewel, Cellars, Wyatt Blair, Autolux, Chasms, Annabel Lee, Tropic of Cancer and the Cosmonauts, to name a handful. Lolipop, Burger, and Spirit Goth are really cool labels. I love just about anything Johnny Jewel puts out on Italians Do It Better, especially the Chromatics and Glass Candy. Michael Stock is a fantastic DJ. He does a show here in LA called Part Time Punks on KXLU and he has excellent taste. You can stream his show every week on Thursday afternoons. I always look forward to it.

Q: Which band would you love to cover?
Tim: We've always talked about covering 10CC's "I'm Not In Love." For a classic rock staple, its really a weird, dark tune. It's dreamy and menacing. It has a timeless quality that feels simultaneously progressive and nostalgic. We had an early song called "Fall Into the Gap" which was inspired by "I'm Not In Love" but it was never finished. Recently, I've been working on a cover or Whitesnake "Is This Love" that sounds like MBV!

Q: What are your plans for the future?
Cole: More of the same! Cherry Heaven will continue to be an iconoclastic musical and creative experience. In general we anticipate continuing to develop an electro-acoustic fusion that bridges esoteric, underground electronic sounds with a shoegaze, pop feel. But one element that is unlikely to change is the dark and mysterious vibes that underpin Cherry Heaven's soul-aesthetic.

Tim: I've been writing for the next record and there's a bunch of ideas taking shape. I would say the new stuff feels different and is definitely next level, but also a logical extension of where we've already been. I don't really care for happy or feel-good music, but I would say the new stuff is maybe not as dark as the older material. It's more colorful, funky and even fun, but in a perverse way, of course!

Q: Any parting words?
Tim: Thanks for listening to Cherry Heaven! There's more on the way, so please stay tuned. We hope to visit Brazil someday!
*
*
*
Thanks