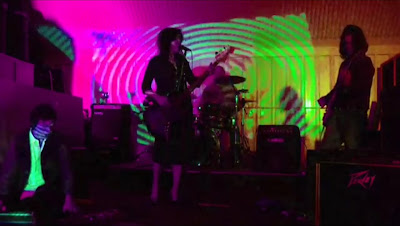 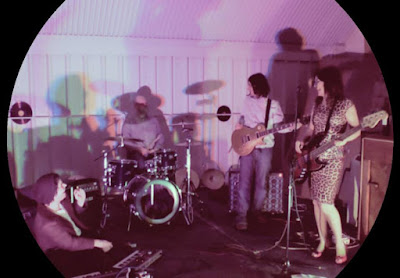 Q. When did Dream Demolition Factory start? Tell us about the history...
A. We formed in 2012. It began with Jeannie and Paul (vocals, bass & guitar) who started out writing songs together. We advertised for other musicians and met David (keys,synths). We went through more drummers than Spinal Tap to meet Ken, but he was worth the wait. We found a natural musical telepathy with Ken and sonically started to refine our sound. We released our first songs via Soundcloud and a self released an EP in local record shops.

Q: Who are your influences?
A. Psychedelia, (60's to present day) 60's Girl Bands, Post Punk, some Dream Pop and Electronica, Hauntology.

Q. Make a list of 5 albums of all time…
A. Revolver, Velvet Underground and Nico, Low, Unknown Pleasures, Loveless

Q. How do you feel playing live?
A. There is a different experience playing live because you are interacting with the energy of the audience which can bring out the best in us.

On a really good night, we hope to create this swirling maelstrom of mad noise (What's guitar? What's synth? Does it matter?) which helps our audience lose themselves in sound completely and transcend themselves for a few minutes. We are completely in the moment playing live. It can be cathartic and sonically we can even surprise ourselves. We want our live sound to be almost narcotic, shamanic! At our best live, we can be transcendent and other worldly.

There are certain sounds we love more than others; there's loads of lovely delay/looping pedals now which emulate old tape delays or the Binson Echorec, and those are really helping us make psychedelic noises. We love the warm earthy tones of analogue synths and their filters - the Moog LP and the Korg MS20, for example. And we love the scratchy, eerie mellotron too - especially the flutes and strings. We like to use reverb to create textures and ambience within the context of songs.


Q: Tell us about the process of recording the songs ?
A. Writing and recording varies so much. A song can come from a jam with the four of us in a rehearsal space. Or it could come from a single vocal line that Jeannie's had; or it could be one or two of us sitting in the front room with an acoustic guitar and a Farfisa organ. Sometimes we'll have fragments of songs kicking around for months, and we'll have to wait until another fragment comes along that just seems to join up with it naturally.

Recording can be difficult. Ideally we'd love to really capture our live sound with clarity and power, but we don't have the resources to spend hundreds of pounds in recording studios, so we try to make sure that the drum sound is as good as it can be in the rehearsal space; that's the foundation, if the drums sound good you're halfway there. We like to mic up the guitars so they've got natural space. The keyboard sounds are usually DI'd or through effects. We just use Logic, laptops and audio interfaces. We're aiming to combine the best of both worlds: the alchemy that seems to come from live performance, and the precision and clarity that comes from digital editing and processing.

Q. Which new bands do you recommend?
A. Some interesting contemporary albums we've heard recently are by Jane Weaver, Gwenno, Cavern of Anti-Matter, Goat. Bands that we have played with recently and really liked are Wild Birds Of Britain, Dusst, Creatures, Jellyskin, Team Picture and Unstable Journey.

Q: Which band would you love to make a cover version of?
A. We have such a backlog of original songs we haven't attempted a cover as yet. Some songs that we would like to try are Break On Through, the Doors and Venus In Furs, Velvets.

Q: What are your plans for the future?
A. We've nearly finished a video for a new song, 'Air Warning', which explores unease about the current state of politics and the renewed fear about nuclear war -That will be up on our YouTube channel very soon. We hope to get a big enough following to put on our own gigs and incorporate original light show/projections/trippy visuals that interact and inspire as we play, making each gig a unique experience/journey.

Q: Any parting words?
A. Great blog you have here. Thanks for your interest in Dream Demolition Factory. All our best wishes to readers of TBTCI.
*
*
*
Thanks