Enigma with VIM - An Interview 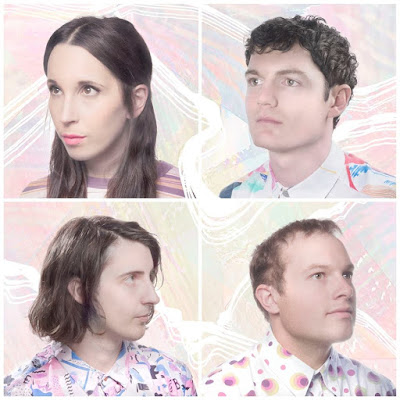 Q. When did VIM start? Tell us about the history...
N: VIM started about a year ago but we had all jammed together a bit previously. I started writing a bunch of songs and sharing them with my friends and then we just started learning them and eventually all writing and adding to them together.

M: We’ve only been playing live since late January this year.

Q: Who are your influences?
M: I think we’re largely influenced by a lot of the bands from the Melbourne scene, not sonically but in terms of their outputs and approaches to making music. I think sonically a lot of our influence comes from a range of genres, probably most notably dream pop, post-punk and krautrock.

N: We’re probably influenced by a heap of different bands; sometimes it doesn’t become obvious until after writing something and realising it has a similar vibe to things we’re listening to.

Q. How do you feel playing live?
N: We’ve only played a few shows so it’s still all new and scary but they’ve all been really fun so far. Before playing our first show I remember my biggest fear being that the sound guy wouldn’t let me have enough reverb on my vocals but it was totally fine haha.

Q. How do you describe VIM’s sound?
N: It depends on the song, I get inspired by bands like DIIV and Beach Fossils and layering melodic guitar riffs but sometimes songs end up being a bit moodier.

M: I think a lot of our songs have a somewhat nostalgic sound, it’s probably somewhat induced by the reverb soaked guitar melodies and the washed out vocals.


Q: Tell us about the process of recording the songs ?
M: All the demo recordings currently up were completely recorded by Nat upstairs in our spare bedroom. We recently spent a weekend in Barwon Heads with Jack Crook (from Contrast) recording what will hopefully become an EP.

N: It was super fun and chilled but we managed to record way more songs than we were expecting. We’re hoping to put it out on cassette in a few months. You should buy it.

Q. Which new bands do you recommend?
N: We’re just going to interpret this as bands from Melbourne because we are so lucky to have so many friends here who are writing amazing music.

N: Also today at work I shazamed a song on the radio by a band called ORION from Sydney. It was so good and they’re conveniently playing a show in Melbourne on Friday so I’ll definitely be checking that out.

Q: Which band would you love to make a cover version of?
N: I really want to do a cover of Fingertips by The Brian Jonestown Massacre but I’m also kinda scared I’ll ruin it. Maybe one day.

M: Nat has heaps of great covers already on her Soundcloud. There are heaps of bands that I’d love to cover that it’s kind of hard to choose just one. I really like covers that take the original in a new and somewhat unexpected direction. I think it would be great to do a Rowland S Howard cover, he has so many great covers he has released that I think it would be a fitting homage.

Q: What are your plans for the future?
M: Hopefully we’ll finish mixing the EP and be able to get it out. I think we’re aiming to release it around July. We’ll hopefully get to play quite a few more gigs. There’s one coming up on the 10th of June that we’re really excited for but I’m not sure if I can say any more than that. Would be great to play some shows elsewhere around Australia too.

N: We have a VIM jar in our lounge room. We would like to add to that jar some more and make more music, would be cool to one day release something on vinyl.

Q: Any parting words?
M: Thanks for listening to our music!
*
*
*
Thanks