Genevieve with Too Young To Go Steady - An Interview 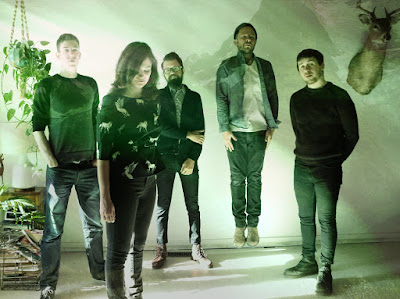 Q. When did Too Young To Go Steady start? Tell us about the history...
Mike, Carlos and Chris met through Craigslist in April 2016. We all wrote music independently but there was a clear overlap with shoegaze and indie elements. We started with jam/writing sessions in Mike's crammed music room and playing to a drum machine, but it quickly became apparent that we were all on the same page and were producing amazing sounds. After finishing Twelve and Genevieve instrumentally we began looking for a singer through Craigslist, where Susan immediately took to the music. The lyrics and vocal melody that Susan brought to her first tryout for Genevieve have remained virtually unchanged, so there was an immediate fit. Everything came together surprising quickly from there. We had worked with a few different drummers, but Fabian fit in very quickly and demonstrated a great feel for the style....he nailed our first show after only playing with us about four times. In short, this is turning out to be an unlikely Craigslist success story.

Q: Who are your influences?
This varies member to member. The most common influences include modern dreampop outfits like Wild Nothing and Diiv, but oddly everything we create seems to have an 80's tinge to it. Certain influences such as Slowdive, MBV, and to an extent Broken Social Scene can be felt.

Q. Make a list of 5 albums of all time…
This changes all the time and also varies by member to member......but according to Chris it is:

Q. How do you feel playing live?
We played our first show in mid-January. It felt good. Our second show was recorded and one of the songs can be viewed at the link below. We are playing our fourth at Silver Dollar in Toronto on April 22 where we are looking forward to debuting several new songs.

Q. How do you describe Too Young To Go Steady sounds?
Spacey, delay/reverb-laden sounds that vary between slow and beautiful to driving and intense. Somehow everything we write seems to spark a bit of 80's nostalgia, even though some of our members weren't alive in the 80's.

Q: Tell us about the process of recording the songs ?
We are planning to issue a five song EP hopefully in 2017. We can answer this question properly once everything is finished; we are still figuring out a method to the madness.

Q. Which new bands do you recommend?
Fake Palms, You'll Never Get to Heaven, Beliefs, Elsa

Q: Which band would you love to made a cover version of?
We are already doing this and loving it. Some of our members covered You Forgot it in People by Broken Social Scene in February featuring several talented guests, and will hopefully do so again in the future.

Q: What are your plans for the future?
Write, release, repeat.
*
*
*
Thanks