Bang Up To Date With The Popinjays - An Interview 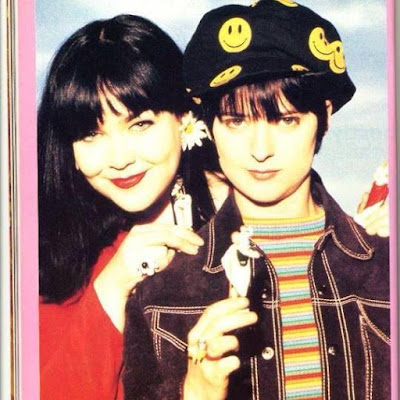 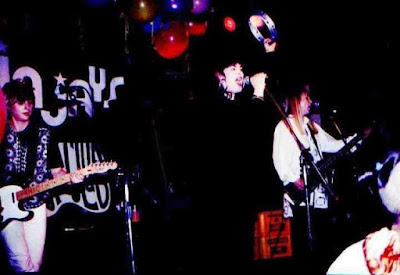 Q. When did you begin to get interested in music?
Music has always been big in my life but probably from the age of about 13 or 14, when Punk had just happened in the U.K. The message was that anyone could do it, and because I had not had any training in music or learned a musical instrument that was the kind of thing I needed to hear!

Q. When did the Popinjays start? Tell us a story …
I moved to London from the north of England the moment I left school at the age of 18. I knew nothing would happen in the small town I grew up in, and all the bands I loved seemed to come from London or play all the time there so there was no question that I had to get there somehow. When I arrived I didn't know a single soul so put an advert in a music paper seeking musicians to form a band. Polly's friend (a drummer) answered the ad and Polly came along with him just for something to do. I didn't like her at all when we first met! I thought she was pretty snooty and unfriendly. Then a week or so later she called and asked to meet...I was really surprised! After that we became best friends almost immediately and The Popinjays were born. We were a teeny tiny bit Goth in the beginning, and compared to the Cocteau Twins because of our use of backing tracks on stage!

Q. What´s your influences?
For me, bands like The Chameleons, Cocteau Twins, Sugarcubes and guitar based songwriters like Nick Drake. Polly was all about The Beach Boys, Blondie, and guitar based power pop. There weren't many all girl bands around, well none that we admired or were influenced by.

Q. Make a list of 5 albums of all time…
Pet Sounds by The Beach Boys would be the only album we would agree on. Apart from that. I'll take Treasure by the Cocteau Twins, Script of the Bridge by The Chameleons.

Polly would chose Lincoln by They Might be Giants, and Everybody is Fantastic by Microdisney. In fact Cathal, the singer in Microdisney later became a friend and it is his voice shouting in the middle of our song Vote Elvis. And we also became friends with the Chameleons too. Mark Burgess used to say at our flat in London and do acoustic versions of his songs for me all night long. It was totally heaven.

Q. Back to 1989, I remembered when NME reported that Popinjays along many others great bands like Power of Dreams, Charlatans, etc were pick the “Stars of Tomorrow”, How was the scene at the time?
It was very interesting but mostly noisy boy bands! We ran a gig venue called The Pop Club at the Bull & Gate in London's Kentish Town. It was high on the circuit of places to play if you wanted to be seen by record companies and music journalists. We had the most fantastic time, either gigging, touring or recording ourselves and the rest of the time running a hip and cool venue!

Q. How were the shows at that time?
We did loads and loads of gigs...touring for weeks at a time, so much so that I often lost my voice and would have to make emergency trips to see a doctor between shows. It wasn't so much the singing that caused me to lose my voice, but the shouting and staying up all night after the show! When we started out it was just me and Polly and a tape recorder, by the end we had a live bass player and drummer. We grew up eventually to be a 'proper' band!

Q. What are your favourite Popinjays record/song?
Polly loves Vote Elvis. And my favourite is When I Believed in You. Especially the French language version. Which you won't ever have heard...but will soon!!!!!

Q. Tell us about that magical tour with Kitchens of Distinction? Some curious stories?
That was our first tour ever. We had recently signed to One Little Indian and were therefore label mates. Derek (founder of OLI) got both band together in his office and told us we had better make friends because he was sending us off on a 2 week tour of the UK. And literally we travelled from the far North of Scotland to the far south of England, playing gigs everywhere in between. We all got on famously, the best 2 weeks of our lives up to that point. Steve Lamacq, who was then a journalist for the NME came on some of the tour with us, squashed into the tour bus, and started a rumour that the 3 Popinjays married the 3 Kitchens in Gretna Green (a town in Scotland where you don't need a licence to get married!) ...the last night of the tour was in Brighton, and my birthday. We were all so happy and I had consumed rather too much champagne which resulted in me losing my shoes on the beach after the gig. The Kitchens wrote the song 'Under the Sky, Inside the Sea' about that night.


Q. Tell us about your projects after the end of Popinjays?
Polly and I remained best friends even after we decided to stop being Popinjays. Neither of us did anything musical for over 20 years. Just before the Popinjays ended we got most of our gear stolen from our tour managers garage, so we didn't have much to play on anyway. Polly became a press photographer and I trained as a child psychologist. We had no intention to reform The Popinjays but when a fan, Grant Holby, tracked us down and asked us to do a reunion gig for an indie festival he was running in London in 2015 with lots of band we loved, we decided to go for it. We were amazed at the response and meeting so many lovely people who had great stories to tell us about Popinjays gigs from the past. One such 'super fan' was there all the way from San Francisco, and when he and I met we formed an immediate connection. It was Dave Han from Shoegaze band Astral and together we created Moth to the Flame and released our first dream pop vinyl in 2016. Magical.

Q. The Popinjays are active again - what is the motive for the return?
We loved playing live together again, and decided we would do a few more special gigs when the right things came along. Really the motive is to enjoy it in a way that is quite hard the first time round when you're younger and it means so much and everything gets super serious and all about the business and not so much about the music. This time it's just good enjoy it, to live in the moment and enjoy the sheer pleasure of playing live.

Q. What are your plans for the future?
We discovered almost an album worth of unreleased, and mostly forgotten songs while prepping for the reunion gigs, and after talking to Derek at One Little Indian (for the first time in 22 years) he suggested we release it, along with a box set of all the back catalogue! So we're working on getting all that together at the moment, with some gigs to go with it. 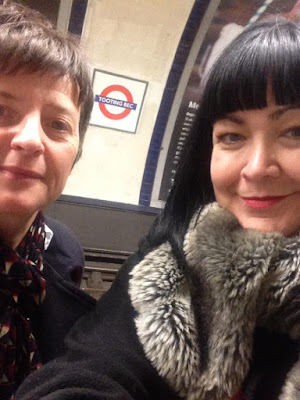