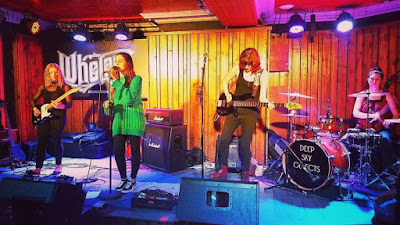 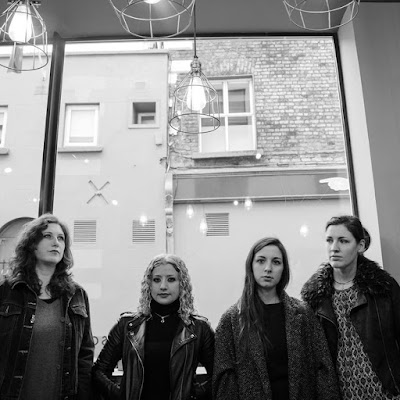 Q. When did Montauk Hotel start? Tell us about the history...
Aoife: Myself and Shell played in a band together a few years back. We met up again some time later to form another band. We found Claudia through a friend on Facebook and Karima plays in another band with me and agreed to come in to try out for the drums. The rest is history!

Shell: After our first band finished, me and Aoife eventually met up to jam and write songs… But it was just the two of us jamming with guitar and bass for months. Though we wrote the bones of our first single Black Dress during this time! We went on the hunt for a singer and when we found Claudia it just fit so perfectly. Karima had taken a few drum lessons a few years back and we asked her to play with us... And we wouldn’t let her leave!

Claudia: Basically, Karima was bullied into playing drums for us!

Q: Who are your influences?
Aoife: I think a mixture of 80s and 90s jangly indie pop. We often get compared to The Smiths, The Cure and The Pretenders and these would all be good influences of ours!

Shell: The Smiths were a massive early influence on us but as we have written more songs our influences list keeps growing! We all have such broad tastes in music and genres that have influenced our individual styles of playing and writing so we have brought all of these influences together! My own personal influences would be guitarists who have a strong sense of melody evident in their playing and a strong sense of tone and use of effects, such as Johnny Marr, George Harrison, Graham Coxon, The Edge and Jeff Buckley.

Q. Make a list of 5 albums of all time…
Aoife: Phil Lynott is a hero of mine so I’m going to go with Thin Lizzy – Live and Dangerous.

Shell: I’m going to pick The Queen is Dead by The Smiths. This album influenced everything about my style of guitar playing! As a band, we will pick The Joshua Tree by U2 as the fifth album – U2 are an influence on our sound and this cover inspired our own E.P. cover too!


Q. How do you feel playing live?
Aoife: EXCITED

Claudia: Playing live is always a pleasure because you get the chance to open up whatever happens during the hours of practice in your tiny rehearsing room and show it to the world. When we first started playing live it was very thrilling to play for people who didn’t know us at all and see what reactions they would get from our music. And so far it's been good reactions!

Then again, it feels very natural because we are all such good friends and being on stage feels like home somehow! A very comfortable, safe, fun and untouchable place.

Karima: It's a really nice feeling to share our music with an audience.

Shell: We are all happiest when we are playing live. The big challenge at the start was getting our sound right live so that our style was heard the way we had crafted it in our practice room. This was a big focus when we first start playing live and it’s something we have down now!

Q. How do you describe Montauk Hotel sounds?
Claudia: We have a very simple set up with just one guitar, bass drums and vocals, but it's very characteristic and quite recognizable even though we're quite a new band. I would describe the overall sound as jangly, shimmery, with plenty of chorus and reverbs. We like simple things made well!

Shell: I think the main thing when we started was that we wanted to write simple songs with clever use of melody and effects. My pedal board has been put together specifically for the Montauk Hotel sound! We want plenty of shimmer backing up Claudia’s melodies so to help create this I have two reverb pedals, a chorus (which is always on!), tremolo, delay and a flange (just in case!). Aoife’s bass lines really carry a lot of the songs filling the role of rhythm guitar as well as bass. I think Karima is our secret weapon though – her beats are so well planned out and she always knows what will suit each section of the song.

Q: Tell us about the process of recording the songs?
Shell: We were lucky to have our brilliant engineer Gary White to guide us through recording our first E.P. In short, we started with drums for each song and then bass. We recorded the main guitar tracks next and then the overdubs. Claudia did all her vocals in a separate recording session once we had a basic mix of the music for her to sing with.

Q. Which new bands do you recommend?
All Tvvins
Beauty Sleep
Overhead The Albatross
Farah Elle

Q: Which band would you love to made a cover version of?
Claudia: We often think it would be fun to adapt one of the real 80s classics that would be quite far from our genre and turn it into our own style – just to see what happens!

We haven't had the time to do work on any cover versions though. We actually found it harder to try and prepare a cover than actually sit down and write our own music because that happens really naturally.

Q: What are your plans for the future?
Shell: We’ve just released our first E.P. with a sold out show in Whelans – one of our favourite venues in Dublin. Our next few gigs will be focusing on the E.P. but we will be recording a new single in the Summer and we will be playing a few festivals too!