Shadower with Sooner - An Interview 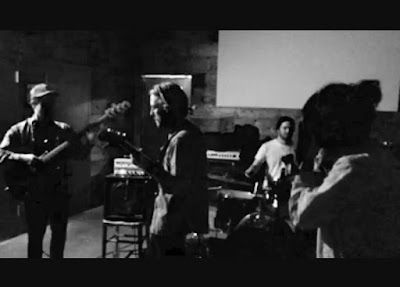 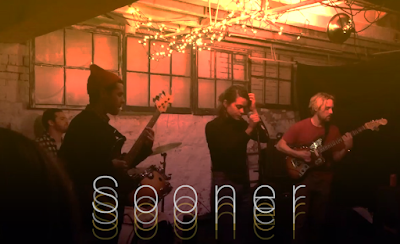 Q. When did Sooner start? Tell us about the history...
John: I moved from SF to Brooklyn in Spring 2015 and started writing songs on guitar without a band, but I lived with Tom (drums), who would hear the songs from my room. When we decided to finally "jam" almost a year later, Tom knew the songs already it clicked right away. We slowly searched for others and finally got our friend Ehren on bass, but eventually we had to post a Wanted Ad on Craigslist for a singer. Federica responded and was the only one we had to "try out" because she was far better than anyone I could have imagined. Ehren & Fede learned the songs and wrote their parts super quick, so we had about 10 songs within a couple months and played our first show in December.

Tom: Siouxsie & The Banshees - Juju, Sundays - Reading, Writing & Arithmetic, The Who - The Who Sell Out, Pavement - Slanted & Enchanted, Yo La Tengo - I Can Hear The Heart Beating As One

Q. How do you feel playing live?
Tom: a weird mix of "shit, shit, don't fuck this next part up or you'll ruin everything" and total elation and gratitude just to have an opportunity to perform. We also have great friends who have come to our few shows to support us, which is huge.

John: Sometimes I dread it because I get nervous, but there’s also a lot of excitement and adrenaline too. Ultimately I love it and always want more – there's nothing better than when you get past the nerves and reach a spot of total non-thinking immersion, and all the normal nagging anxiety in your brain dissolves.

Q. How do you describe Sooner sounds?
John: The hardest question – trying to avoid “genre” terms, I find it somewhere in the realm of pretty/kinda sad/kind of hopeful/some bursts of fuzzy aggression.


Q. Tell us about the process of recording the songs?
John: I wanted to do it in a real studio since I never got great quality in my attempts at home recording, and our friend Damon at Rad Studio gave us a really good deal for one full-day session. We argued for a week about which of our songs to record, practiced a bunch, and then woke up to a cancelled session because the studio flooded that night.

A month later we came back and tracked everything in a day – playing together but isolated. Then we did a couple more short sessions to layer and mix/master. Damon was super patient, and made so many tweaks with our annoying feedback – I think it turned out great.

Q. Which new bands do you recommend?
What counts as new? Let's say formed within 5 yrs and still active today…

Tom: Personally I'd love to start a Grateful Dead cover band but that obviously has nothing to do with Sooner. I don't really see Sooner playing covers, but if we did I'm sure it would be something like a Cocteau Twins song or something equally classic from the dream pop arena.

John: I never think about doing covers, but if we did I’d probably want it to be a really different interpretation of the original. Actually it’d be sick to do something like a classical impressionist piece - DeBussy or Satie probably.

Federica: Ohohoh I forgot The Smiths, I wouldn’t mind covering them!

Q. What are your plans for the future?
Really simple – play more shows, record more of our songs, keep writing new ones.