Slow Meadow with videodays - an Interview 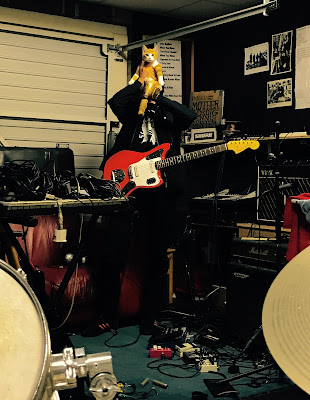 
Q. When did videodays start? Tell us about the history...
A. videodays is a solo project, the name is a skateboarding reference, some may know this. The first bandcamp 'release' really marks when it started, that was 2015 and those songs you can hear are total rough sketches, basically just experiments. I've been doing music for a long time, different styles and approaches. It's always been part of my life. Trying to push it a bit more recently though.

Q: Who are your influences?
A. Influences at the moment include, William Eggleston's photographs and Kit Williams' visionary approach to art; his way of living in his own world is inspiring. Top top humans.

I listen to a lot of music and it will always influence me, but It's hard to pin down specific artists even if there are glimpses of them in my music. I just love music it's all so good!

Q. Make a list of 5 albums of all time…
A. Without naming the obvious ones (everyone knows the 'big two').

Q. How do you feel playing live?
A. Easy answer, I don't play live, but if I did then I'm sure it'd be an overly complicated set up for a fairly loud and basic sound. Saying that, once a band I was in played a house party. We lasted about 5 minutes before someone pulled the plug. We were awful, shouts to MPPH.


Q. How do you describe videodays sounds?
A. Static snow with pink and blue hidden deep in the mix.

Q: Tell us about the process of recording the songs ?
A. Ok, bit long this one. I'll mess around on acoustic guitar and watch tv to find some chord progression (I have no technique and need to improve on the guitar). I'll use a drum machine to set a tempo. Then it's a case of trying effects and playing around with the sound. I think that i consider music quite visually / mentally, it's all shapes colours and feelings. Like Kev said it's like cigarette smoke, once it's out in the air you can swirl it around and manipulate it. I'll play guitar and split the signal through 2 amps, this lets me mix tones in a specific way. So on a recording there will generally only be one actual guitar track even if it might sound like more. Then I'll do a guide track for the structure. Then back to the drums, often it's just drum machine, but I'll also record and loop up live drums. Then add a bass line, pretty much rely on doing bass direct in, but learning to work with recording bass better. Then back to guitars to do a proper 'take'. So it's like a cyclical thing, do it and re-do it. This all happens in my garage, the drum kit is the worst sounding thing in the world, might as well be a saucepan and a pringles tube so I have to do a bit of production on the drums. I try to go easy on using EQ and stuff on the guitars, I'd like the sound I'm playing to be as close as possible to the resulting recording. The 'slow meadow' song is the first time I've recorded my own voice, so I have nothing to say (yet) on recording vocals apart from to saturate them beyond belief. Final word is that I always change my approach so it's like experimenting every time. Fun. Sorry this is a really long answer.

Q. Which new bands do you recommend?
A. I love everything that 'Orchid Tapes' put out, great label great music (I love you OT!) especially Fog Lake & Home Alone. In terms of 'Gazey' bands, at the moment I'm listening to: Gosh!, Soda Lillies, Jaguwar, Big Hush, Broken Water. Got to mention Pink Playground as well as Moonbeams/Lavender Blush..... oh lord there's so many out there it's amazing, gaze for days

Q: Which band would you love to made a cover version of?
A. At the moment I'm doing my first ever cover and it's an interesting process. I'm doing a VU&Nico song and it is currently sounding nothing at all like the original. This is for a compilation with some other musicians from a Facebook group 'we're sad and listen to loveless every night'. This might be a good place to shout out the group (particularly Ian for getting it together) and the compilation we recently did (it's on bandcamp, look it up) there's some great songs on there. Nice to have a few collective projects going on.

Q: What are your plans for the future?
A. Trying out more recording techniques, speeding up my working process and hopefully do a little cassette release at some point with some nice artwork. Buying gear.

Q: Any parting words?
A. Try to project your heart's magnetic field when you can and listen to Spacemen 3.

Thanks to Georgia, Chudgie and you Renato.
*
*
*
Thanks