Aura 6 with Spiral Vortex - An Interview 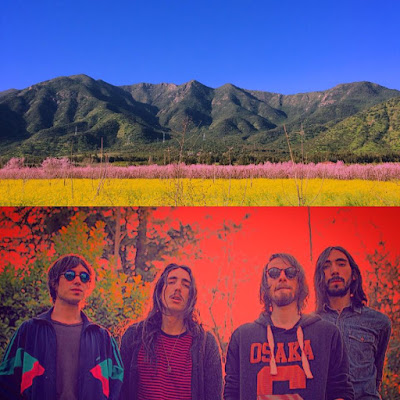 
Q. Hello guys, first congratulations on the new album, it's really brilliant, what is your analysis after conclusion of album? Are you happy with the result?
1. We are happy with the results, we love that the album maintains the same aesthetic from start to end, it's one of the main things we wanted to achieve.

Q. How was the process of creating Aura 6?
2. The process was long, a lot of songs where composed on acoustic guitar and then mutated along the year until they where mostly synths and very different, then we recorded those songs trying to capture the band energy, after the studio we took our time mixing the album, there is a lot of post production involved, it was a fun process.

Q. What are the main differences between Aura 6 from your early records?
3. The main difference would be that this time we were concentrated on making interesting sound textures and not on complexity in composition or structure, we wanted to simplify things and make a coherent album, we wanted to make and album that had the right mix of electro and rock.

Q. What were the influences for creating the new album?
4. there are many influences, just to name a few, Aphex Twin, Boards of Canada, Simian Mobile Disco, Com Truise, Nosaj Thing, John Carpenter...it's kind of what we were listening to the year we made the album, also bands like Dungen, Unknown Mortal Orchestra, Ariel Pink, Connan Mockasin, Air, are bands that have inspired us a lot lately.