Your Bliss​ with Bugjar - An Interview 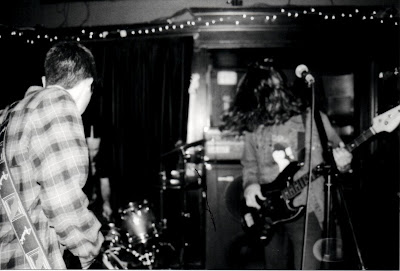 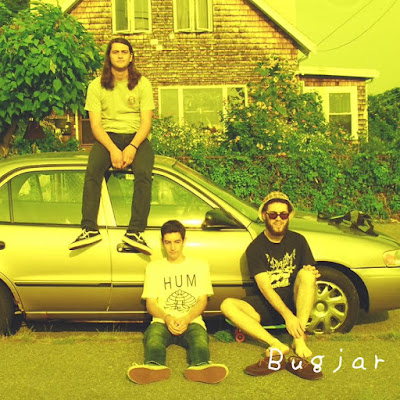 Q. When did Bugjar start? Tell us about the history...
Bugjar had a few "starts" I guess you could say. I (Mark Hajjar) and my friend Mark Bambrick ("bambi" for short) were sitting in our jazz/rock ensemble at Quincy High School during my senior year in the fall of 2014 when we were assigned a project to write an original piece of music; at the same time I had been jamming with my other friend Jim Farnham (drums) and we had one original that we didn't really plan on doing anything with. When Bambi and I got to work on our project I remember mentioning to him the other stuff that Jim and I had been working on and that we should possibly get together to jam sometime. Thus we combined forces andBugjar (which wouldn't be actually named "bugjar" until months later) was formed a few weeks later with me on bass, some guitar and vocals, Bambi on lead guitar, and Jim on drums. Our first practice was in Jim's hot and sweaty room using small combo amps and an electric drum kit. We went on to record our first release a few months later in the summer of 2015. A very amateur and sort of choppy release (which I have honestly come to dislike) our first piece of music, with some singles, was released in the fall and winter of 2015. At the time our influences and levels of musicianship were really all over the place and we were just learning how to be song/sound writers. Following our first release, with college and new friends and some changes in taste, Bugjar took a short time off. After taking some time to settle into our new lives and get our new ideas and influences together we finally recorded two new originals "Your Bliss" and "Harakiri" with our friend Pat Madigan on bass and me on guitar full time. Bugjar, which was a three piece, is now a four piece and better than ever.

Q: Who are your influences?
This is one of those questions that I think the answering is going to keep changing as time goes on. If we had been asked this when first starting the band I think overall we would have agreed that Weezer and Dinosaur Jr. were our main influences at the time. That being said some bands that we took influence from during Bugjar's inception that still effect our sound are bands like Hum, The Smashing pumpkins, My Bloody Valentine, and Failure. On top of these bands which have been with us since the beginning, we as a whole have been gearing more toward the Art rock/shoegaze/avant-garde sounds of bands like Swirlies, The Drop Nineteens, Starflyer 59, Sonic Youth, and Medicine.

Q. Make a list of 5 albums of all time…
This is also one of those questions that's going to be hard to answer, especially with it always changing, but I think the overall top 5 albums for us to choose with Bugjar in mind are as follows (in no particular order):


Q. How do you feel playing live?
Playing live for us is always sort of a special occasion which depending on the venue and crowd can go over really well, or not so great. We tend to play really loud and are constantly changing our setlist live so that every show we play is a little different. Especially lately with a new lineup, more bodies on stage, and more amps on stage, the live performances have been filled a lot more with sound and energy which is the way we like it. There have been times, not recently, but in the past when our set has been cut short or we've been told to turn down which is usually one of those times that isn't great haha. But every now and then we play a really great venue with a good crowd that is into our sound and we can play as loud as we want and really let the energy blend and our sound melts into a full blown experience, it's really great.

Q. How do you describe Bugjar's sound?
I would say Bugjar definitely fits a genre (shoegaze/artrock/grunge/alternative), but I would also say we're always changing, always trying out new sounds and new styles. We try to put a new face onto an old genre of music, exploring the boundaries and pushing them just enough and sometimes too much, however we feel sounds best really.

Q: Tell us about the process of recording the songs ?
As far as recording goes we've always been fighting really with sounding our best on recording but I think we've finally settled into a process that fits us perfectly. With our first release we payed a lot of money and were unhappy with the final product. We've definitely learned from that horrible experience and are not going to screw up like that again. With our most recent singles that we've put out (both of which were recorded for free) the process went really well for both. "Your Bliss" was recorded with an engineer named Chris McLaughlin at the converse rubber tracks studio here in Boston which was a really great experience because it allowed us to work in a professional studio with professional sound engineers for completely free, and the recording definitely shows for it. "Harakiri" was recorded using a style that we're going to record most of the rest of our material, at least with our upcoming releases, in home, with one of our members Pat Madigan engineering. This, in my opinion, is the best way a modern band can really create music, having complete creative control over their sound. Being able to do quite literally whatever you want with your music is a must. This way also allowed me to screw up as much as possible when I was recording the guitars/bass/vocals and try some new techniques out on the spot which I think really helped for me to get the best sound I wanted on the track.

Q. Which new bands do you recommend?
As far as new bands, the list goes on really. If you ask me I say keep checking up on the small time blogs like this one, the when the sun hits blog, and the dkfm blog where new bands are being featured every week and you can really find anything that you're looking for. Some newer bands though I'd say I've been listening to are ones like You're Jovian, My Dead Girlfriend, The White Tulips, and Soft Spot from Halifax NS. If you ask Bambi I'm sure he would say something like he's been listening to a lot of Cloakroom or Windhand. Jim would most likely say something like Trip hammer & the water wheel or Feels, and Pat would probably say something like Tame impala, Morgan delt, Courtney Barnett, or Pond. It's hard because most of us hangout all the time but we listen to so much stuff new and old. I'm sure we'd all agree on recommending everything Ty Segall has ever been involved with, the new slowdive, a really great new psych/doom band called Gluon which we had the pleasure of doing a split with, and a garage band named Bruvs that we play with a lot of the time.


Q: Which band would you love to make a cover version of?
We've done covers here and there for fun by bands like weezer, blur, and dino j, but we've been considering covering some older songs by cream or the beatles and putting them on a release. As long as we sort of take them and make them our own, giving them an overall Bugjar feel. But it would have to something older, something almost completely different from our sound, so we really have a lot to work with. Maybe there will be a few on something in the near future...

Q: What are your plans for the future?
Recording, Recording, Recording. We plan to put out as much music as possible this summer, a possible big LP and then maybe an EP or two here or there, we'll really have to figure it all out once the stuff is recorded, but we have 10 or 11 songs in the works already and more to come, trying to get as experimental as possible.

Q: Any parting words?
Thanks again, it's been fun, be on the lookout for more music, keep on rocking while you still can
*
*
*
Thanks