Getting Frequent Now with Antipole - An Interview 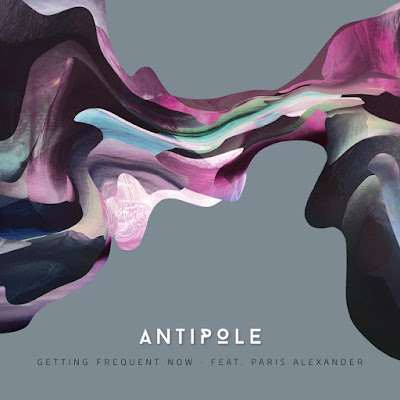 Q. When did Antipole start? Tell us about the history...
Karl: Me and Anne-Christel met during summer 2013 and got together as a couple by the end of that year. During that autumn she introduced and re-introduced a lot of old and current post-punk / minimal wave / coldwave bands to me. I've been writing songs in bands before and was inspired to start writing and record more music. By late 2014 8 of these songs were released as an instrumental album "Panoply - Songs for AC". By now 68 Antipole demos/songs have been recorded. The first 2 years we did everything ourselves. Lately we've involved singers. Like Camilla Sombrio (Brazil),
Mats Davidsen (Norway), Alain of L'ordre d'Héloïse (France) and Paris Alexander (UK). Paris Alexander produced our most recent album, Getting Frequent Now, in addition to doing vocals. We're really happy with the results. The stuff we've done with L'ordre d'Héloïse lends more towards coldwave while the song with Camilla more towards etheral music.

Q: Who are your influences?
Karl: Older bands like Chameleons, Joy Division, early New Order and of course The Cure. But also contemporary bands like Motorama, Mode Moderne, The KVB and The Agnes Circle.

Q. Make a list of 5 albums of all time
Karl: Impossible to decide on such lists, but here are 5 albums we love.
1. The Cure - Disintegration
2. Guided By Voices - Bee Thousand
3. Joy Division - Unknown Pleasures
4. Chameleons - Script Of The Bridge
5. Interpol - Turn On The Bright Lights

Q. How do you feel playing live?
Karl: Love it. Although Antipole is not playing live at the moment since the people involved are spread all around the world. We hope to do performances later.


Q: Tell us about the process of recording the songs ?
Karl: Most of the time it happens instantly and I can have a song done in 15 minutes. A melody can appear when watching TV or driving car or when listening to some other music. Once it's done I send the bass and guitar, and occasionally synth, tracks to Paris Alexander who records synths, rhytm and vocals and produces the song. Then we'll do some adjustments sending the song back and forth since Paris is in Brighton UK and We are in Trondheim Norway.

Q: Which band would you love to made a cover version of?
Karl: We've done quite a few cover versions. We did Insight of Joy Division, Imprimees sur nos mains by L'Ordre d'Héloïse and Instance Of Resistance by One Man Standing. We just did a version of Crazy For You by Slowdive, not released yet. We do songs we really love and we think we can add an Antipole-ish twist to.

Q: What are your plans for the future?
Karl: Continue writing and recording songs. We're collaborating with Paris Alexander recording our next album scheduled for winter 2019. 5 songs are already done, will be on Unknown Pleasures Records.

Q: Any parting words?
Thanks for having us. There are so many great bands out there in the underground releasing
really good music. Look for it!

Cheers Karl and Anne-Christel
*
*
*
Thanks