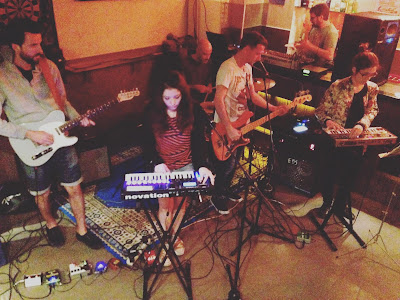 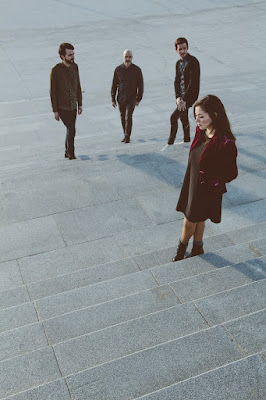 Q. When did Arista Fiera start? Tell us about the history...
It all began about three years ago, when Juan (bass player), Gorka (Guitar player), Juanjo (synth player) and Kike (drummer) joined and started to create the structures, rhythms and music in the studio of the songs which would become our first album "Simetría Par". One year later Isabel joined the band, and gave the voice to all the songs and also contributed with a synth sound that fitted 100% with the instrumental music we had. Since that moment the seed of what Arista Fiera is today was created. Juanjo left the band a few months before we recorded our first album and three months ago Lucia, who also plays keyboards and synths joined the band.

Q: Who are your influences?
We are five people in the band, and we listen to a lot of different music styles, but we have common influences who are very important in our music. If we think in classic bands we love all the shoegaze pioneers like My bloody Valentine, Jesus and Mary Chain, Slowdive... etc or bands like Joy Division, Sonic Youth, Teenage Fanclub... etc. Thinking in contemporary bands we like bands like Foals, DIIV, M83, Beach House, The Horrors, Sigur Ros, Postal Service, MGMT, Metronomy, The XX...etc. From spanish scene we love Los Planetas, Triángulo de Amor Bizarro, Havalina, Linda Guilala, Apartamentos Acapulco, el Columpio Asesino...etc

Q. Make a list of 5 albums of all time…
Loveless - My Bloody Valentine
Psychocandy - Jesus and Mary Chain
Leisure - Blur
The Piper at the gates of dawn - Pink Floyd
Revolver - The Beatles

Q. How do you feel playing live?
We love playing live because it is the best way to express ourselves as a band. The strength transmitted on stage is fundamental for us and for our evolution as a band, for our own sound. The reaction from the audience is the best reward after months of work at the studio.

Q. How do you describe Arista Fiera sounds?
Textures, layers and atmospheres over a solid and compact rhythmic base. There are intense and overwhelming moments which mix with other calmed and peaceful ones. The contrast between Isabel's vocals and the instrumental base forcefulness is very important in our sound.


Q: Tell us about the process of recording the songs ?
We recorded "Simetría Par" during the 2016 spring in Granada, at the recording studio "Producciones Peligrosas", with Carlos Díaz as engineer and producer. It was a great experience working with him because he knew how to get the sound we had in our minds and even improve it a lot, with synths and guitar arrangements, and light changes at certain passages of several songs that have contributed to make the album more compact and tight. The studio had an incredible collection of analogic synths and keyboards as well as vintage guitars and amps. All of these things have been decisive in the final sound of the album. We were locked in the studio for a few days recording the seven songs of the album, we were arriving early in the morning and we were leaving at night. Inside the studio there weren't any kind of windows or natural lighting so sometimes we didn't know if it was day or night, a little bit of a psychodelic experience... It was hard work but we are very happy with the result and the final sound.

Q. Which new bands do you recommend?
"Title fight", they are not precisely new on the music scene, they entered into shoegaze two years ago. Their album "Hyperview" is a great inspiration for us.

Q: Which band would you love to made a cover version of?
Los Planetas, for example, is one of the bands who have marked all of us since our adolescence. In fact, we have just been recording a version of one of their songs, "La playa", for a tribute celebrating the 25th anniversary of the band.

Q: What are your plans for the future?
Right now we are focused on the release of our album on may the 15th, promo work and the next concerts. We will play in a festival this summer, maybe more than one, and from next september we will be playing concerts in Andalucia and in the rest of Spain. We are very excited with the idea of showing our music and playing with other related bands.

Q: Any parting words?
Many thanks to TBTCI for counting on us for this interview. As fans of this web we are so proud to appear here and talk about our work.
*
*
*
Thanks