Sun And Skyway with Bellavista - An Interview 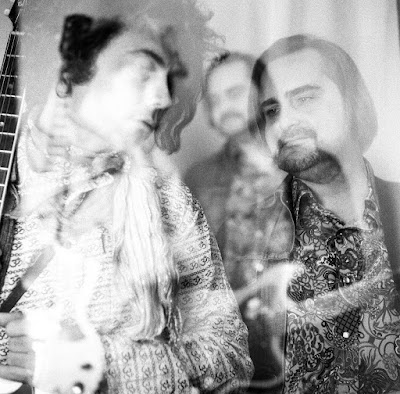 Q. When did Bellavista start? Tell us about the history...
Bellavista started in 2005 with me, Jeremy & Cary after our band Vue broke up. We really liked the idea of having a small three piece band with a huge sound. I was already heavily into my Roland RE301 Chorus Echo and various vintage fender amps, having a stripped down lineup seemed the perfect thing to showcase huge guitars, reverberated electric fuzz bass and distorted drums.

Q: Who are your influences?
We come from a hardcore punk background and even though aesthetically our music is much different, I think growing up with that has had the biggest impact on the way we approach making music. We're also influenced by the small coast side towns we grew up in and the fog, beach and ocean in general.

idk - it's hard to make lists but those just came to mind...

Q. How do you feel playing live?
It's the best when we connect with people and really share something emotional with the melodies and rhythms.

Q. How do you describe Bellavista sounds?
I think we're a pretty intense and mysterious band with hopefully enough melody to tell a story that needs to be told.


Q: Tell us about the process of recording the songs ?
We've done all of our recordings ourselves and it's completely integrated into the song writing process.

Sometimes we even track and finish entire songs without ever even jamming on them live. Having the luxury of time and lots of cool old music gear allows us to use the recording/capturing process as it's own musical expression -i.e. re-amping drums through chorus and tape delays or vocals through spring reverbs etc etc.

Q. Which new bands do you recommend?
Jeremy and I play together in our friend Terry's band called Light Fantastic. We just released an album a few months ago. It's beachy and dreamy. I also play on and off with my good friend Tamaryn.

Q: Which band would you love to made a cover version of?
I've always wanted to do a Fleetwood Mac song but too many bands have done great covers of their songs already!

Q: What are your plans for the future?
HOPEFULLY playing a bunch of shows to support our new album, Sun and Skyway!!

Q: Any parting words?
Thanks to anyone who supports the music that enriches all of our lives!...and don't give up on your dreams. As Mos says "these things take time" or as Alan Vega said, "DREAM BABY DREAM"
*
*
*
Thanks