A Series of Circles with Stray Owls - An Interview 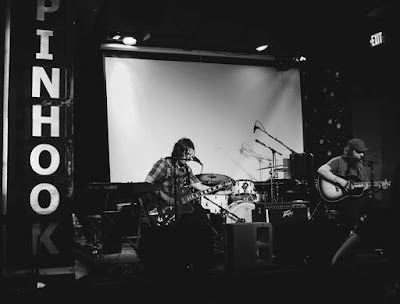 Q. When did Stray Owls start? Tell us about the history...
Officially, Stray Owls started in late 2014…but Scott and I had been talking about starting a band for close to 15 years before we could actually do it. That’s a long, boring story that eventually led to us re-grouping and really going for it in January of 2015. Everything kind of snowballed from there, and we haven’t looked back.

Q. Make a list of 5 albums of all time…
The Beatles (White Album)
Meddle – Pink Floyd
Under The Western Freeway – Grandaddy
A Ghost is Born - Wilco
In the Aeroplane Over the Sea – Neutral Milk Hotel

Q. How do you feel playing live?
We really enjoy playing live. Usually we play as a duo, but we’re currently playing with recording legend and North Carolina musical hero, Jerry Kee, on drums for a few shows. We recorded “A Series of Circles” with Jerry and he also played drums on the album. Playing with him really changes the dynamics of our songs and helps keep things fresh.


Q. Tell us about the process of recording the songs?
We record our basic guitar parts together, playing to a click track, and then build on the song with more overdubs from there. It just kind of depends on the song – maybe we’ll add keyboards or more guitars, maybe we’ll try backing vocals. The odd thing about “A Series of Circles” is that we recorded basic tracks and some overdubs for about seven songs, then waited a year until we went back to Jerry’s to finish those songs up, and record a few more. My wife was pregnant and we had our second child in the middle of making the album, so we had to kind of shelve it for a little while before going back to it. Time and money were the biggest factors (as they usually are), and delaying things put a degree of uncertainty in the air for a little while, but we got right back on track once we had the opportunity to finish things up…and we’re probably better for it.

Though, I don’t think we’ll take so long to record the next album.

Q: What band would you love to cover?
Grandaddy, Brian Eno, Wilco

Q: What are your plans for the future?
To keep playing shows, and to record and put out more albums. And, to have fun, what’s the point if you aren’t having fun?

Q: Any parting words?
Yeah, we’d like to thank our wives for being so cool. Even though we don’t really tour, we’re still away from home a lot because of the band. They put up with us chasing a dream that probably doesn’t always seem worthwhile and call us on our crap.