Brighter with Ancient Tapes - An Interview 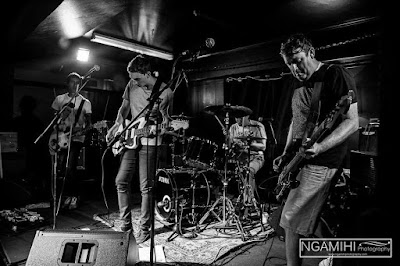 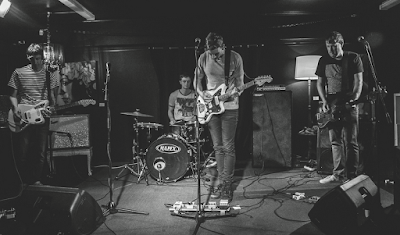 Q. When did Ancient Tapes start? Tell us about the history...
Sam and Rob: We started out in 2014, having met each other through work and football. We worked in the same classroom and found we both loved Ride and My Bloody Valentine and many others, and it went from there. It’s kind of been a bit on-again-off-again over the three years, due to band members moving away to live elsewhere and then coming back… we’ve cycled through 5 different drummers in that time. The current incarnation of the band seems to be fairly stable though.

Q: Who are your influences?
Sam: I would say our main influences are all of the alternative guitar bands from the 80’s and 90’s: My Bloody Valentine, Ride, Pavement, Blur, Drop Nineteens, The Wedding Present, that kind of stuff.

Rob: I’d go with that, though it’s fair to say each of us has our own extremes – those bands and their ilk are where our Venn diagram cross over.

Q. Make a list of 5 albums of all time…
Sam: Bloody hell… Loveless, Nowhere, Pink Moon, Marquee Moon, Siamese Dream. Those seem to be the ones that I always come back to.

Rob: Five is hard. In terms of the way they affected me at the time, probably Psychocandy, Slanted and Enchanted, Nowhere, Loveless and Lazer Guided Melodies by Spiritualized, which is far superior to Ladies and Gentlemen, if you ask me!

Q. How do you feel playing live?
Sam: As a band, I think we’re much more confident about how we set up live now, but it took us a while to figure it out. Part of that is probably my fault – as the singer I’m supposed to be the charismatic one in the centre of the stage, but I hate doing that. So now Rob acts as the frontman with all the crowd banter stuff, and I kind of just lurk in the shadows off to the side.

Rob: Frontman hmmm. I basically stand in the middle of the stage and try and say something worthwhile between songs, often about cricket. I was not made to perform at all. Hecklers are great, it gives you a base to start from and is something of a challenge. If it was up to me we wouldn’t have gapes between songs that we had to fill at all.

In terms of how you I feel playing live, it really depends on how the crowd buzzes off you and what you can actually hear on stage. Personally I have to concentrate a lot on stage on what I’m playing. I’m not so much a shoegazer, more of a fingergazer. More than anything, it’s really nice when the room is full and you see the crowd getting off on the noises you are making and I can hear all the others in just the right amounts.


Q. How do you describe Ancient Tapes sounds?
Sam: We try to write songs that are dynamic and layered. A lot of what me and Gareth do with our guitar playing is influenced by shoegazing, using lots of effects to create different textures – but we try to avoid the whole “constant wall-of-sound” thing that is often associated with that genre, by having quiet, more subtle sections within songs as well.

Rob: It depends really, I flit from ‘noisy guitar rock’ to the uninitiated to shoegaze-influenced indie-rock. Lyrically it’s quite emotional, but not emo in the Pete Wentz sense. There’s a band name right there btw. Most of the stuff we have written recently has been with a view to a slightly faster paced live set, but I’m certain it won’t always be like that.

Q: Tell us about the process of recording the songs ?
Sam: It started off as just a demo, basically – we recorded it all in Cam’s garage on his laptop, and just played the songs as we normally would live. We never really intended for it to be a proper release. But we got some good takes of the songs, even if they are a bit rough around the edges, and thought we might as well make them available. I kind of see it as something halfway between a demo tape and an EP.

Rob: The first EP, (Hummingbird), we did in a few hours with a friend all for the price of a bottle of whiskey but it came out ok all things considered. The latest demo was just as Sam said. Going forward we have a plan to record an album with our friend, sound engineer Scott Newth, in a neat studio on the outskirts of Hamilton, New Zealand. It’s all $ sensitive though so who knows what’ll happen and when!

Q. Which new bands do you recommend?
Rob: New Zealand is doing so well in producing new bands at the moment. I’m not sure which NZ bands people have heard of, so I’ll mention some old ones too. There’s the more traditional post-rockers Jakob, In Orbit and even my old band Sora Shima. Gareth records as sink\sink – check that out, it’s pretty amazing. Flying Nun Records is still leading the way in this country for alternative music though, and is in the mix again with some neat bands, the likes of Fazerdaze, Kane Strang, Mermaidens, and Aldous Harding. A massive shout out to The Bats too, we just played with them and they were incredible even after 33 years of being together in the same line-up. And also Cam (drums) other band Old Loaves.

Q: Which band would you love to made a cover version of?
Sam: We’ve done covers of Ride and Slowdive songs in the past, but I think it would be cool to do a cover of something more stylistically different from us… I’d love to do a cover of an Oasis song.

Rob: Strawberry Switchblade’s ‘Since Yesterday’. It’s an 80’s pop classic but I have a cunning plan for it…if the others let me!


Q: What are your plans for the future?
Sam: We’ve got some shows with The Wedding Present coming up in July, which we’re all hugely excited about as they’re such an amazing band, and a big influence for us. Beyond that, we’re going to be working on an album during the second half of this year.